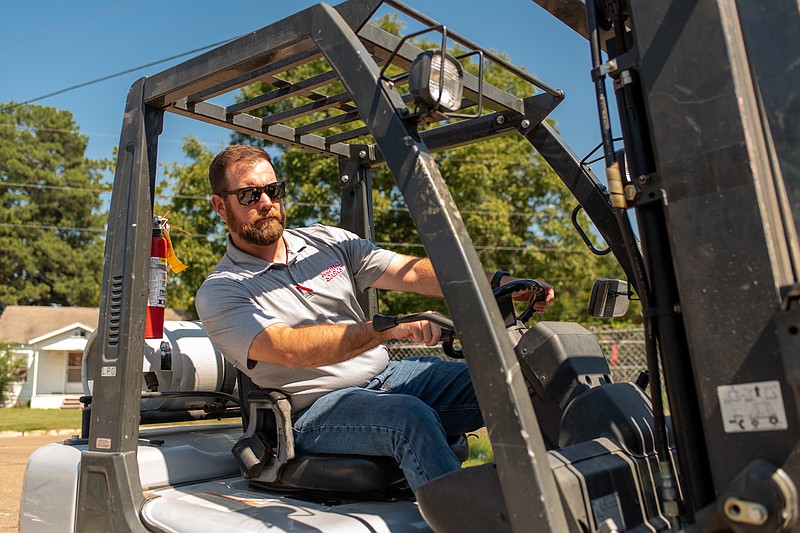 Editor's Note: This is the latest in an occasional series on young leaders and entrepreneurs trying to make a difference in Texarkana.

TEXARKANA, Texas -- Although he grew up in Nashville, Arkansas, HighTech Signs president Russell Sparks has called Texarkana home since 2014.

Sparks continues to immerse himself in civic organizations and community events in order to strengthen his connections to Texarkana and be a model citizen for his family.

Work-life balance is of the utmost importance to Sparks, who begins his day before the sun rises, sharply at 4 a.m., to squeeze in a morning workout prior to his day at the office. Taking care of his body and mind assists in Sparks' ability to effectively and accurately carry out any daily tasks, he says.

"You have to be able to shut it off at the end of the day, though," Sparks said. "I have to set that example for my boys. When I get home, it is their time."

Sparks manages approximately 10 employees of HighTech Signs in addition to carrying out his own work tasks. Together, the team has recently launched a friendly business competition with Whatley Sign Company, posting memes and photos of their respective office pets -- Casper the cat at HighTech and Phoebe the pup at Whatley -- on Facebook to generate a little internet traffic for both businesses.

It's a lot of fun for Sparks and his team, but he emphasizes that at the end of the day, quality work is what he hopes to instill in his employees.

"I try to tell them to take pride in their work," he said. "We come here to help other people. Our job is visual communication, connecting clients to their customers."

One important aspect Sparks touched on was that the sign industry makes an impact on the community, not just the business directly.

When Sparks isn't at HighTech, he's most likely involved with a community nonprofit like the Greater Texarkana Young Professionals, of which he is a former chairman, and Oaklawn Rotary Club, where he is the current president.

"Last year, GTYP painted the residences of Texarkana Resources," Sparks said. "Just the look on their faces. Some of them have been living there for 10-plus years and never had any customization to their rooms or anything. It was pretty amazing."

"Russell words harder and is more dedicated in everything he does than most people I know. GTYP certainly would not be remotely close to where it is today if it hadn't been for Russell," former GTYP Chairman Caleb Mudford said.

Sparks can often be found helping other local organizations when needed, such as the Texarkana Chamber of Commerce, Opportunities Inc., and also his sons' baseball and tee-ball teams.

"I hope to show my sons how to lend a helping hand, how to help somebody in need," Sparks said. "Nothing is going to change unless people step up to make things better."