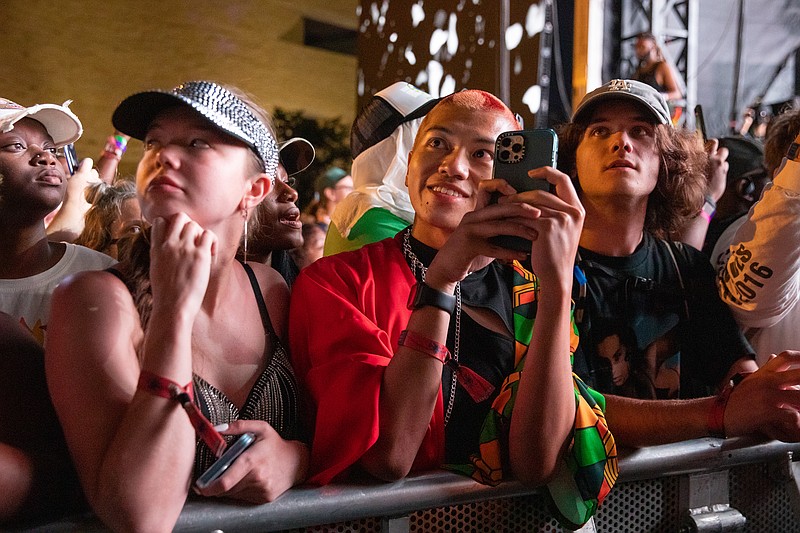 Fans watch Pharrell Williams perform at the Something In the Water music festival in Washington, D.C., on June 18. MUST CREDIT: Photo for The Washington Post by Amanda Andrade-Rhoades

Have you wondered why you love a particular song or genre of music? The answer may lie in your personality, although other factors also play a role, researchers say.

Many people tend to form their musical identity in adolescence, around the same time that they explore their social identity. Preferences may change over time, but research shows that people tend to be especially fond of music from their adolescent years and recall music from a specific age period - 10 to 30 years with a peak at 14 - more easily.

"Arousal is linked to the amount of energy and intensity in the music," says David M. Greenberg, a researcher at Bar-Ilan University and the University of Cambridge. Punk and heavy metal songs such as "White Knuckles" by Five Finger Death Punch were high on arousal, a study conducted by Greenberg and other researchers found.

"Valence is a spectrum," from negative to positive emotions, he says. Lively rock and pop songs such as "Razzle Dazzle" by Bill Haley & His Comets were high on valence.

Depth indicates "both a level of emotional and intellectual complexity," Greenberg says. "We found that rapper Pitbull's music would be low on depth, [and] classical and jazz music could be high on depth."

Also, musical attributes have interesting relationships with one another. "High depth is often correlated with lower valence, so sadness in music is also evoking a depth in it," he says.

We prefer music from artists whose personalities we identify with. "When people listen to music, they're being driven by how similar that artist is to themselves," Greenberg says.

"The match between the [personality of the] listener and the artist was predictive of the musical preferences for the artist beyond just the attributes from the music," Greenberg says.

Our cognitive styles and how we think may also predict what types of music we may like. A 2015 study by Greenberg and his colleagues distinguishes between systemizers and empathizers - people who understand the world through thoughts and emotions vs. people who are interested in rules and systems. "Empathizers tend to prefer sadness in music whereas [systemizers] prefer more intensity in music," Greenberg said. "A lot of IT [and] data science professionals [are] high on systemizing and also prefer really intense music."

While personality may be one determinant of our musical preferences, another could be the context. Minsu Park and his colleagues identified temporal patterns in listening behavior - people tend to listen to relaxing music in the evening and energetic music during the day. "This fluctuation is almost identical regardless of your cultural location and other demographic information," says Park, assistant professor of social research and public policy at New York University Abu Dhabi.

There also are age trends in how people engage with music.

Personality may influence our musical taste, but it's important to note that changes in musical taste do not indicate a change in personality. Even if we change what we listen to, we implicitly remain the same people.

"An introvert may change over time ... but ultimately their core [and] basis will be introversion," Greenberg says.