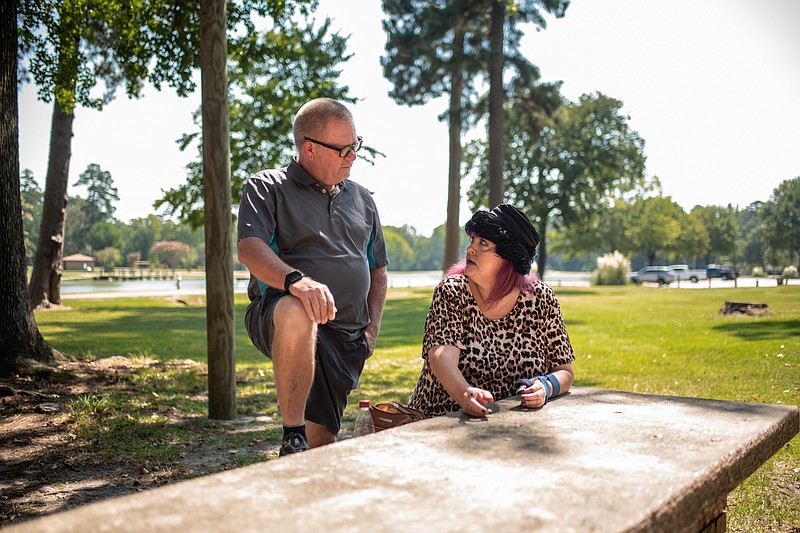 David Dahman and Catt Dahman sit Saturday, Sept. 24, 2022, at one of the filming locations for Catt's film "Sundown" in Texarkana, Texas' Spring Lake Park. Catt Dahman is set to start filming of her new movie "Z is for Zombie" this month. (Staff photo by Erin DeBlanc)

TEXARKANA --Texarkana native Catt Dahman, screenwriter and director for Ren Says Films, is making her hometown the headquarters for her film operations.

Using what resources are available in the community and region, Dahman has procured a network of actors, cinematographers, venues and businesses, artists, and other elements to make her films come to life.

"We hope for the same support and popularity that Dallas, Georgia and California have with the film industry, but on a tinier scale," Dahman said, referring to Texarkana.

Inspired by the grindhouse genre films from the '80s and directors like David Lynch and Rob Zombie, Dahman has worked on perfecting her craft through similar styles of storytelling.

She's expected to begin her fourth film, "Z is for Zombie," this month. Dahman can already claim three horror films as her work: "Pinup Zombies," "Sundown" and "Clann."

"'Pinup Zombies' will be finished by next summer and took a year to make. 'Sundown' is ongoing and should also be completed by the summer of 2023. 'Clann' should go to my manager in early 2023," Dahman said.

Through her film "Pinup Zombies," Dahman uses dark humor to explore revenge and how it's not always the desired outcome. "Sundown" is based on the infamous tale of the Phantom Killer from Texarkana, but retold with an unsettling twist. "Clann" is about how morality for the everyday person can be bent and molded to adapt to their natures and environment, while her newest endeavor titled "Z is for Zombies" is pretty self-explanatory.

"All my films have duality, power struggles, beauty within horror, and I try to break rules and cross lines to make people uncomfortable, which is what horror is about: living vicariously," she said.

Each movie can take about a year to complete, from filming to editing to the sale of distribution rights.

"It's a slow, delicate process," she said.

That process goes more smoothly thanks to Dahman's core crew, whom she routinely uses when filming, including actors, videographers, makeup artists and musicians in the area and nearby cities such as Dallas. That network has built her a tight-knit community of film industry professionals she can rely on to help perfect her craft and see her work through to fruition.

"I think about our youngest actress, Alvae Easterling, who is 9; she periodically calls me out on a scene she feels doesn't make sense or that she feels should be filmed in another location. Sometimes it takes fresh eyes," she said.

Dahman also spoke highly of the "King of Camera," Alex Jones, who brings each scene to life with his creative eye, and her assistant director, Tish Hicks, who helps read scripts and make changes.

"Tish often has ideas that I never considered," said Dahman. "She helps me fly and keeps me from having tunnel vision. She's also an actress who keeps me busy challenging her."

Recently, Dahman reached out to local band Phed, musicians Phoebe Warren and Ted Stone, and plans to feature their song "Devil At Your Side" in "Clann."

"It is a song I wrote that comments on the downfalls of the human experience, comparing our weaknesses and insecurities to a demon clutching at your shoulder that you just can't shake off," Warren said.

Most of the filming is done on site at the Dancing Ranch Farm on the outskirts of Texarkana and Fouke, Arkansas. Owners Ronnie Dancer and Susan Dancer make all kinds of accommodations for the film crew, including building sets and props for movie scenes.

"The ranch is all about all things scary and haunted. Together, we have added a donated RV and had movie sets built so that people can see the sets in the movie and also in real life," Dahman said. "The Dancers generously allow us the freedom to film while maintaining and securing our privacy."

Prior to movie-making, Dahman built an extensive skill of writing novels, with over 60 books and 12 short stories to her name.

"All my books are with various publishers, and I am a writer more than anything," Dahman said. "I went traditional publishing and I was picked up against the odds. I needed that validation from a big press."

When Dahman was previously a teacher, each summer she would write a novel or two. Once the internet became widely available, Dahman was able to use technology to her advantage and produced a nine-book zombie series. An Australian based publishing company would go on to purchase the series and commissioned Dahman for seven more horror novels.

"I write true crime, science fiction and have an upcoming nonfiction book about prison reform," she said.

Whether writing a screenplay or a new novel, one thing is certain.

"I write for intelligent viewers and never dumb down a scene or film," Dahman said.