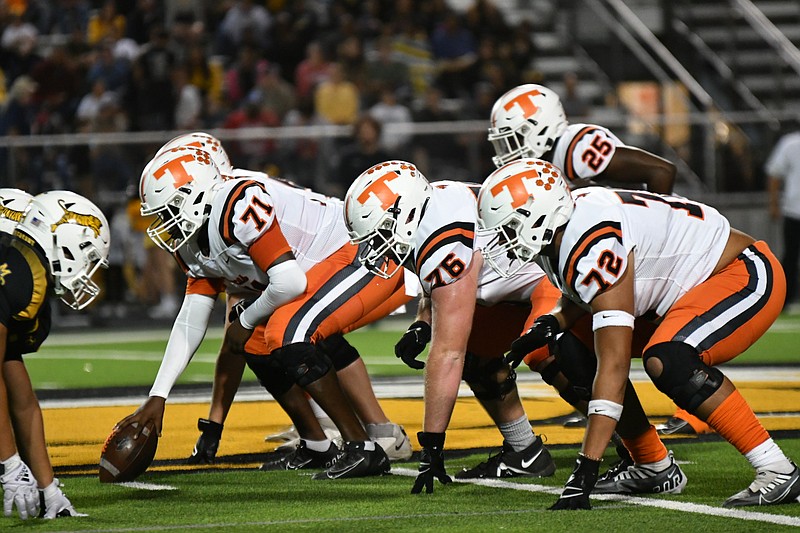 Texas High rolled up 493 yards of total offense, and Javari Johnson scored three times on runs of 60, 2 and 21 yards. He finished with 10 rushes for 131 yards.

Tradarian Ball added 17 totes for 102 yards and a score, and Brandon Hall hauled in seven catches for 81 yards and two scores. David Potter connected on 12-of-17 passes for 175 yards and three TDs, his third going to Xavier Dangerfield, who had two grabs for 63 yards.

Defensive back Tim Austin blocked a MP extra point, and Michael Mothershed returned it for a 2-point conversion. Worth McMillen also had a late rushing score.

Kyler Smith had five catches for 114 yards and two TDs to lead Mount Pleasant's offense, which finished with 260 yards. Xavier Hills also had an 82-yard kickoff return for a score.

Texas High scored on all three of its first-quarter drives to build a 21-0 lead over the home team.

THS outgained Mount Pleasant, 233-87, in total yardage before halftime, when the visiting Tigers led 21-6. Texas High had 185 yards of offense in the first quarter while MP had just 1 yard.

Johnson raced 60 yards on the first snap for Texas High just 1:29 into the game, and the sophomore tailback added his second touchdown at the end of a 7-play, 82-yard drive.

Hall capped the third THS campaign with his 16-yard scoring grab on the 10th play with 34 ticks left in the first.

Texas High was driving on its fourth possession and into the red zone, but a lost fumble halted the drive at the MP 20. Fifteen plays later, Smith caught a 3-yard TD from Mason McMinn to give the home team its only points, the score coming with 14 seconds until intermission.