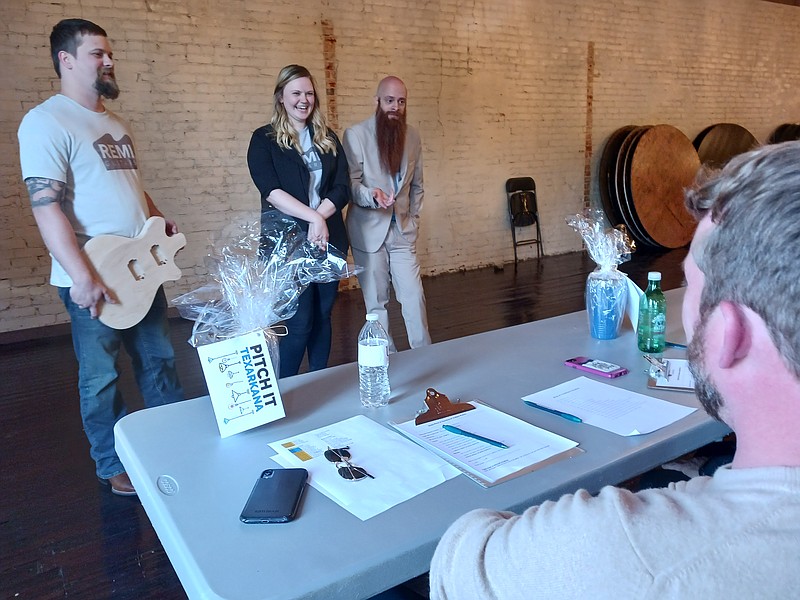 The crew of REMI Guitars run their idea past a panel of judges at Pitch It Texarkana on Thursday, March 31, 2022, at Crossties in Texarkana, Arkansas. REMI Guitars staff includes Daniel Rushing, Haley Rushing-Hill and Smokey Crabtree. (Staff file photo)

TEXARKANA, Ark. -- Preparations are underway for this year's entrepreneur-centered competition Pitch It Texarkana.

The prize money has increased, along with the incentive to enter, as the organizers plan to help coach and guide this year's winners to guarantee their success.

"This time we're going to require a bit more follow up after to make sure the money is being used for the business or to help move the business forward. The whole idea is to create jobs and create value and wealth in the community," spokesperson Leslie Ledwell-Dukelow said.

"We're doing a little more for this money because we have these wonderful community sponsors and businesses that are helping," Dukelow said.

According to Dukelow, Pitch It Texarkana was born out of Texarkana's Strategic Doing organization, which operates as a non-hierarchical cooperative to improve the community by playing to the strengths of its members.

Dukelow said any person that is over the age of 18 can apply to pitch an idea, they just have to video their three minute pitch and submit it ahead of time so the judges can narrow down the in-person viewing pool to the highest quality in the competition.

"We gave them (the judges) scoring cards this year so they can see what they're graded on (in person). There are no PowerPoints. You can bring your model, whatever it is, but no computer screens," Dukelow said.

Dukelow said the overall theme of the competition is to help imagine what Texarkana USA could look like as a magnet for talent and entrepreneurship for the region, and to encourage those who did not win to consider trying again.

"I just want everyone with even just an inkling of an idea to apply. It's not that onerous of a process, and it's getting out there and showing the world your ideas. This is a pitch. It isn't a business plan," Dukelow said.

To learn more about Pitch It Texarkana, visit pitchittexarkana.com.