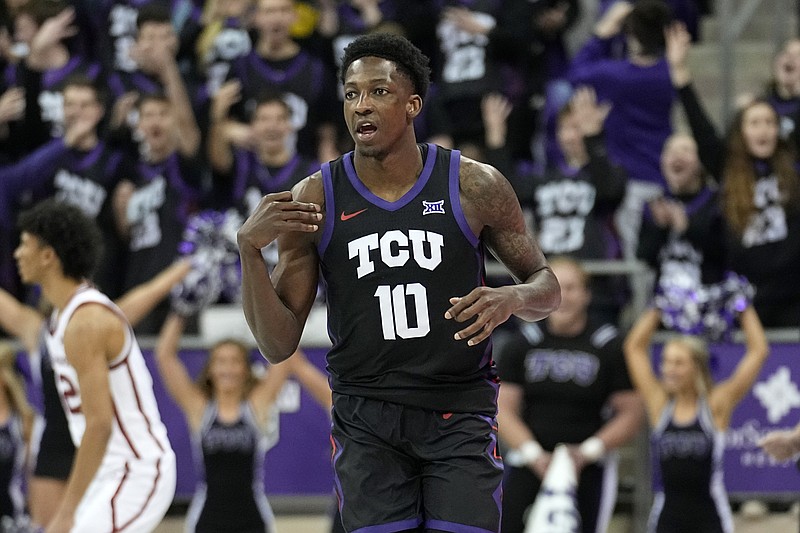 FORT WORTH, Texas -- Mike Miles Jr. scored 23 points and 11th-ranked TCU led throughout in a 79-52 win over Oklahoma on Tuesday night.

Even without injured big man Eddie Lampkin Jr., the Horned Frogs followed up their 23-point win at then-No. 2 Kansas by scoring the game's first 11 points back at home.

Damion Baugh and Micah Peavy added 13 points for TCU (16-4, 5-3 Big 12). Emanuel Miller grabbed 10 rebounds while Lampkin, the team's leading rebounder, sat on the bench with a protective boot on his left foot because of a high ankle sprain sustained in the win over the reigning national champion Jayhawks three days earlier.

The Frogs had an 11-0 lead at the first media timeout four minutes into the game, when Oklahoma already had four turnovers that led to eight points. They also scored the first 11 points after halftime, capped by an impressive play that began with a blocked shot by Shahada Wells and ended with a dunk by Peavy to stretch the margin to 55-27.

The ball appeared to be headed out of bounds after Wells swatted away a 3-pointer attempted by Grant Sherfield. But Rondel Walker grabbed it near midcourt and threw ahead to the breaking Peavy.

Oklahoma: The Sooners, now 0-5 vs. Top 25 teams, had three turnovers before getting off their first shot. That was an air-ball 3-pointer by Sherfield, the transfer to Oklahoma who is from Fort Worth. Sherfield, who entered as the leading scorer for the Sooners at 17 points a game, was held to five on 2-of-11 shooting -- only 1 of 8 on 3s.

TCU: The Frogs built an early 20-8 lead even while missing 7 of 8 shots and going nearly 5 1/2 minutes without a basket after Baugh banked in a 3-pointer for an 8-0 lead. TCU scored eight consecutive points on free throws, including Miles twice getting fouled on a 3-pointer and making every free throw. Miles had 17 points by halftime, including 10-of-10 free throws.

The TCU football team was recognized at halftime, with coach Sonny Dykes and the team surrounding the trophy from the College Football Playoff semifinal Fiesta Bowl the Frogs won over Michigan. Highlights of that game were shown on the video board, but there no specific mention of the 65-7 loss to Georgia in the CFP national championship game that followed that. TCU's 13 wins matched the school record.

Oklahoma plays at No. 2 Alabama on Saturday in the SEC/Big 12 Challenge.

TCU travels to Mississippi State for its SEC/Big 12 Challenge game. 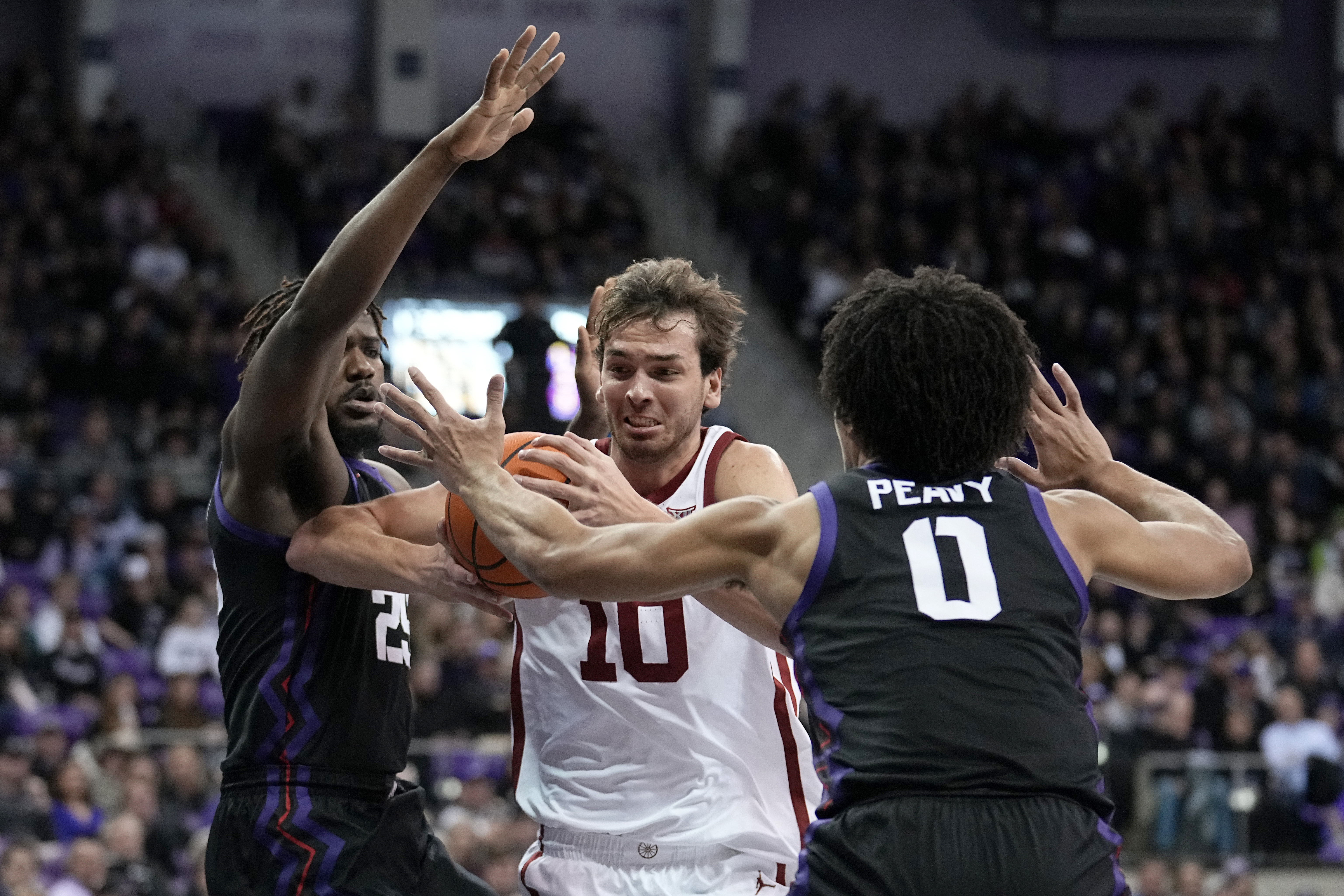 Oklahoma forward Sam Godwin (10) drives to the basket between TCU's Souleymane Doumbia, left, and Micah Peavy (0) during the first half of an NCAA college basketball game Tuesday, Jan. 24, 2023, in Fort Worth, Texas. (AP Photo/Tony Gutierrez) 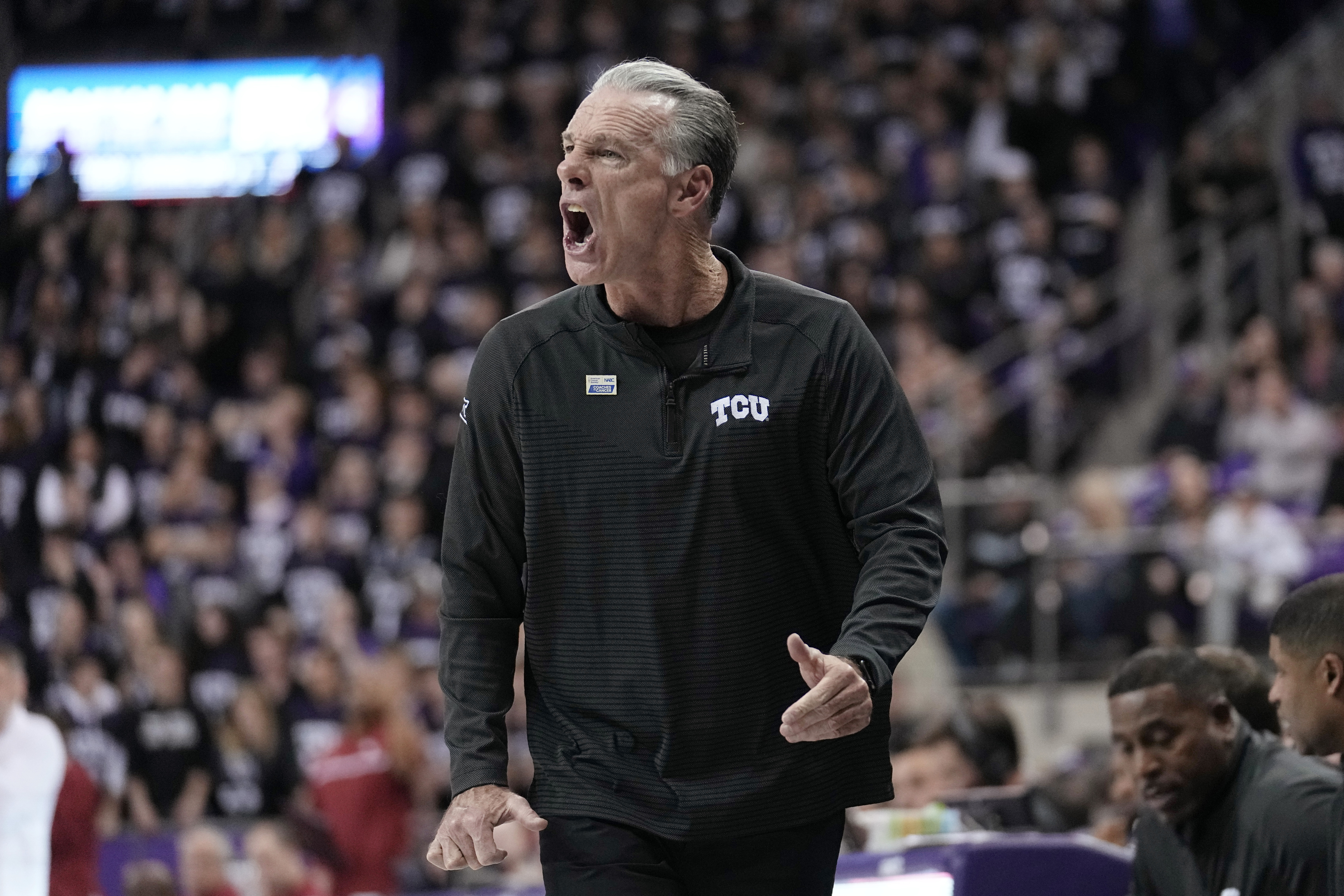 TCU coach Jamie Dixon shouts to players during the first half of the team's NCAA college basketball game against Oklahoma, Tuesday, Jan. 24, 2023, in Fort Worth, Texas. (AP Photo/Tony Gutierrez) 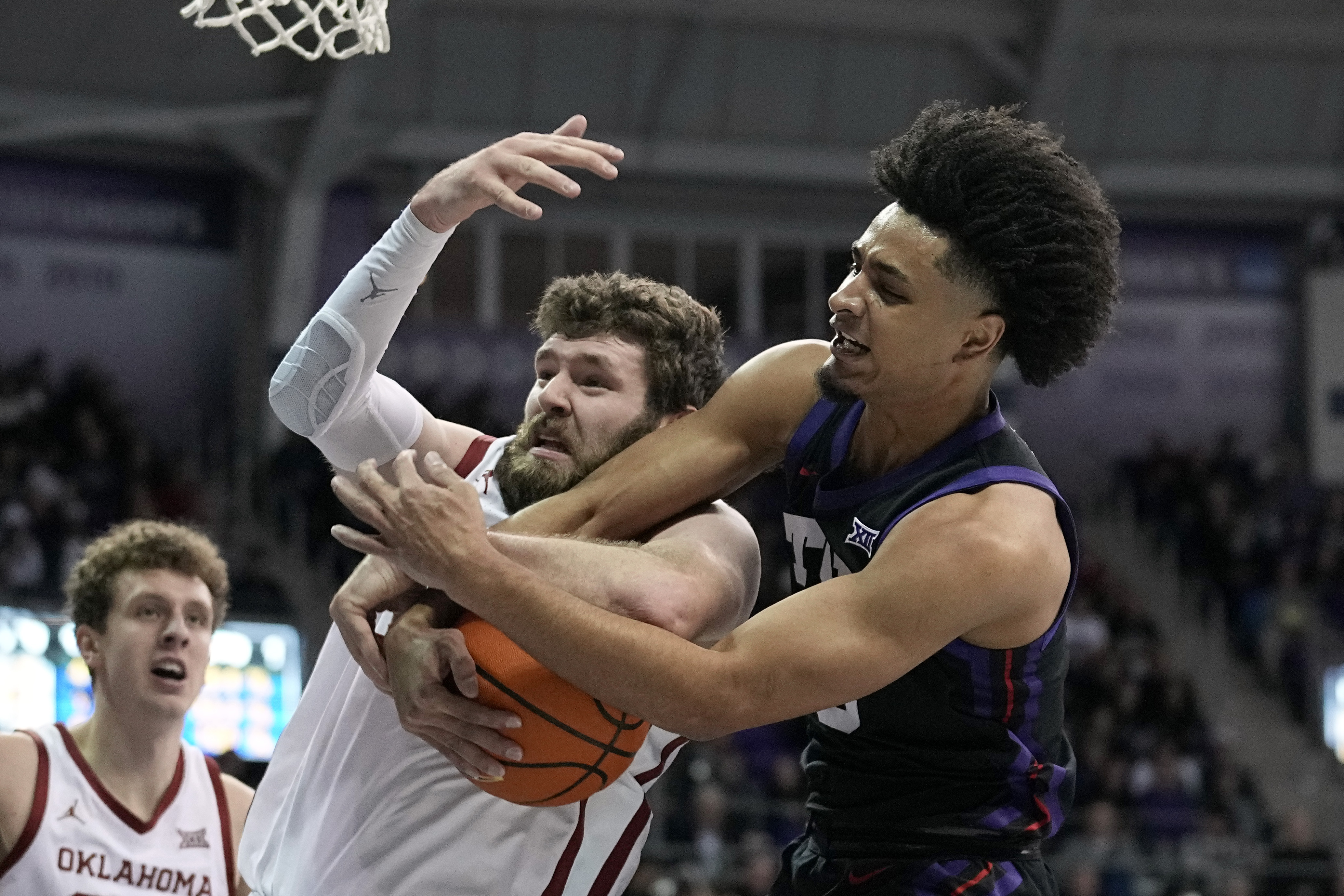 Oklahoma forward Tanner Groves, left, and TCU guard Micah Peavy, right, compete for control of a rebound during the first half of an NCAA college basketball game, Tuesday, Jan. 24, 2023, in Fort Worth, Texas. (AP Photo/Tony Gutierrez) 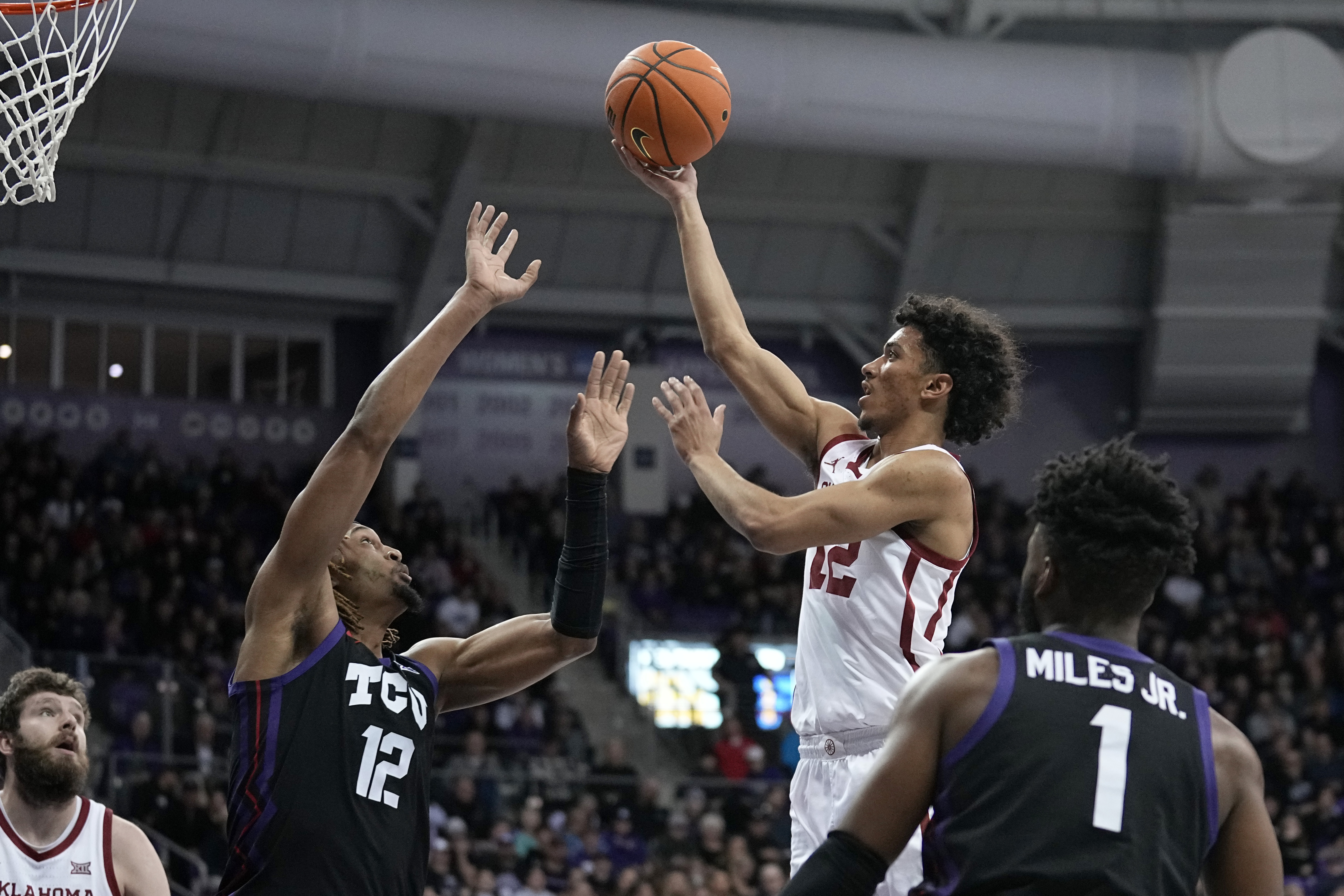 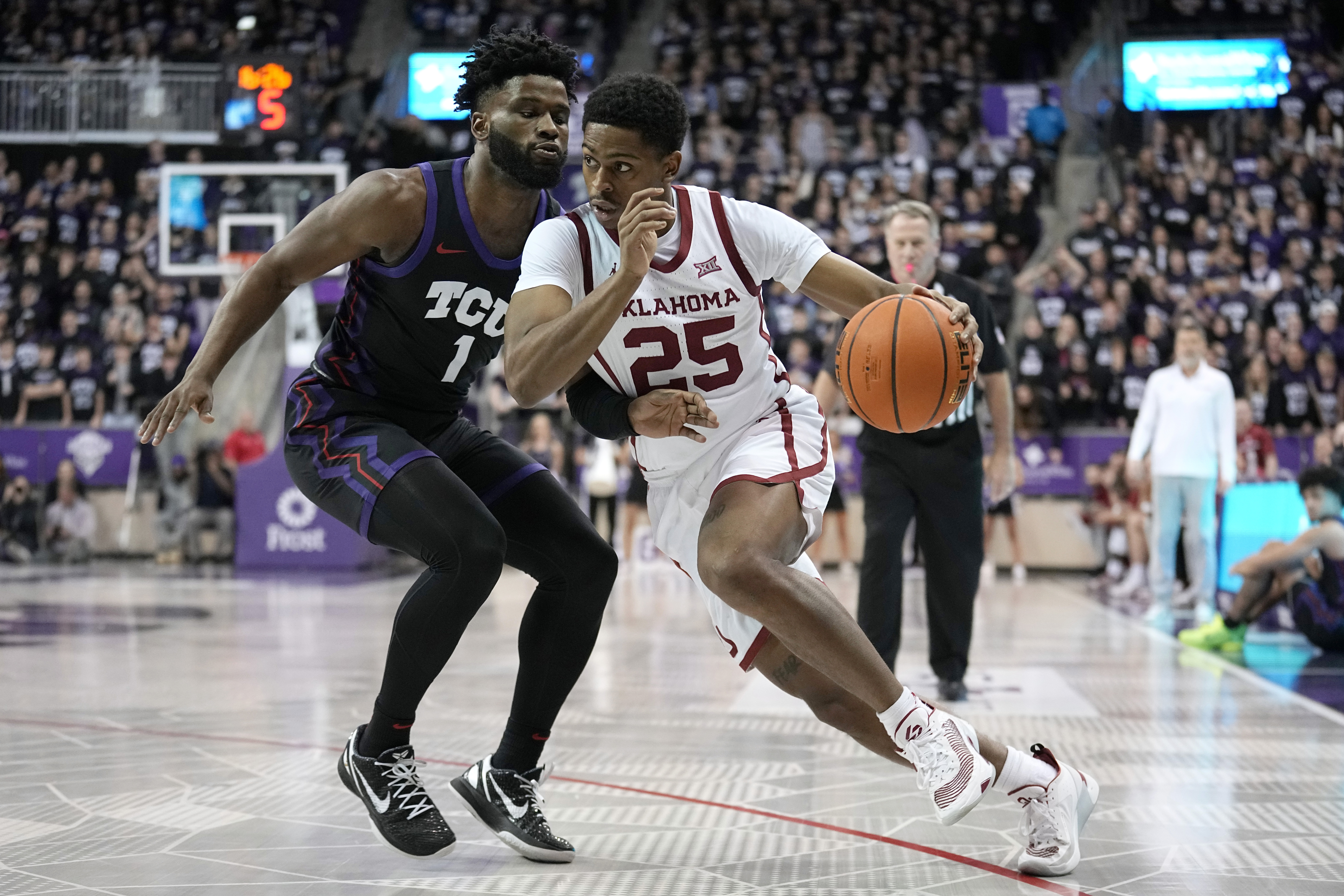 Print Headline: No. 11 TCU lead throughout in 79-52 win over Oklahoma