Professors once disdained Wikipedia, but now assign their science students to rewrite it 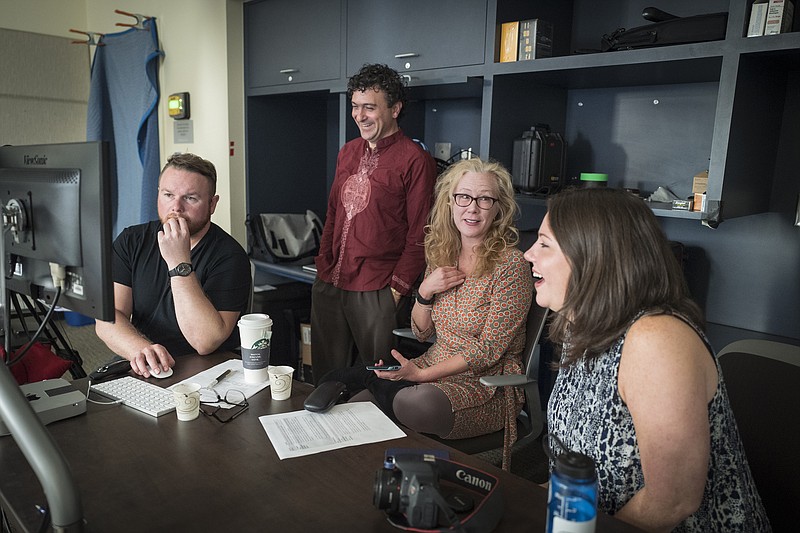 From left, video tech Kyle Van Auker at UC San Francisco, medical school professor Amin Azzam, Tina Brock, Dean of the School of Pharmacy and Jami Mathewson of the Wiki Education Foundation discuss the recording of videos on the integration of Wikipeida pages on medical topics with medical students refinement of the content on the pages. Azzam is teaching a course on the subject.

LOS ANGELES-The time had come to choose a major at Caltech, and Alice Michel had a notion that intrigued her. But when she looked it up on Wikipedia, what she got was a whole lot of gobbledygook.

It was, she learned, an "interdisciplinary field of scientific research." It had something to do with "the biosphere, the lithosphere and/or the atmosphere."

Here was a subject worthy of an entire area of study on campus, but its Wikipedia entry was "totally useless."

Lucky for geobiology, Michel wasn't deterred. And before she graduated, as a senior project, she righted the wrong.

She read through dozens of research papers, reviewed her own notebooks, surveyed her peers and turned the geobiology entry into a 4,200-word article-complete with diagrams, photos and hyperlinks to related topics.

She was, in fact, one of hundreds of science students in the country who improved Wikipedia as part of their college coursework, in what many see as a boon for both the online encyclopedia and science education.

Immersed in their own worlds of chemical compounds, differential equations and complicated lab reports, scientists have long struggled with translating what they know to the world. But professors are increasingly finding ways to train those entering scientific fields to be better communicators. After all, how useful is a scientific breakthrough if no one understands it-or even knows about it?

"It was exciting to share what I got out of Caltech with the public, with perhaps people like a younger version of myself," said Michel, who is now in Namibia doing fieldwork.

Chances are good. Wikipedia has 500 million readers across the globe. Its content surfaces near the top of just about any Google search.

Since the crowdsourced encyclopedia first hit the internet in 2001, tens of millions of people around the world have been empowered to anonymously create, edit and write about topics minuscule and enormous, well-known and obscure.

The quantity has been unbeatable, the quality sometimes far less so-a matter of significance for such topics as medical ailments and prescription drugs that frequently are searched for by those in need of information.

Professors, once averse to Wikipedia, now see its potential.

Midterm papers and literature reviews-usually read only by the instructor or perhaps a teaching assistant-can be turned into comprehensive, accurate Wikipedia entries.

"College students are in this great sweet spot where they're picking up a lot of knowledge about science in their field, but they're also still connected to that sense of not knowing. That's a great time to write for the general audience," said Eryk Salvaggio of the Wiki Education Foundation, a San Francisco-based nonprofit, spun off from the nonprofit that runs Wikipedia, whose goal is to train professors to improve the quality of Wikipedia's content.

The depth of knowledge on Wikipedia is uneven. A lot depends on how many people are passionate enough about a topic to volunteer their time, Salvaggio said.

So far this year, 240 college science classrooms in the U.S. and Canada have improved the content of more than 2,500 articles and created 247 new ones, he said. All told, these webpages have been viewed more than 81 million times. The foundation's goal is to double these numbers by the end of 2016, which it has dubbed the Year of Science.

To accomplish this, Wiki Ed, with the help of Google and the Simons Foundation, which seeks to advance research in math and basic sciences, has been recruiting at conferences held by professional groups such as the American Society of Plant Biologists and teaming up to host Wikipedia-editing marathons with the American Association for the Advancement of Science.

Also helping the cause is what seems to be a generational shift in the perceived value of clear, accessible science communication.

In past decades, the attitude was "real scientists don't talk to the public about their work. You're not awarded for popularizing science," said Deborah Blum, director of MIT's Knight Science Journalism Program. "And we're not past that entirely."

But, she said, "we're all going to be better off if thinking about how we talk about science in an open, transparent, understandable way is integrated into the way we train scientists from the beginning."

A good article, Tienson tells her students, should be simple enough that someone in high school can understand it, but also well-defined and comprehensive enough that she can get something out of it too.

With the help of online tutorials and on-call experienced entry writers known as Wikipedians, students first learn how to follow the website's (surprisingly) strict protocols. Citations, for instance, are crucial. For the final version of an entry-about two pages long, single-spaced-Tienson requires at least 10 references. To track down the most reliable sources, students usually have to read many more.

Tone is key-just the facts, no arguing a particular hypothesis. Then there's clarity.

"You have to know the jargon well enough to be able to replace it with a more simple, concise explanation," Tienson said.

Since she introduced the assignment last fall, 33 students have expanded articles on Wikipedia. Before publication, each article was peer-reviewed by two classmates.

The assignment has led to unexpected discoveries. Last quarter, one student found that the page for Mary Bernheim, the British biochemist who discovered monoamine oxidase, an enzyme in the human body that prompted new studies on how it might affect disorders such as schizophrenia, was four sentences long.

Tienson plans to encourage students this fall to expand more pages on women in science, whose entries often include little more than "who they married, how many children they had."

At the University of California, San Francisco's School of Medicine, Amin Azzam teaches a Wikipedia course that he sees as a call to action.

"It is part of our social contract with society, as physicians," he said, "to be contributing to Wikipedia and other open-access repositories, because that is where the world reads about health information."

A student, Michael Turken, pitched the idea to Azzam in 2012. Turken's friend had asked him how long someone with HIV could get false negative readings on a test. Wikipedia said two weeks, but Turken checked medical references and realized that was wrong. Since all the accurate information was already in front of him, he edited the page.

Together, Turken and Azzam developed the course as an elective for fourth-year medical students. For an entire month, they work to improve the information available for high-traffic topics such as opioid overdose and vascular dementia.

In March, during his most recent class, Azzam had seven students work together on the article for hepatitis, a massive topic with inconsistent information on Wikipedia.

The class forces his students to think about medical information in a new light. Should they, for example, list the symptoms in alphabetical order or by most common or most serious? Should they include all the symptoms, even the ones that rarely occur, or would that raise undue alarm?

"That wrestling with what to include and how to include it, that is exactly the reason why med students should be doing this work," said Azzam, who co-authored a report recently published in the journal Academic Medicine, titled "Why Medical Schools Should Embrace Wikipedia." "This is how doctors have to talk to patients."