Travelers look for spots where three states touch: Cass County has one of the 65 meeting spots in the country 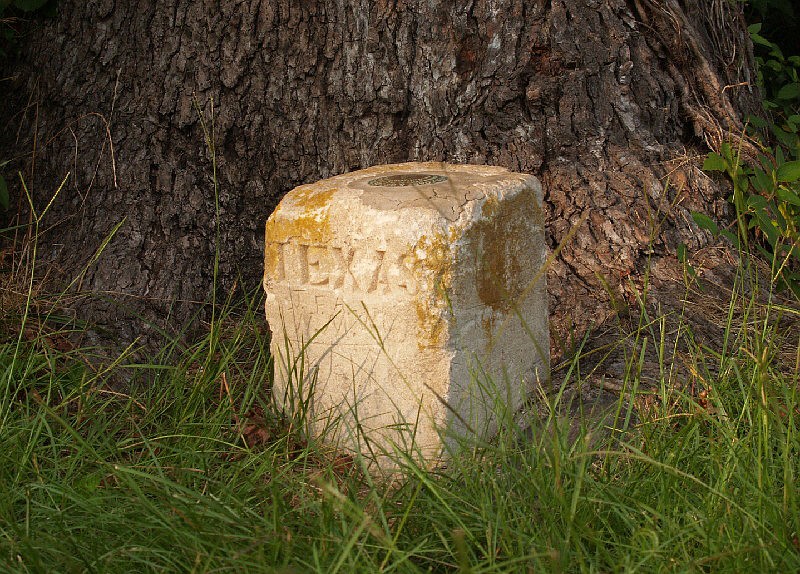 The U.S. Coast and Geodetic Survey triangulation benchmark at Three States is the only way one would know this is the precise point at which Texas, Arkansas and Louisiana meet.

THOMPSON, Conn.-Brian Butler is a tripointer.
The 63-year-old lives in Holliston, Mass., about 20 miles from the Connecticut and Rhode Island borders. That's where he picked up the unusual hobby of visiting spots where at least three states or three Canadian provinces meet.
Butler says he was hiking near his home in the Douglas State Forest with a topographical map in 1998 when he decided to look for the point where the three southern New England states come together.
He found it at the top of a rocky hill, in the middle of the forest, near an old railroad bed. It was marked by a 4-foot granite obelisk engraved with the abbreviations for Massachusetts, Connecticut and Rhode Island, and the date 1883.
"As soon as you see that thing, you're hooked," he said. "You say, 'Wow, I wonder if there are more of these things."
There are.
One such spot is found near Texarkana, Texas, in the Three Corners community near Bloomburg, on state Highway 77, also known as Louisiana Highway 1. A 1930 U.S. Coast and Geodetic Survey stone marks the spot where Texas, Arkansas and Louisiana meet. Behind the marker on the Texas side is a derelict building. On the Arkansas side there's a package store, and in Louisiana the road goes off to Vivian and Shreveport.
Butler did some research and found 65 such spots where at least three state borders intersect and another four in Canada, where provinces meet. Some are marked with monuments, others with survey markers, and some aren't marked at all. There are 38 on land, and most are in remote areas.
Butler estimates he and his brother, Gregg, have visited between 35 and 40 tripoints. There have been some adventures along the way-hiking, boating and sometimes flying into remote areas.
They had to use metal rods to poke in the sand to find the marker for the Massachusetts-Vermont-New Hampshire tripoint, which was buried when a dam was built along the Connecticut River. They had to talk their way into a refinery, which sits on the intersection of New Jersey, Delaware and Pennsylvania.
They took an inflatable kayak down the Mississippi to find several tripoints located on the water.
The capstone of his adventures, Butler said, was a trip to Canada to find where Saskatchewan, Manitoba, the Northwest Territories and Nunavut meet.
"You drive as far north as you can on pavement in Saskatchewan," he said "Then you drive on a gravel road for 260 miles to an airport. Then you take a seaplane to a lake. Then you hike," he said. "I don't think we're ever going to beat that one."
Butler documents the adventures on his website, the Corner Corner.
Surprisingly, he has never been to the most famous multipoint on the list, the Four Corners monument where Arizona, Colorado, Utah and New Mexico come together.
There is no one governmental body responsible for the upkeep of monuments, and some, like Four Corners, are in much better shape than others.
Dan Webb, the chief border surveyor with the U.S. Bureau of Land Management in Utah, helped place a granite monument on the Utah-Arizona-Nevada corner last fall with cooperation from all three states. It replaced a deteriorating sandstone monument that was erected in 1901.
The spot is about 15 miles off Interstate 70 and hard to access, even with a four-wheel drive vehicle, he said. But there were flags in the ground and other indications that tourists had found the spot.
"Just in the few-month period that we were working on this, we would have a group of ATVers come up almost every day to talk to us about it," he said. "And they were there just to find that corner."
In Thompson, Conn., town officials have worked for the last several years to improve access to the southern New England tripoint, where Connecticut, Rhode Island and Massachusetts meet.
Visitors can now hike or ride a bicycle down the stone-dust covered Airline Trail to a hiking trail created by the town that leads to the tripoint.
"It used to be very hard to find," said Charlie Obert, with the town of Thompson's Trails Committee. "Now there is a very nice sign at the bottom of the hill pointing the way."
The Texarkana Gazette contributed to this story.