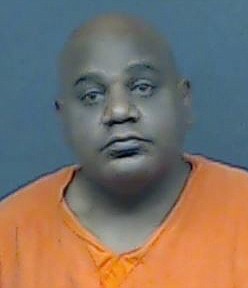 A former Waldo, Ark., police chief was arrested Sunday by a Texas Parks and Wildlife officer in Bowie County, Texas.

Robert Eugene Philson, 52, was stopped after Game Warden Shawn Hervey allegedly observed him drive a white passenger car at a high rate of speed in the wrong direction on Farm to Market Road 989, according to a probable cause affidavit used to create the following account. Philson allegedly crossed the center and fog lines of the road while driving the wrong way and made a wide turn onto Farm to Market 2516.

Hervey pulled Philson over on George Thomas road after allegedly watching him drive erratically. Hervey's report describes Philson as smelling strongly of alcohol with slurred speech and red, watery eyes. Philson allegedly told Hervey he was leaving his daughter's graduation and had consumed a single beer.

When Hervey asked him to get out of the car, Philson allegedly stumbled and fell against the sedan.

"Mr. Philson then informed me he was the police chief for Waldo, Ark.," the affidavit states.

According to news reports published in the Arkansas Democrat Gazette, Philson was fired by the Waldo mayor in January 2015 for unknown reasons.

While Philson allegedly claimed he had consumed one, 25-ounce beer, Hervey allegedly found a spilled cup of ice next to an open, partially consumed bottle of Paul Masson brandy in the floorboard behind the driver's seat. According to the affidavit, Philson was unable and/or unwilling to perform field sobriety tests at the site of the traffic stop.

"Mr. Philson continued to state he was a police officer and he always just gave officers a ride home," the affidavit states. "Mr. Philson then changed his story to he was retired from Waldo P.D. and is now was a special investigator with the state of Arkansas at the local ADC (Arkansas Department of Correction) unit in Texarkana. Throughout the contact with Philson he tried to use his position as police officer or investigator to influence our decision on whether to arrest him."

Philson allegedly failed to cooperate when officers attempted to administer a breathalyzer at the Bi-State Justice Building in downtown Texarkana following his arrest for driving while intoxicated and a violation of Texas law which prohibits open containers of alcohol in a moving vehicle. Both offenses are misdemeanors.