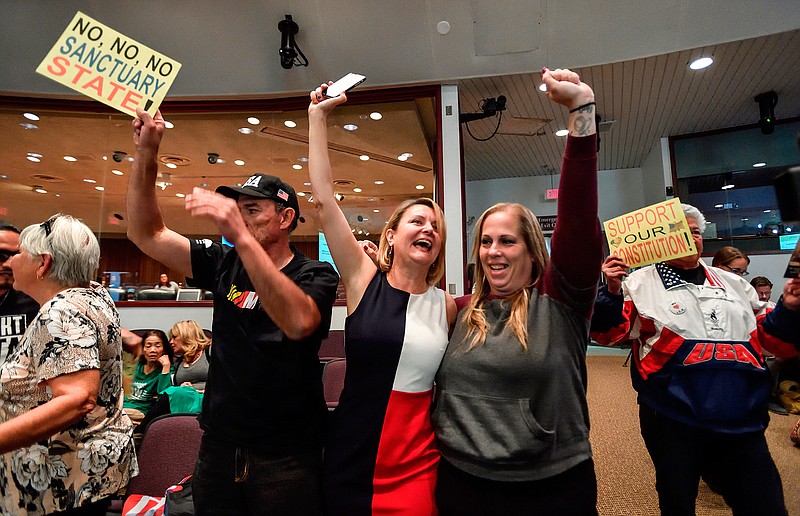 David Hernandez, left, Genevieve Peters, center, and Jennifer Martinez celebrate after the Orange County Board of Supervisors voted to join the U.S. Department of Justice lawsuit against the State of California's sanctuary cities law (SB54) during their meeting March 27 in Santa Ana, Calif. More local governments in California are resisting the state's efforts to resist the Trump administration's immigration crackdown, and political experts see politics at play as Republicans try to fire up voters in a state where the GOP has grown weak.

SANTA ANA, Calif.-More local governments in California are resisting the state's efforts to resist the Trump administration's immigration crackdown, and political experts see politics at play as Republicans try to fire up voters in a state where the GOP has grown weak.

Since the Jeff Sessions-led Department of Justice sued California last month over its so-called "sanctuary state" law limiting police collaboration with immigration agents, at least a dozen local governments have voted to either join or support the lawsuit or for resolutions opposing the state's position. Those include the Board of Supervisors in Orange County, which has more than 3 million people.

More action is coming this week, with leaders in the Orange County city of Los Alamitos scheduled to vote Monday on a proposal for a local law to exempt the community of 12,000 from the state law. On Tuesday, the San Diego County Board of Supervisors is meeting to consider joining the Trump administration lawsuit.

Immigration has been a hot topic across the country since President Donald Trump campaigned in 2016 on promises of tougher enforcement and a wall on the U.S.-Mexico border. It has been a lightning rod issue in California far longer.

The state passed a measure backed by Republican Gov. Pete Wilson in the 1990s to deny public health care and education to immigrants in the country illegally. It was later overturned but left a lingering resentment among the state's growing Hispanic population.

In recent years, California Republicans have taken a less strident approach to immigration in a state where one in four people are foreign-born. But the Trump administration lawsuit has energized many in a party that has been rendered nearly irrelevant at the state level, where Democrats control every key office.

"When the attorney general of the United States decides to take a firm position against it, I think that gave a signal to a lot of us that, 'Hey, California is on the wrong side of this thing,'" said Fred Whitaker, chairman of the Republican Party in Orange County. He also is a councilman in the city of Orange who proposed a local resolution on the issue that passed last week.

"Politics is very much about emotions, especially in midterms," he said. "I think it was only a matter of time when people went back to the issue that actually hits the nerve in the Republican base these days more than any other."

Under Democratic leadership, California has enacted a series of laws in recent years aimed at helping immigrants, including issuing driver's licenses regardless of legal status and assisting with tuition at state universities. After Trump was elected, lawmakers passed the measure to limit police collaboration with federal immigration agents.

Immigrant and civil rights advocates applauded the measure, known as SB54, as a way to encourage immigrants to report crime to police without fearing deportation. Critics said it would make it too hard for federal agents to find and deport ex-convicts who are a danger to communities.

Most of the local governments siding with the Trump administration are in Orange County, an area once considered a GOP stronghold but that voted for Hillary Clinton in the 2016 presidential election. But it's starting to spread.

Escondido in neighboring San Diego County has voted to support the federal lawsuit and last week the small city of Ripon in the state's Central Valley did the same.

In many cases, meetings on the issue have drawn boisterous crowds. Anti-illegal immigration activists have traveled from city to city to attend, heightening tensions with those who want their communities to support immigrant-friendly policies or stay out of the fray.

In response to the controversy, some local governments have taken the opposite approach. Leaders in Santa Ana, an Orange County city home to about 330,000 residents, voted to support California in the lawsuit.

Some of the supervisors pushing the issue in Orange and San Diego counties are Republicans running for Congress and they may see this as a way to generate needed enthusiasm, said Louis DeSipio, a political science professor at the University of California,
Irvine.

"The mobilization that could come from introducing immigration debates into county political races may be a critical element in a year like 2018 when Democrats will likely be more mobilized than Republicans," he said.