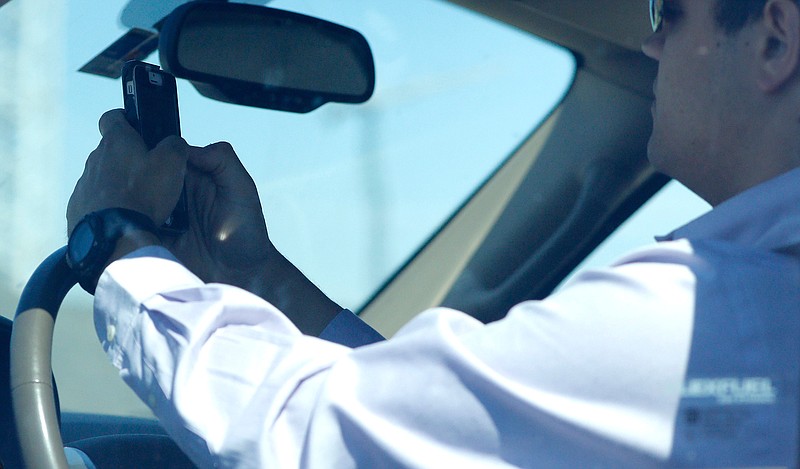 A man looks at his phone July 16, 2015, while driving down Woodall Rodgers Freeway in Dallas.

The victims include a 23-year-old highway construction worker in Washington state, a 13-year-old Michigan boy riding in his older sister's car and a Minnesota school bus driver picking up the morning newspaper in front of his home.

All were killed in recent years by distracted drivers who had been texting or otherwise looking at their phones. Yet none of the drivers responsible for those deaths has been ordered to spend more than a few days in jail.

Although there are no national statistics on the results of prosecutions brought against distracted drivers who kill or severely injure people, light punishment appears to be the norm. A review by FairWarning of prosecutions of distracted drivers-cases gleaned from news reports over the past five years that together involved more than 100 deaths-found that few were jailed for more than two months, or fined more than $1,000.

Safety advocates and researchers say tougher penalties alone aren't likely to get drivers to put down their phones.

But as with drunken driving a generation ago, they say, stiffer penalties could reduce the reckless behavior, if the tougher punishment is combined with education programs, peer pressure and technology to disable motorists' wireless devices while they are driving.

Nearly one-third of drivers ages 18 to 64 read or send text or email messages while at the wheel, according to the U.S. Centers for Disease Control and Prevention. Distracted driving causes almost 3,500 deaths and 400,000 injuries a year, the National Highway Traffic Safety Administration says.

In 2015, the agency estimated that nearly 500 deaths involved the use of cellphones, but experts believe the real number is much higher since the federal database relies on often incomplete information in police reports. Other distractions-such as eating while driving-also figure in some of the crashes.

"This is so prevalent and so very dangerous," said Amy J. Freedheim, a prosecutor in King County, Wash. "We've got to address it. We can't afford not to. All it takes is just a moment of drift and you've altered your life and you've ended somebody else's life."

The National Highway Traffic Safety Administration last May published a guide outlining the best methods to win convictions. It was prepared by a team of eight prosecutors, including Freedheim, with police officers and traffic safety specialists from across the nation.

"Sending or reading a text message can take the driver's eyes off the road for an average of 4.6 seconds," the publication says. "At 55 miles per hour, the vehicle will travel the length of a football field without any visual guidance."

The NHTSA guide encourages police to consider using special evidence bags for cellphones to preserve their data and reduce the chance that the information would be lost because of outside interference or static electricity.

It also advises police to demand electronic records from wireless providers, who typically won't release them without subpoenas, and get statements from witnesses and the suspect driver.

"The early interview may reduce the opportunity to fabricate or conspire with others," the manual says.

Yet no matter how thorough the criminal investigation, experts say, distracted driving is a far more difficult to prosecute than drunken driving-and not just because it is more difficult to prove than a motorist was texting at the moment of a crash than to demonstrate, with the black-and-white results of a field sobriety test and Breathalyzer or blood test, that a driver was intoxicated.

Only in the rare case of an eyewitness report or admission by a motorist will police know that a cellphone was involved.

Tougher sanctions would also require some legislators, litigators, judges and juries to ignore their own behavior. Jay Winsten, associate dean of the Harvard School of Public Health, said, "There but for the grace of God go I-am I really prepared to send someone to jail?"

Freedheim conceded that more severe penalties will remain out of reach unless public perception changes.

Most people "are getting the message that texting and driving is injurious," she said. "But everybody thinks they are the safe person."

Winsten said, "Part of the challenge is that there is no stigma connected or associated with a distracted driving offense. There's no shame.

"I'm at a reception or cocktail party and someone asks, what are you working on and I say distracted driving and they're more likely than not to say, 'Yeah, I'm probably one of the worst offenders."'

For drivers who "are very hooked" on their smartphones, "there is no punishment stiff enough to change that behavior," said Ramsay Brown, co-founder and chief operations officer of Dopamine Labs in Venice, Calif., an artificial intelligence software firm. "You need to find some way to make it cool to get angry at your friend when he's texting and driving. You need to make distracted driving wickedly unsexy."

Public attitudes tended to be similarly blase toward drunken driving until the 1980s. "People would joke about how drunk they were when driving," Winsten said. But then Mothers Against Drunk Driving stepped in and drew widespread attention to the problem. By swaying public opinion, MADD helped win tougher legal sanctions and higher drinking ages in some states, and highlighted such alternatives as designated drivers.

Most prosecutions that lead to prison sentences, the FairWarning review showed, involved at least one additional illegal act. Those included drinking, drug-taking or the use of a handheld phone while driving a commercial truck, a practice outlawed by federal transportation authorities.

In one case, manslaughter and other charges are pending against Jack Dillon Young, 21, who was texting and on prescription drugs last March 29 when he drove his pickup truck across the center line of a rural road in South Texas and smashed into a church bus, killing 13 people. He has pleaded not guilty.

Perhaps the stiffest sentence in recent years was given to Frank Rychtik. The Wisconsin dump truck driver pleaded no contest to killing Minnesota motorist Jason Songer, 29, and seriously injuring two others in 2014. He is serving 16 years in prison.

Rychtik had been drinking the previous evening and his blood alcohol level remained above 0.04 when he slammed into several vehicles that had stopped ahead of him on Interstate 90 near La Crosse, Wis. At the time, he acknowledged, he was looking down at a Facebook post and did not notice the stoppage.

"Life can change in that second it takes you to look at your phone," he said in a television interview last year.

In New Jersey in 2013, a high school sports star, Sam Oltmans, received a five-year prison sentence in connection with a crash that killed a 61-year-old political activist named Lauren O'Neil.

Authorities said Oltmans, who was 17 at the time of the crash, crossed a double yellow line and struck O'Neill's vehicle head-on while he was talking on his cellphone and sending text messages.

In sentencing Oltmans, according to local news reports, Superior Court Judge Robert Reed indicated that he hoped the tough penalty would serve as a warning to others tempted to text while behind the wheel.

"For God's sake, stop it, lest you stand where Sam Oltmans stands today," the judge said in remarks directed toward young people.

Today, Oltmans is out of prison and is attending Rutgers University, where he plays on the lacrosse team.

He also speaks to school groups about drinking, texting and driving.

"My message to you: Be responsible," he was quoted as telling students at Quinnipiac College.

"Don't make the same mistakes that I did. They'll stay with you for the rest of your life."

More typical of the cases reviewed by FairWarning is the one against Drew Fleming of Hudson, Wis. Authorities said Fleming was texting while driving through an eastern Minnesota highway intersection in February 2016 when he lost control of his Saab, drove off an embankment and slammed into Megan Goeltz's Ford Fusion. Goeltz, who was 22, pregnant and the mother of a toddler, was killed.

But Fleming, then 20, was charged only with misdemeanor reckless driving. Still awaiting trial, he faces a maximum sentence of a year in jail.

Forty-three states and Washington, D.C., ban text messaging by all drivers, and 15 states and the District of Columbia bar all handheld use of phones. But, by and large, punishment is light.

Florida is one of four states where drivers can't be stopped for texting while they're on the road; they can be penalized only if they are stopped for another offense, according to the National Conference of State Legislatures. Even when they're caught, the penalty is only $30 for a first offense. Legislation is pending, however, that would enable police to ticket drivers for texting even if they did not commit another offense.

Legislators in South Carolina are currently considering a bill that would increase the texting-while-driving penalty from $25 per offense to $100 for the first offense and $300 plus two points on the texter's license for every subsequent incident; critics say that's still not enough.

In Minnesota, where Megan Goeltz was killed, drivers caught texting face a $50 fine and $225 for subsequent offenses. When deaths or seriously injuries occur, a distracted driver faces at most a gross misdemeanor reckless driving charge unless engaged in an additional offense such as drunken driving.

That outrages the victim's father, Tom Goeltz, who has worked for three decades as a safety consultant in Minneapolis.

"When they say, 'Well, he has to be doing something else like speeding, or being drunk or high on illegal drugs,' I mean those things by themselves they can get a felony charge for," Goeltz said in an interview.

"You can get a felony charge for cutting down a darn tree on public land. We're not protecting the public."

In his job with a risk management firm, Goeltz discusses safety with business owners and employees, and he has added the topic of distracted driving to his lectures.

"I work with nuclear power plants and linemen that put up high tension wires with big utilities, and gas line employees," Goeltz said. "And the first thing I tell them if I'm in a safety meeting is the most hazardous thing you're going to do today is not at work, it's driving back and forth to work."