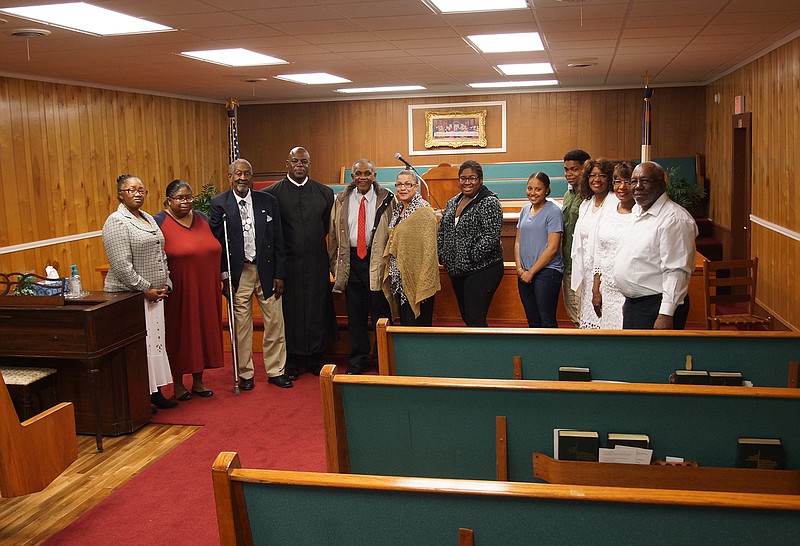 Lodi sits atop the Cass and Marion county line southwest of Atlanta. The town has a countryside of rolling hills with only homes and no commercial buildings. Today, the railroad tracks passing through seem almost the center of things.

But, if you will pay attention, an interesting point is that Lodi's community of only 200 residents has four churches. Two are right across the street from each other. The third is just down the road and a fourth is around the corner some distance away.

The denominations are two Methodist, one Baptist and one Church of the Living God. Two of the buildings are new in appearance, one is fairly modern, and the other is a traditional country church but widely expanded. All four have services.

It's almost as if Lodi were a four-corner village with a church on each corner.

No explanation is readily apparent. Lodi used to be a bustling community with three general stores, but now it has mostly churches. One, Watts Chapel CME Methodist, was pastored for many years by a distinguished medical doctor in Dr. William Watts., a physician who deserves to be widely known in both Cass and Marion counties. A story on Dr. Watts will come next week in Cass County Life.

Recently, Volunteer Christian Builders came to Watt's Chapel. Seven RVs rolled in for a week to do improvement work at the church. The church needed only to feed them two meals a day and a make a donation at the end. The builders worked on the ceiling and made a suggestion that worked well for the Methodist congregation. Let church member Flem Lockett tell it.

"The Christian Builders were a lot of fun. At one point, we asked if they knew where any pews might be located, and they said yes, they knew of a church that had some to donate and we ended up with them. Very nice," Lockett said.

Lockett also noticed another good thing about the builders.

"They'd work for a while and then go back outside and have a service, usually two times a day. Sometimes we'd join them," he said.

Watts Chapel was formerly known as Mount Pilgrim Methodist and dates back more than 100 years. At some point, a difference of opinion emerged and Ebenezer Methodist Church was founded. That's the one near the Church of the Living God Temple No. 79 at the center of town.

Only three buildings are at the town's center now. An old white frame school building had been the Ebenezer Methodist Church as well. Now, Ebenezer has a new brick building and the old school/church is a like a museum.

Right across the street, a 100 yards away, is equally new Church of the Living God building. The Damascus Baptist Church is more toward the edge of town and is struggling a bit. It has meetings only on the second Sunday of each month.

Mary Lockett of Watts Chapel said sometimes the two Methodist churches have meetings together and when they do, "It's always a good time." The Watts Chapel Methodist Church, visited by Cass County Life recently, has a formal church service with robed pastor Alton Hawkins and a printed program. The congregation is provided an outline of printed prayers and words of assurance, which are spoken. The town has just one cemetery, and this is the historic Whitaker Cemetery that is marked with a state's historical marking.

Lodi has a pleasant history and many memories for those who live here. At one time, baseball would be played on Saturdays and Sundays with teams and crowds coming from all over, Flem Lockett recalls.

"No place to park and the noise would be so loud you could hear the game in the village. The teams coming from as far away as Louisiana even had uniforms and sponsors," he said. Home runs were made by knocking the ball into the woods. Flem said he tried but never managed to do that. The community was supported those days in large measure by the Lodi Drilling and Service Oil Co., which lasted many years.

The three general stores sold almost the same things. Two brothers, Bill and Curtis McGriffin, owned one each and a McCallison the other.

Lodi is, of course, close to Jefferson and gets its mail from Jefferson and Marion County. But Cass County likes to claim it, and Mary Lockett agrees.

One other interesting building in downtown Lodi is the decayed old Masonic Lodge, which is leaning over and about to fall down near the center of town. Somehow the building, which seems to have been two stories high, indicates that at one time it was popular and busy with community support. Today it doesn't even have a story to tell. No one remembers much. Not even why it was abandoned.

But Lodi and its Watts Chapel CME Church have a distinguished past. Cass County Life will tell the story of how and why this church got its new name in next week's issue.