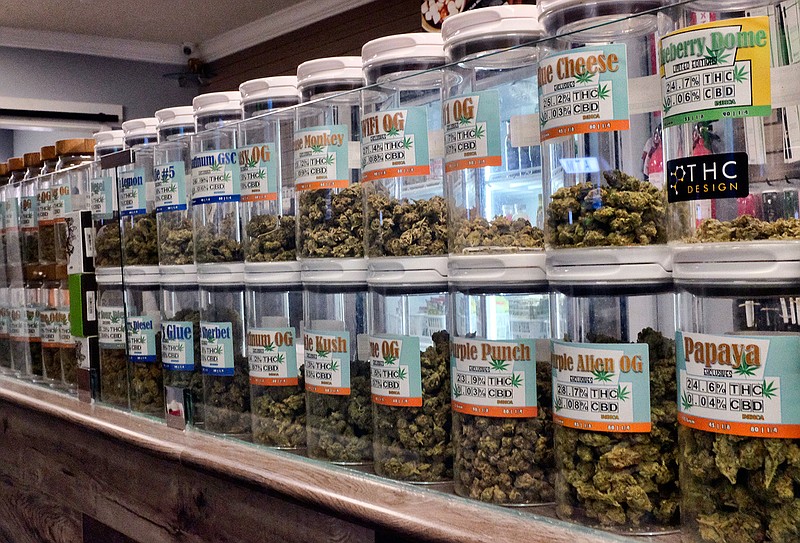 This Friday, Nov. 3, 2017 photo shows jars of medical marijuana on display on the counter of Western Caregivers Medical marijuana dispensary in Los Angeles. When U.S. Attorney General Jeff Sessions green-lighted federal prosecutors to pursue violators of federal marijuana laws, not only states that legalized recreational pot are at risk of a crackdown, but so is most of the rest of America. All but four states allow some form of medical marijuana, even Sessions' home state of Alabama.

LITTLE ROCK-The Arkansas judge who put the brakes on the state's medical marijuana program didn't do so because of an objection to legalizing pot's use for certain patients. In fact, he was downright apologetic about putting the program on hold because of objections to the licensing process.

"Amendment 98 to the Constitution of Arkansas, an initiative by the people, exists because Arkansans want to provide medical marijuana to persons who suffer from chronic, debilitating, and life-threatening health challenges," Pulaski County Circuit Judge Wendell Griffen wrote in his order last week. "The prospect that Arkansans must now endure more delay before gaining much needed access to locally grown medical marijuana should be unpleasant to anyone concerned about providing relief to people who suffer from serious illnesses."

Griffen last week declared the state's decision to issue its first licenses to grow medical marijuana, and the ranking of 95 applicants for the cultivation permits, null and void after ruling the licensing process violated the 2016 voter-approved amendment legalizing medical marijuana. The decision, which the state is appealing to the Arkansas Supreme Court, has left in limbo what was going to be the first medical marijuana program in the Bible Belt.

Griffen sided with an unsuccessful applicant who had argued the five-member Medical Marijuana Commission's process for evaluating and awarding licenses was flawed. The judge said the process was compromised by two potential conflicts of interest by commissioners, and that the state failed to evaluate whether proposed cultivation facilities were the required 3,000 feet away from schools, churches and daycare centers.

"To put it bluntly, the Medical Marijuana Commission and Alcoholic Beverage Control Division have proceeded in a manner that defies due process and the rule of law, rather in a manner that respects it," he wrote.

Some medical marijuana advocates say they hope the state will reverse course and change the licensing process on its own. David Couch, the attorney who spearheaded the 2016 medical marijuana amendment campaign, said he thinks hiring an outside evaluator to score the applications would be the best route. Couch is also an owner of one of the unsuccessful applicants for a license.

"First, we need to get medicine to the patients as soon as possible and second of all, since this is a new industry, it's kind of on the edge," Couch said. "The public needs to be certain as you can be that the process in awarding the processes was open and fair and transparent."

Naturalis Health LLC, the unsuccessful applicant that sued over the licensing process, and a state lawmaker have also made similar requests for an outside look at the applications.

The idea of starting from scratch like that isn't appealing to the five companies that the commission had intended to license for cultivation facilities. The firms had scored the highest in applications and were poised to be formally licensed before Griffen issued a temporary restraining order earlier this month.

"If the Court's ruling stands, the MMC will have to hire dozens, perhaps hundreds, of people to investigate every assertion made under oath on every application," said former Attorney General Dustin McDaniel, a part owner of Natural State Wellness Enterprises, which was in line to receive one of the licenses and which has asked to intervene in the lawsuit over the licensing process. "That would have a severe budget impact on many agencies beyond just the MMC, and is simply not required by the rules or the Constitution."

The battle over the cultivation licenses has also created uncertainty over the process for the 32 permits the state will award to operate as dispensaries selling medical marijuana. A spokesman has said the state is reviewing Griffen's order to determine any potential impact it will have on the commission's evaluation of the 227 dispensary applications that have been submitted.

Gov. Asa Hutchinson for now is leaving it up to the commission to decide on what the next steps should be until the case is settled.

"Given the number of parties involved in the case at this point, the decision of Judge Griffen is likely to be appealed and the state has few options until there is finality there," Hutchinson said.

Andrew DeMillo has covered Arkansas government and politics for The Associated Press since 2005.