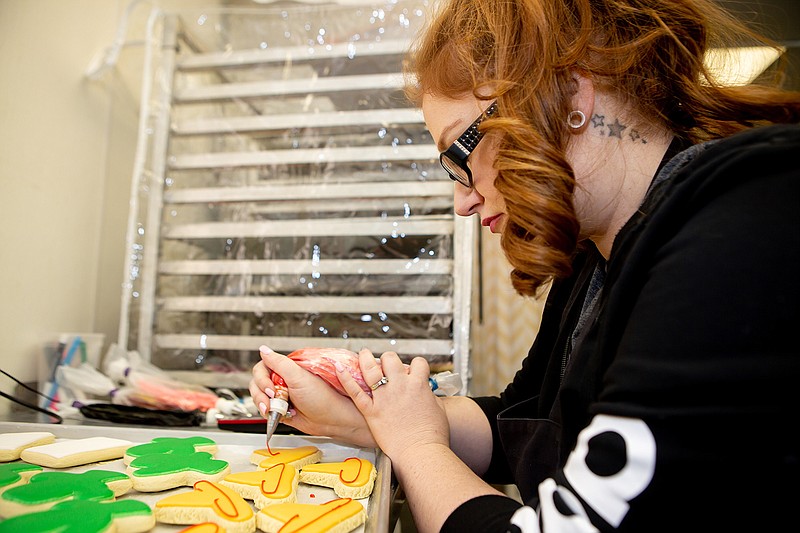 Emily Graham decorates cookies Friday at her bakery, Graham Slam Bakery, in downtown Texarkana, Ark. Graham opened the bakery at what used to be the kitchen of Flour Child and specializes in creative pastries and baking goods.

Winning a baking contest on "Good Morning America"  is an excellent way to publicly kick off your debut as a professional baker. And that's just how Emily Graham, owner of Graham Slam Bakery did it, coming out on top in December 2017 on national television.

"I've been baking ever since I was a little girl, baking with my grandmother," she said. "Also, my first attempts at anything like a restaurant was pricing the groceries and making menus with what my mother brought home from the store."

Graham's desire for those activities are a deep part of her, but for most of her life, she was a stay-at-home mom. Even then, she was creating baked goods and, in many cases, selling them. They tended to sell quickly.

"You've got to expand, my mom told me. She's my biggest fan," she said. So encouraged by her family and friends, she did, recently moving into the downtown kitchen formerly owned by Flour Child.

Response has been rapid since she opened for business, and she since has been working on the next moves.

For example, she has begun cookie decorating classes that have proven immensely popular. Students spend an hour or hour and a half learning the techniques of decorating.

"If interested in this class, be sure to sign in early, because spaces go quickly," she said. "Our cookie classes are for all ages. We also do birthday parties here."

Graham Slam is growing quickly, so the bakery is looking for a couple of new crew members to augment its staff.