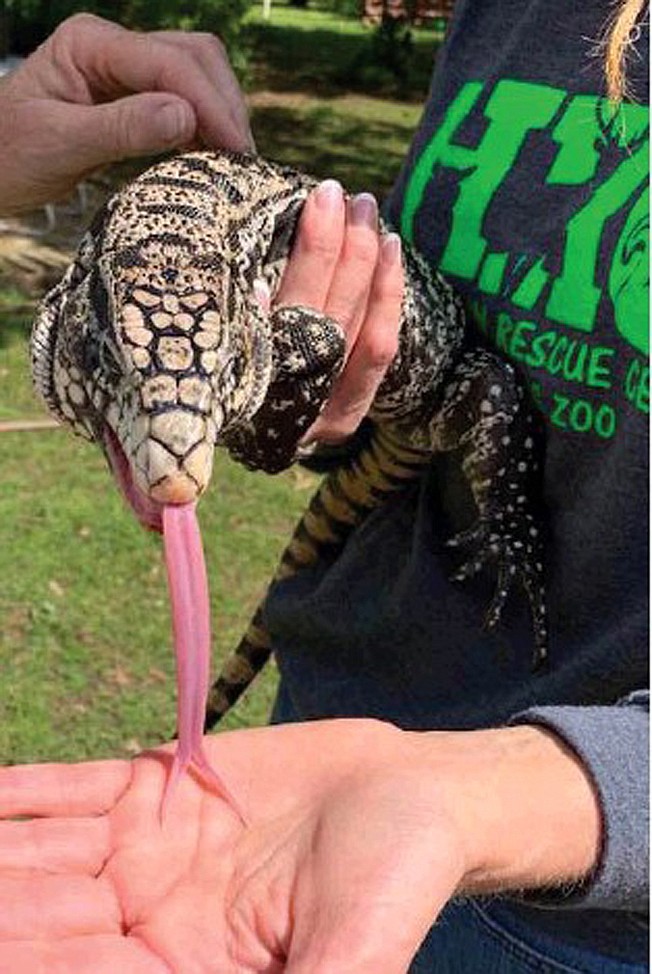 Tammy Virgin with Hochatown Wildlife Rescue shows off Tina the Tegu lizard to a visitor. Tina is one of about 30 animals at the rescue that were taken during a Miller County animal neglect investigation in April.

The lizards, snakes and other exotic animals rescued from a large Miller County, Ark., neglect case appear to be thriving in their new home in Southeast Oklahoma.

"They are putting on weight. They lay around and eat and get petted," said Tammy Virgin, director of Hochatown Petting Zoo and Wildlife Center in Hochatown, Okla.

About 30 animals-including a Tegu lizard, a Savannah monitor lizard, pythons and corn snakes-have been cared for at the wildlife center since they were taken from a Miller County residence on April 9.

Last week, the suspect in the case plead guilty to several counts of misdemeanor animal abuse and gave up ownership of the animals.

One snake, which is more aggressive than the others, is now with a Paris, Texas, man who works at a pet store and has knowledge of snakes. But the other reptiles have found a forever home in Hochatown.

"They will stay here at the wildlife rescue," Virgin said.

Volunteers in Hochatown rehabilitate animals found in the wild injured or abandoned. The petting zoo, which includes miniature horses and other tame animals, helps fund the rescue.

Typical wildlife cared for at the wildlife center include deer or possum-not Tegu lizards. But when Virgin learned of the neglect case, she wanted to help even though it was overwhelming.

"I have never had a rescue this large before. The first night I was very overwhelmed. The snakes were angry and I don't blame them," Virgin said.

Other animals involved in the case have been cared for locally.

The lizards and snakes have been challenging to care for. The snakes had mites and Tina the Tegu suffered from mouth rot, which can be very serious to reptiles.

An exotic animal veterinarian near Fort Smith, Ark., has treated Tina and it has improved, Virgin said.

Tegus are social animals and Tina loves attention from the groups of children who visit the rescue.

"She's a real sweetie with the school groups," Virgin said. "The kids love her and the lizards."

Bad cases of mites kept the animals in quarantine for their first few weeks in Hochatown.

The Savannah monitor had a serious case of mites but has improved and now has a great relaxed personality, Virgin said.

One of the snake is still being treated for rot on its belly. It has to be soaked in a specific bath two to three times a day for 30 minutes but should make a full recovery.

"It was bad on the belly from where it was laying in all the filth," Virgin said.

Since the animals need food and other items, expenses are adding up quick. Anyone interested in making a donation can call 580-494-7387 or check out the rescue's wish lists on Amazon. There are links to all of the wish lists through the rescue's Hochatown Petting Zoo Facebook page. One wish list is for the reptiles and includes items like heat lamps, thermometers, humidity gauges along with food and treats.