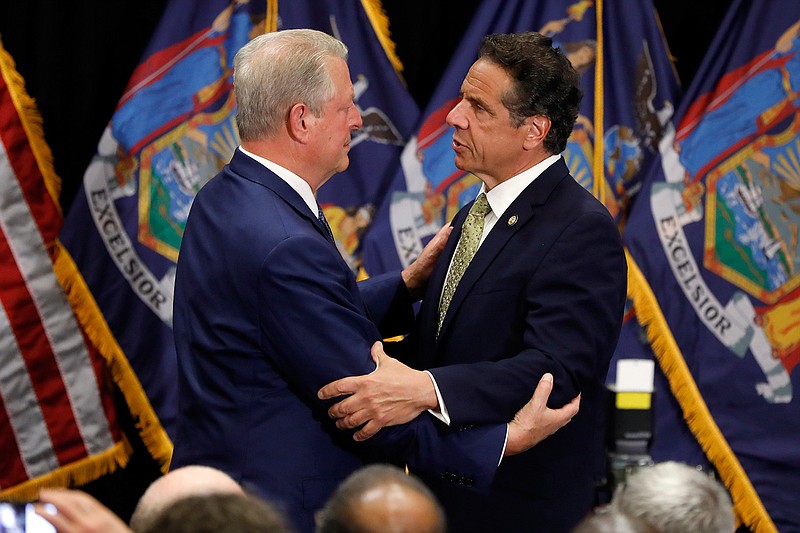 A new law signed Thursday by New York Gov. Andrew Cuomo sets the nation's most aggressive targets for reducing carbon emissions and is intended to drive dramatic changes over the next 30 years. It calls for all the state's electricity to come from renewable, carbon-free sources such as solar, wind and hydropower. Transportation and building heating systems would also run on clean electricity rather than oil and gas.

But while the goals are clear, details on how to achieve them have yet to be determined. It isn't clear how much all this change will cost, or even whether it is all technically feasible.

Some critics call the plan impractical.

"It would require massive deployment of both onshore and offshore wind, which is going to be enormously costly," said Robert Bryce, an energy specialist at the Manhattan Institute, a conservative think tank. "You already have local opposition to onshore wind that has stymied the state's ability to build any new capacity."

The Climate Leadership and Community Protection Act requires the state to cut greenhouse gas emissions to 85% below 1990 levels by 2050 and offset the remaining 15% with measures such as planting forests and capturing carbon for storage underground.

A new 22-member New York State Climate Action Council will have three years to come up with a "scoping plan" to recommend mandates, regulations, incentives and other measures.

The law will require utilities to get 70% of the state's electricity from renewable sources by 2030. Last year, 26.4% came from renewables, according to a report by New York Independent System Operator, the nonprofit corporation that runs the state's power grid.

"The legislation is going to shape the way we live, work and play going forward," said Peter Iwanowicz, executive director of Environmental Advocates of New York, which supports the plan. "It transitions New York state's economy entirely off fossil fuels to one powered by renewable energy."

Massive wind farms will play a key role in the transition.

Cuomo announced Norway-based Equinor will develop one farm, generating power for New York City, while a joint venture of Connecticut-based Eversource Energy and Orsted A/S, a Danish company, will develop another, off the coast of Long island.

Combined, the two farms will have a 1,700-megawatt capacity, enough to power 1 million homes, Cuomo said at the signing, where he was joined by former Vice President Al Gore.

"This is the most ambitious, the most well-crafted legislation in the country," Gore said.

The Climate Action Council will likely call for new building codes to increase energy efficiency and require heating and cooling systems using electric heat pumps that transfer heat between indoors and outdoors. There may be incentives to retrofit existing homes and buildings. The New York City Council this spring passed an aggressive climate bill of its own that would require energy-efficient building retrofits, with hefty fines for landlords who don't comply.

Since transportation makes up a third of the state's emissions, the climate council will likely push for greater mass transit and an accelerated shift to electric vehicles, which the state now promotes with rebates and investments in charging infrastructure.

Ken Girardin, a policy analyst at the Empire Center for Public Policy, a spinoff of the Manhattan Institute, calculates the offshore wind buildout will cost more than $48 billion upfront and $1 billion in annual operating cost. At least 56 square miles (145 square kilometers) of solar panels would be needed to hit the 2025 goal of 6,000 megawatts of solar capacity, Girardin said.

About a third less land area would be required with today's technology, he said, but the buildout would still be staggering-especially in a state where land is expensive and local opposition has stymied such projects.

New transmission lines, which also generate local opposition, would be needed to tie new wind and solar projects to the electrical grid.

"It's definitely going to cost ratepayers a lot more for reliable electricity," said Gavin Donohue, president of Independent Power Producers of New York, whose members produce three-quarters of the state's electricity. He said efficient, low-emission natural gas plants built in the last 10 years are needed to keep the lights on.

Other Democratic-led states have passed laws to reduce greenhouse gas emissions in response to the Trump administration's efforts to roll back regulations on power plants and vehicles. New York is the sixth state to mandate 100% renewable energy sources in coming decades, after Hawaii, Nevada, New Mexico, Washington and California. But New York's plan will get there first.

"It's one of the strongest climate change laws in the world," said Michael Gerrard, director of the Sabin Center for Climate Change Law at Columbia University. "It's a heavy lift, but not as difficult as coping with the effects of severe climate change if action is not taken."