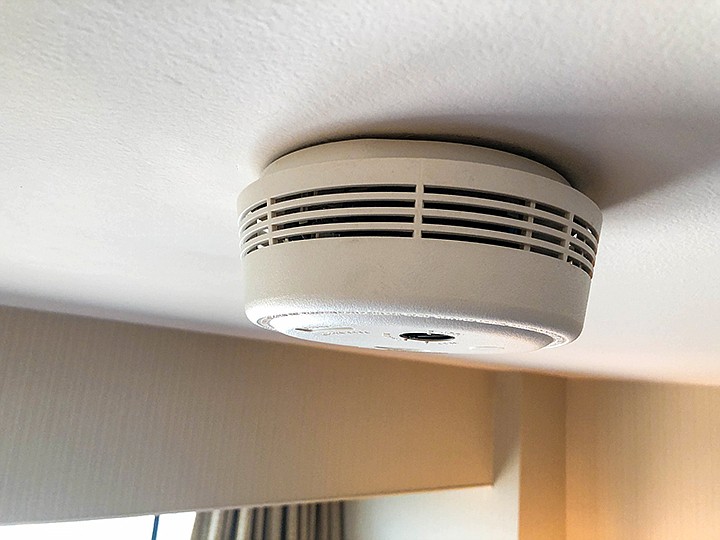 Smoke alarms are an important part of fire safety in the home. Metro Creative Graphics

In the wake of a young child's death in a Texas-side house fire, professionals are reminding the public how to help prevent similar tragedies.

A 22-month-old boy died in a fire Wednesday morning in the 3000 block of Meadows Drive, despite a Texarkana, Texas, Fire Department crew arriving on the scene only three minutes after it received the 911 call. An adult and five other children escaped the house unharmed.

It is difficult to know exactly what happened, but the fire started where an electric fan was plugged in, in a room where the boy was sleeping in a crib, TTFD Assistant Chief and Fire Marshal Chris Black said Friday.

"One thing we aren't able to do is ensure that fire safety is being practiced in homes. We teach our children, we enforce fire safety at local businesses, but it's up to homeowners and parents to ensure their families are protected," stated a Facebook post from the TTFD firefighters' union local.

The union shared a post written by its vice president, Capt. Scott Daniel, who also urged people to recognize fire risks and take responsibility for safety. Daniel's post was on a personal account not officially representing TTFD or the union. He was among the firefighters who responded to the fatal blaze Wednesday.

"The odds of you or your child dying in a house fire are NOT 1 in a million, the odds are much, much lower. Don't take that chance, ever," stated Daniel, a 20-year veteran of the fire service. "DON'T COUNT ON THE FIRE DEPARTMENT TO SAVE YOUR FAMILY!! We may not get there in time."

"DO NOT GO TO SLEEP TONIGHT WITHOUT A WORKING SMOKE DETECTOR IN EVERY BEDROOM AND THE KITCHEN!!" Daniel posted, saying that the devices cost as little as $5 each and volunteering to install them for anyone who needed him to.

It's important to test smoke detectors regularly and ensure everyone in the home knows what they sound like and what to do when they go off, Black said.

Families should have escape plans in place that include two ways out of every room, and they should practice escape drills regularly. As awkward as it may seem, it is important to go over fire safety plans with temporary house guests, as well, Black said.

Having at least one ABC-type fire extinguisher in the home is also recommended.

"It is ok to be the bad guy when your child's life is on the line. This is much easier than being the parent of a dead kid," he wrote.

Both Daniel and Black recommended closing bedroom doors at night and any inside doors if a fire is burning. Closed doors can slow down the spread of fire long enough to allow people to escape.

Because of the many plastics and other synthetic materials modern homes and furnishings are now made of-materials firefighters refer to as "solid gasoline"-house fires are much hotter, faster and more toxic than they were 30 years ago, Black said. There is very little time to escape.

"You only have 3 to 4 minutes to get out of a house fire before you DIE. Once a fire starts burning in an open area in your house, the house will collapse in less than 20 minutes. During that 20 minutes, the smoke and fire conditions in your house are intolerable," Daniel stated.

"In fact, my advice is to throw away any of the cheap, flimsy cords you have now. They are killers," Daniel posted.

Check all power cords and plugs for damage, and do not use any with exposed wire.

Modern electrical safety equipment such as breaker switches can be so sensitive that homeowners disable them, Peavy said, while older homes have equipment that is less effective. Amateur electrical work can also cause hazards.

"You can pick up a book, you can watch YouTube, and you can make a light come on, but just because the light came on does not mean that it's done correctly," Peavy said.

Heat generation is always a concern where there is electrical power, even in LED light fixtures.

"You can make anything red hot with just a couple of little wires," Peavy said.

Covers should be kept on light switches and electrical outlets, he said, and there are three emergency warning signs that should prompt an immediate call to an electrician or the fire department: a sizzling sound, visible smoke or a burning smell from where there is wiring.

Daniel ended his post with a warning and an offer.

"Fire safety is very serious. It will mean the difference between life and death," he wrote. "If you have any questions or concerns, get in touch with me. I will come to your house and assist your family with fire safety. I do not want to see another person killed in a fire."

Call a qualified electrician or your landlord if you have: