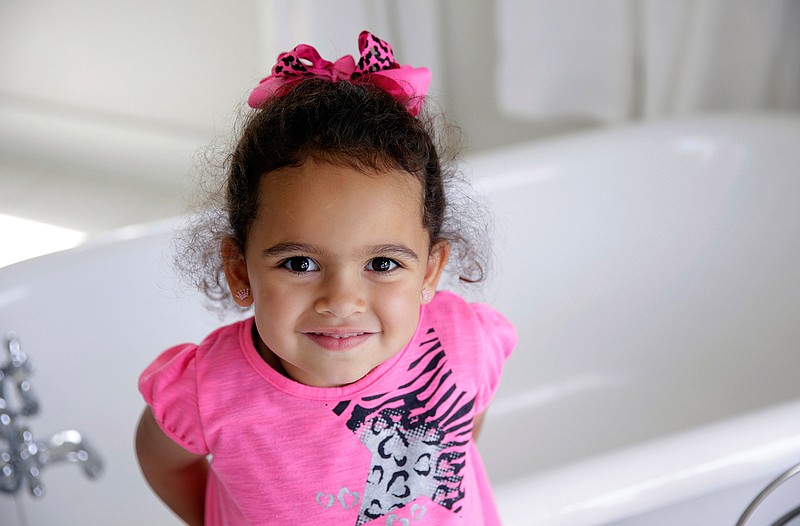 In this Aug. 6, 2013, file photo, Veronica, 3, a child at the center of an international adoption dispute at the time, smiles in a bathroom of the Cherokee Nation Jack Brown Center in Tahlequah, Okla. A federal law that gives preference to Native American families in child welfare proceedings involving Native children is facing a significant legal challenge. In 2013, the U.S. Supreme Court ruled the law didn't apply in a South Carolina case involving Veronica because her Cherokee father was absent from part of her life. (Mike Simons/Tulsa World via AP, File)

FLAGSTAFF, Ariz.-A federal law that gives preference to Native American families in foster care and adoption proceedings involving Native American children is facing the most significant legal challenge since it was enacted more than 40 years ago.

A federal judge in Texas ruled the Indian Child Welfare Act is unconstitutional, saying it is racially motivated and violates the equal protection clause.

More than 20 states have joined hundreds of tribes, advocacy groups and the federal agency overseeing Indian affairs in urging an appellate judge to uphold the law. They say tribes are a political classification, not a racial one, and overturning the Indian Child Welfare Act would lead to untold damage in tribal communities.

"The fear is without the statute, Indian children will once again sort of disappear into the child welfare system and be lost to their families and their tribes," said Adam Charnes, who will present arguments on behalf of five intervening tribes before a panel of the 5th U.S. Circuit Court of Appeals on Wednesday.

The law has led to some emotional, high-profile cases, including one in 2016 in which a court ordered that a young Choctaw girl named Lexi be removed from a California foster family and placed with her father's extended family in Utah. Images of the girl being carried away from her foster home drew widespread attention.

In 2013, the U.S. Supreme Court ruled the law didn't apply in a South Carolina case involving a young girl named Veronica because her Cherokee father was absent from part of her life.

Congress passed the Indian Child Welfare Act in 1978 because a high number of Native American children were being removed from their homes by public and private agencies. In adoptions of such children, the law requires states to notify tribes and seek placement with the child's extended family, members of the child's tribe or other Native American families. Tribes also have a say in foster care placements.

The law allows states to deviate from placement preferences when there is "good cause." The U.S. Bureau of Indian Affairs sought to clarify the term in 2016 by saying state courts shouldn't consider socio-economic status, or ordinary bonding or attachment to host families, among other things.

The latest case centers on Chad and Jennifer Brackeen, a Texas couple who fostered a baby eligible for membership in both the Navajo and Cherokee tribes.

The boy's parents voluntarily terminated their parental rights, and the Brackeens petitioned to adopt him.

The state denied their request after the Navajo Nation identified a potential home with a Navajo family in New Mexico. The Brackeens got an emergency stay and went to court. They were able to adopt the boy in January 2018 after the placement fell through.

"It coerces state agencies and courts to carry out unconstitutional and illegal federal policy, and it makes child custody decisions based on racial preferences," Texas Attorney General Ken Paxton has said.

Matthew McGill represents the Brackeens, two other couples from Nevada and Minnesota, and a birth mother in the case. He said the Indian Child Welfare Act may have been well-intentioned, but it illegally segregates Native American children by race and has upended his clients' lives.

"Fundamentally, the issue here is that the Indian Child Welfare Act subordinates individualized considerations of a child's best interest in favor of a blunt assumption that being placed with a tribe is going to be better for the tribe, and that's just demonstrably untrue," he said. "It's not going to be true in every case."

The Minnesota couple, the Cliffords, wanted to adopt a girl who lived with them after being in various foster homes for two years. The child ultimately was placed with her maternal grandmother, a member of the White Earth Band of Ojibwe. The tribe at first said she wasn't eligible for membership but later reversed course.

The Librettis in Nevada arranged with a pregnant woman, Altagracia Hernandez, to adopt her unborn child. Hernandez isn't Native American, but the biological father is from Ysleta del Sur Pueblo in El Paso, Texas.

The tribe intervened and has identified three dozen possible placements. Hernandez is a plaintiff in the case.

Tribes and tribal advocates say Native American children are still separated from their families at rates higher than the general population, and the law helps them stay connected to their tribes, relatives and culture.

The Indian Child Welfare Act defines Indian children as enrollees or potential enrollees who have a biological parent who is a member of any of the country's 573 federally recognized tribes. About a dozen states have similar laws, some of which expand the definition, said Sarah Kastelic, director of the National Indian Child Welfare Association.

When the federal law was enacted, studies showed up to one-third of Native American children were being taken from their homes by private and state agencies, including church-run programs, and placed with mostly white families or in boarding schools. Testimony in Congress showed that was due to ignorance of tribes' values and social norms. Kastelic also said there was a misconception that Native American families were unfit or too poor to care for their children.

"It was important to halt that removal, to correct state behavior, to put in minimum standards," she said.

Many Native American families have stories about loved ones who disappeared and never returned.

Allie Greenleaf Maldonado said her grandmother and uncles were placed in boarding schools, forced to cut their hair and beaten if they practiced their religion. When the grandmother died, Maldonado's mother was sent to live in Indiana with a Mennonite family who put bleach on her skin to lighten it, told her to say she was Armenian and kept her from communicating with her family, she said.

Maldonado and her husband have an adopted son from a neighboring tribe. She said unlike her, 11-year-old Riley is growing up on the reservation and learning about traditional medicine and a culture that includes hunting and fishing.

"Only because of the Indian Child Welfare Act, (and) people following it, he has a community," she said.