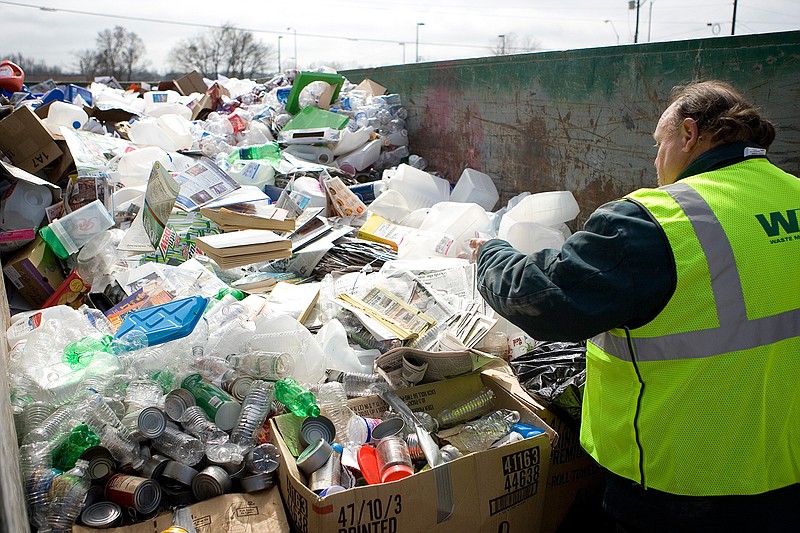 In this February 2010 file photo, Western Waste employee Wendal Hyland throws recyclable materials into a bin at Third and Hazel streets in Texarkana, Ark., on the first day of the Green Texarkana recycling program. The city said Thursday that the program is being discontinued.

The city and its partners will no longer accept recyclables on the second Saturday of each month at East Third and Hazel streets.

"The costs associated with the program are rising and we're no longer able to bear the expense," a news release stated.

The city's Recycling Center is not affected and is open during the week.

Green Texarkana began with a pilot program in February 2010 and since has collected tons of recyclable materials, according to previous Gazette reports. The program was the basis of the city's permanent recycling effort, which began in August 2014 with the construction of the Recycling Center at 2601 Dudley St.

The city encourages residents to bring recyclables to the Recycling Center, open Monday through Friday from 7 a.m. until 3:30 p.m.

Materials accepted for recycling include the following items only.

Other items will not be accepted. Items not accepted include, but are not limited to, food containers, glass, plastic bags, electronics, ink cartridges, batteries, Styrofoam, paint, sharp metal, car parts, hazardous waste and appliances.

Items should be separated and ready to dump into bins upon arrival at the recycling center.