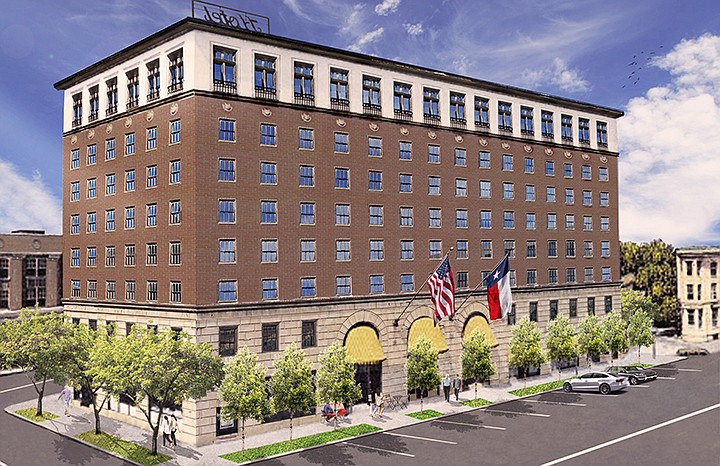 This artist's rendering shows what the Hotel Grim could look like after its $25 million rehabilitation. Illustration courtesy Cohen-Esrey Development Group

TEXARKANA, Texas - Abatement of asbestos and other dangerous materials from the Hotel Grim began Tuesday, marking the beginning of the iconic downtown building's long-anticipated rehabilitation.

Leander, Texas-based Building Abatement and Demolition Co. has "mobilized" the site - meaning needed materials and personnel are in place - and initial inspections, planning and safety training have been completed, said Tim Minson, project manager with Construction Technologies, a division of general contractor Cohen-Esrey Development Group. Removal of debris was set to begin in the building's basement as early as Tuesday afternoon.

Because the Grim is "one big milkshake," with various materials having mixed together over the years, BAD Co. will be combining abatement and demolition, removing not only hazardous materials but also other debris, Minson said. That makes a timeline for this phase of the project hard to determine.

The building has been open to the weather for decades, so rain has washed much of the material to be removed down into the basement. That means the basement is considered a fully contaminated space, requiring workers to wear complete protective gear such as respirators and hazmat suits.

Because of well-established safety protocols, there is no danger to the public, Minson said. Outer-perimeter security fencing is to keep people away from the site. An inner perimeter will consist of plastic sheeting covering every opening from which air could escape the workspace. Ten pallets of plastic have been delivered to the site for that purpose. A series of various filters will clean air before it is vented outside.

Inspectors from Cohen-Esrey, BAD Co., and the city will join third-party consultants to supervise the process and ensure all safety regulations are observed. All involved are very experienced and capable, Minson said.

"They do this every day," he said.

Any dangerous materials removed will be completely sealed in containers and transported to Waste Management Inc.'s landfill in New Boston, Texas, where it will be immediately buried, according to a Waste Management spokesperson.

The Grim's steel-reinforced concrete construction made its basic structure so strong that it would probably meet modern building standards, Minson said, noting that if building were more dependent on wood construction it may not have been salvageable.

Plans are to convert the building into 93 studio, one- and two-bedroom apartments. All apartment units in the Hotel Grim will be affordable-rate housing because the project is partially funded by the federal Low-Income Housing Tax Credit program. That means tenants can have a household income of no more than 60% of the local median. Rental rates have not been determined.

Cohen-Esrey has launched a website, HotelGrimApartments.com, aimed at potential future tenants of the building. It features floor plans and descriptions of the hotel's planned amenities.

Named after Texarkana banking, railroad and timber magnate William Rhoads Grim, the hotel opened in 1925. Construction cost for the luxurious 250-room hotel was nearly $1 million. It closed in 1990.