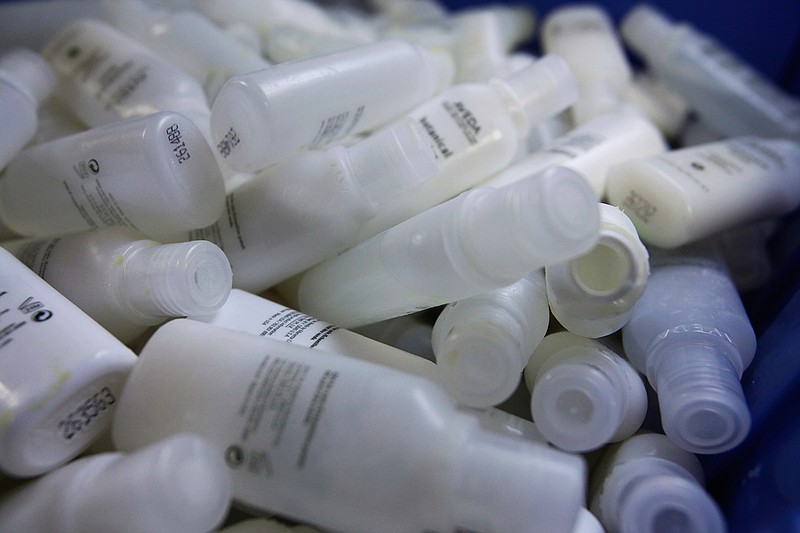 Miniature toiletry items such as these will soon be a thing of the past at InterContinental Hotels Group properties. (Frances Micklow/The Oregonian/TNS)

Like many frequent travelers, Caroline Eubanks has accumulated dozens of tiny plastic bottles filled with shampoo, conditioner, lotion and shower gel. She has so many toiletries from hotels - ranging from high-end brands to generic - she isn't sure what to do with all of them.

"When I didn't stay at hotels all the time, it was thrilling," said Eubanks, 31, an Atlanta-based travel blogger and author of "This Is My South." But for many travelers the thrill of tiny toiletries is gone. "They don't really speak to the value of the hotel anymore," Eubanks said. The hotel industry is shifting away from single-use toiletries, and travelers such as Eubanks have begun moving away from them as well.

Marriott announced in late August, the company would replace single-use shampoo, conditioner and bath gel in guest-room showers with larger pump-topped bottles in most of its 7,000 properties worldwide by December 2020. Just weeks earlier, IHG, whose brands include Holiday Inn and Crowne Plaza, had announced the move to bulk-sized amenities worldwide by 2021.

Following the lead of the city of Santa Cruz, the California State Assembly voted this spring to replace the small plastic bottles in hotels with dispensers or plastic bottles larger than 12 ounces. If approved by the governor, the bill would go into effect in 2023.The shift from single-use toiletries to bulk-size dispensers allows hotels to make a gesture of environmental goodwill - reducing waste by eliminating 200 million to 500 million mini plastic bathroom containers each year depending on the chain - while also lowering their costs over time. Industry analysts predict bulk amenities, already widely used internationally, will also become the standard for American hotels.

"We expect it to be cost neutral. We are not doing it for the cost aspect," said Denise Naguib, vice president of sustainability and supply diversity for Marriott. "Plastic is plastic but one important element to understand is the tiny bottles are not recyclable in most scenarios. The larger bottles are highly recyclable."

But not everyone is on board.

Some travelers have expressed concerns that bulk products could be contaminated, intentionally or accidentally, or that hotels would try to cut costs by filling dispensers with generics instead of high-end products. Some were concerned that dispensers would not be repaired or filled in a timely manner.

Millennials, at least, seem to be particularly accepting of the changing trend.

"Friends in the travel community are trying to get rid of their plastic wherever possible," Eubanks said. "Millennials are seeing the effects of damage to the environment firsthand. Maybe it is more important to this generation."

Still, old habits can take time to break. Packaged toiletries - soap, shampoo, conditioner and lotion - have some of the highest usage rates among hotel amenities, according to recent research led by Chekitan Dev, professor at the Cornell University School of Hotel Management. Also, single-use products may cost more per ounce than bulk dispensers. But bulk amenities come with costs as well - installing, cleaning and repairing damaged dispensers can add up, said Dev. Housekeeping carts have to be retrofitted, and staff will need training.

About 86% of hotel guests use the tiny single-use toiletries compared to only 24% that use soap or shampoo in dispensers, based on data from 33 U.S. hotels operated by a major global hotel company that features more than 50 amenities on its properties. Dev said the difference is most likely because guests are accustomed to using tiny toiletries. "I expect this 'inertia' will go away when hotels transition to dispensers," he said. In the meantime, he said, some hotels may hedge, offering the tiny bottles to guests upon request until behavior changes.

In 2018, Marriott - whose brands include Ritz-Carlton, W and Sheraton among others - tested bulk amenities in 1,000 hotels to positive feedback from guests. Adding all properties will bring a significantly larger environmental impact, said Naguib, leading to a 30% reduction in plastic use. Most of the brands are working to shift their amenities to bulk size using dispensers in wall-mounted shelves or brackets, all of which will be tamper-proof.

Other hotel brands are reducing toiletry waste in different ways.

Hilton sends partially used bars of soap from its brands - which include Canopy, Hampton and Doubletree - to Clean the World, an organization that recycles the soap and sends it to children and families in countries with high death rates from hygiene related illnesses.

While the big hotel chains have grabbed the headlines, many boutique hotels were the early adopters of the trend.

When the famed Hotel Clermont in Poncey-Highland reopened as a boutique destination last year, it was always assumed the proprietary La Bottega toiletries would be presented in large containers. "It felt like the natural thing to do. It just seemed so ridiculous to have these little toiletries," said general manager Alan Rae. The hotel's well-traveled owners knew the trend was already the standard in other countries and following it matched guest preferences.

"We find more people not wanting their rooms serviced or beds changed and they are refusing towels," Rae said, noting that sustainability is key to the very existence of the revamped hotel. "We do not just have a sustainable ecosystem that we are operating but we saved a building and that gets into the social and cultural impact on humans. People want to be attached to things that are original and old."

And some of them also want to be eco-friendly.

There is, of course, another option any individual traveler can employ, said Eubanks. "If you are concerned about it, you can always take your own," she said.