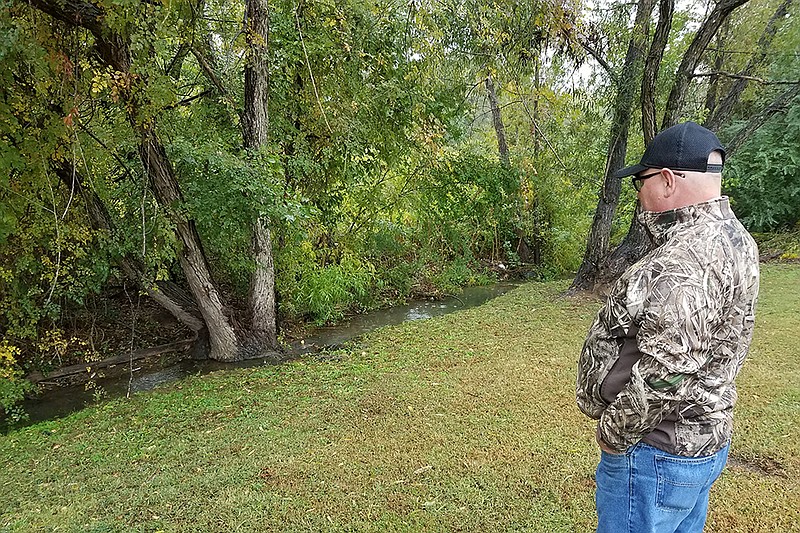 On Oct. 25, 2019, Texarkana, Arkansas, Animal Services Director Charles Lokey examines where feral hogs entered a backyard in the 6100 block of Timbercreek Drive. Hogs that live in wooded areas within the city limits regularly cause problems for residents by approaching homes to find an easy meal.

TEXARKANA, Ark. - Encounters between feral hogs and city residents are a continual concern that animal control officers are addressing by capturing and killing as many of the dangerous, destructive animals as they can.

Especially on the edges of the city, where backyards often end where heavily wooded areas begin, hogs in constant search of food find landscaped yards and full garbage cans irresistible, Animal Services Director Charles Lokey said. They thrive in forests where there are plenty of acorns, pecans and persimmons to eat, but it never seems enough for the voracious omnivores.

"They eat everything," including each other and the occasional cat or small dog, Lokey said.

Though rain had washed away much of the evidence, signs of hogs' rooting were visible on Friday in a backyard in the 6100 block of Timbercreek Drive, part of a suburban subdivision filled with well-kept modern homes and manicured lawns. Thick woods border the neighborhood, and they are full of the wild pigs that proliferate across both Arkansas and Texas, Lokey said.

The problem is serious enough statewide that the General Assembly in 2017 created a Feral Hog Eradication Task Force tasked with aggressively getting rid of what it calls an invasive species, a public nuisance and a threat to Arkansas.

"They compete for food resources, destroy habitat by rooting and wallowing and will eat ground-nesting birds, eggs, fawns and young domestic livestock. They also carry up to 45 bacteria, diseases and parasites, including Trichinellosis, Brucellosis and swine herpes virus," the task force's website states.

Feral hogs have established themselves in 35 states, and their total U.S. population is estimated to be almost seven million, according to a recent article in Popular Science. According to the Department of Agriculture, they cause about $2 billion in damage in the U.S. annually.

Because feral hogs are considered "nuisance wildlife" in Arkansas, residents may kill them during daylight hours without a permit. But Texarkana ordinances prohibit any hunting in the city.

Animal control, however, may trap and shoot feral hogs within the city limits. Lokey plans to set traps soon near the intersection of Jefferson Avenue and McDonald Lane, for example, and he has a trade secret: mixing Kool-Aid drink mix with the feed he uses as bait.

"That fruit punch aroma just drives them crazy," he said.

Lokey prefers to donate the hogs' meat to families in need, but he is in search of a butcher who will volunteer to process it.

His advice to residents is to avoid contact with feral hogs if at all possible, especially with sows raising litters. To protect their offspring, mother hogs can be particularly aggressive.

"They will definitely attack you," he said.