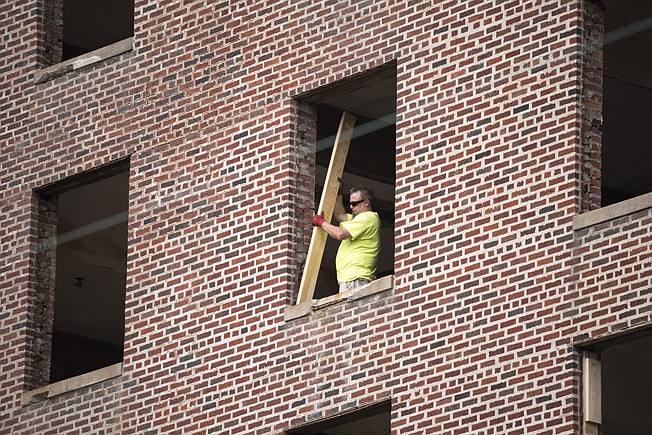 Work on the Hotel Grim continues Tuesday afternoon in downtown Texarkana despite the COVID-19 pandemic. Most of the subcontractors are able to safely distance themselves from one another, said Tim Minson, Cohen-Esrey Development Group project manager. "No one's backed down," he said. "The employees have to work to feed their families."
Gallery: CARTI Tour de Rock

TEXARKANA, Texas - Renovation work on the Hotel Grim is "moving at full speed ahead" despite the COVID-19 pandemic, the project's construction manager said Tuesday.

Up to 30 subcontractors are working in the building daily, and most are able to safely distance themselves from one another, said Tim Minson with general contractor Cohen-Esrey. Those who must work close to one another are wearing containment suits to protect them from toxic materials such as asbestos, and the suits will also keep out the new coronavirus, he said.

"No one's backed down," Minson said of the subcontractors handling different parts of the project. "The employees have to work to feed their families."

Crews are tackling various parts of the project simultaneously in a process Minson called "triage construction," meaning they are working on whatever they can whenever they can.

Demolition and toxic materials abatement are ongoing on the hotel's second and third floors, and that work is likely to continue for four to five weeks. At that point the work will accelerate, with up to 80 people working in the building at a time, Minson said.

Crews are removing the hotel's old windows and preparing the openings for three truckloads of new windows being shipped from Minnesota.

Another high priority is installing a new roof. Subcontractors from Miami will begin that work next week.

Local subcontractors have been at work installing electrical, plumbing and air conditioning conduit in the building's basement and will continue up from there once the second and third floors have been cleared. A two-ton piece of concrete must be removed from each floor to make way for the building's fire escapes.

Pressure washing the outside of the building and repairing its masonry are also underway. Custom-cut limestone blocks will replace some missing on the Pine Street side of the hotel.

Next will come framing the building's interior, the first step in converting the hotel into more than 90 apartment units.

Cohen-Esrey has launched a website, HotelGrimApartments.com, aimed at potential future tenants of the building. It features floor plans and descriptions of the hotel's planned amenities.

Named after Texarkana banking, railroad and timber magnate William Rhoads Grim, the hotel opened in 1925. Construction cost for the luxurious 250-room hotel was nearly $1 million. It closed in 1990.