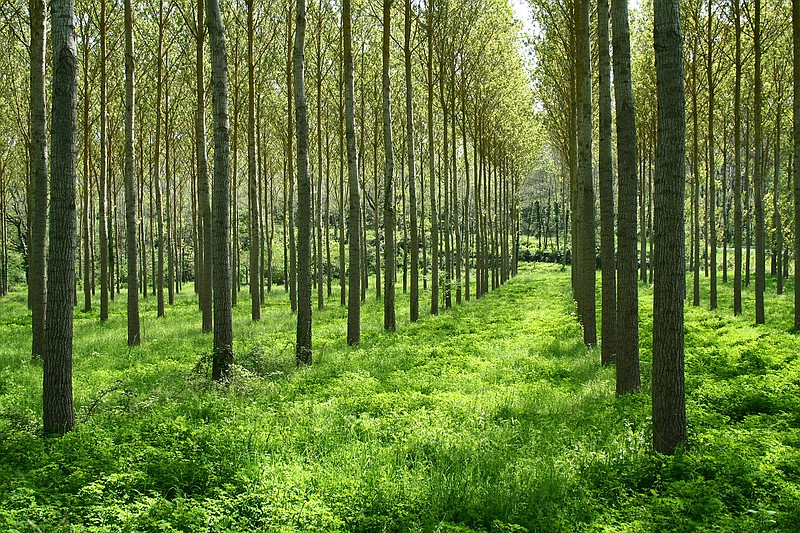 But just by living and continuing to grow, stands of poplars like these can take up about 50 gallons of toxic water a day and break it down into innocuous byproducts such as carbon dioxide and chloride. (AdobePhotostock)

An hour's drive south of San Francisco, a stand of several hundred poplars grows in a Y-shape - a rather unusual sight wedged between two baseball fields. The trees were planted in 2013 to suck carcinogens out of a 1,500-acre Superfund site contaminated by the U.S. Navy, which disposed of toxic waste generated from developing military aircraft into ponds and landfills.

The Naval Air Station at Moffett Field is one of more than 1,000 Superfund sites in the U.S., the legacy of decades of industrial pollution. Cleanup of these sites is expensive, often owing to the specialized machinery and tools needed to excavate and dredge the land. And the moving of contaminated soil to landfills or the pumping and filtering of systems used to decontaminate water can themselves be disruptive to the environment.

But just by living and continuing to grow, the poplars, in Mountain View, California, can slurp up about 50 gallons of toxic water a day and break it down into innocuous byproducts such as carbon dioxide and chloride.

The poplars are part of a wave of advances in phytoremediation, the process of using plants to clean up toxic soil or water. They arise from work by Sharon Doty, a plant microbiologist at the University of Washington, who identified the microbes that naturally colonized poplars. She then licensed those strains of microbes to Intrinsyx Environmental, which gave the poplars in Mountain View a boost to enable the trees to survive and even thrive in a toxic landscape.

Intrinsyx Environmental and Phytoremediation and Phytomining Consultants United have since applied the same method at more than 20 polluted groundwater sites across the country in Texas, Kentucky, New York and the Midwest.

The microbe-boosting method "will prove to be a very useful green biotechnology with wide application in the very near future," said Guy Lanza, an environmental biologist at the State University of New York in Syracuse who is not involved with the companies.

Phytoremediation of toxic soil and water dates back to the 1970s. As researchers with the U.S. Department of Agriculture began visiting farm plots ravaged by fertilizers, they noticed that some plants, such as soybeans, survived.

"That told us right away that plants are not just these immovable creatures," said James Landmeyer, a groundwater geochemist with the U.S. Geological Survey and author of "Introduction to Phytoremediation of Contaminated Groundwater."

Initially, researchers called these outliers "volunteer plants." In the right circumstances, Landmeyer said, "the plants can act as a vacuum cleaner to concentrate the contaminants."

Still, Landmeyer estimates that probably less than 10% of Superfund sites in the country use phytoremediation as a stand-alone cleanup method.

One reason for the limited success is that trees that were planted with good intentions could not survive in areas that were highly polluted. "People were losing faith in phytoremediation because it got expensive to replace dead or sick trees," said John Freeman, chief scientific officer at Intrinsyx. "It was viewed to be cost prohibitive."

If the trees remained healthy, phytoremediation would cost about half as much, saving perhaps $500,000 per project, compared to traditional engineering methods such as drilling and extracting toxins from soil or groundwater, Landmeyer said. Trees might take a bit longer for the same job - about five years, he estimates - "but the cleanup goal would be the same."

Before planting the poplars, Intrinsyx inoculate the poplar cuttings with high concentrations of a microbe called PDN3. This microbe not only gives the poplars an added survival advantage, but helps the trees withstand toxic groundwater by breaking down trichloroethylene, an industrial pollutant from solvents and degreasers.

The technique was developed by Doty, who in 1995, as a postdoctoral researcher, began studying whether genetically modified poplar trees could clean up pollutants. Poplars are fast-growing and have an extensive root system, which allows them to quickly take up whatever is in the soil groundwater.