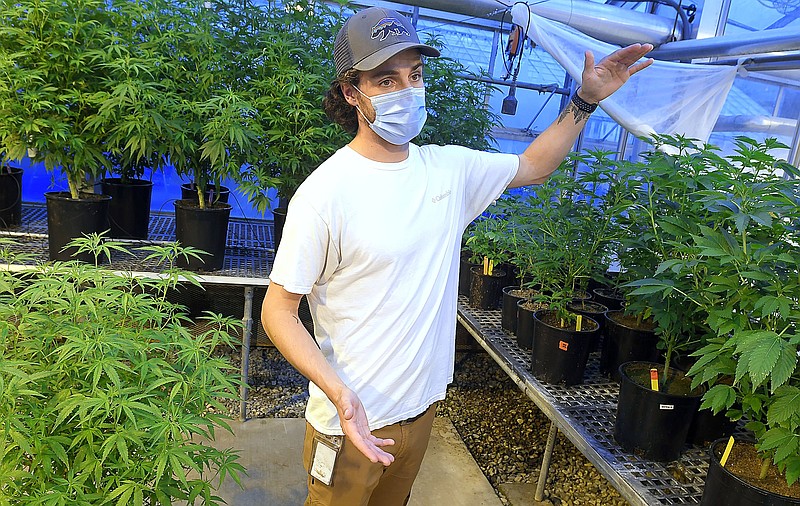 Mitch Westmoreland talks about the hemp research that he is working on at Utah State University on Tuesday, July 28, 2020 in Logan, Utah. Ninety years ago, hemp researchers at Utah State University grew cannabis for rope and had no way to test the THC content in crops other than smoking it and monitoring the effects. Research halted in 1970 when then-President Richard Nixon signed the Controlled Substances Act. Now that it's legal to grow once more USU researchers are back at it — only this time, they're using technology and testing to determine the optimal ways to grow the plant for high yield and cannabinoid content, and what that means for Utah growers. (Eli Lucero/The Herald Journal via AP)

LOGAN, Utah - Ninety years ago, hemp researchers at Utah State University grew cannabis for rope and had no way to test the THC content in crops other than smoking it and monitoring the effects. Research halted in 1970 when then-President Richard Nixon signed the Controlled Substances Act.

Now that it's legal to grow once more, USU researchers are back at it - only this time, they're using technology and testing to determine the optimal ways to grow the plant for high yield and cannabinoid content, and what that means for Utah growers.

"We do a lot of trying to nurture these plants as best we can," said Mitch Westmoreland, the Ph.D. student running the lab at USU's greenhouse. "But then we also go on the other side of things and see how much we can torture these plants without them dying. One of the big questions that a lot of people have, especially in Utah, is how drought stress affects cannabinoid concentration."

There are at least 66 different cannabinoids in cannabis flower, with THC and CBD being the most well-known. Where THC is the only known component to be psychoactive, CBD's uses seem to be purely medicinal, with studies suggesting it reduces epileptic seizures and soothes a multitude of other health issues.

Cannabis plants that come in with more than 0.3% THC are referred to as marijuana, while hemp refers to those with low THC and higher CBD counts. Where there are only eight growers in the state licensed to farm medical-grade marijuana, there are roughly 12 farms in Cache Valley that received permits to grow hemp.

Most of USU's funding comes from large-scale growing operations across the United States. Because it was illegal to grow cannabis in Utah for so long, a lot of the university's preliminary testing is debunking claims related to growing the plant.

"All these people that have been growing it illegally, they didn't study science in school, like biology and all the principles, so they make a lot of observations and a lot of bizarre conclusions," said Bruce Bugbee, the USU professor over the project. "Like you need to plant at the full moon and the world of cannabis is full of stuff like that."

In January, he posted a video to YouTube debunking a claim that specific colors of light are needed to produce higher yield for harvest.

Another cannabis-growing claim is that the plant needs an exorbitant amount of phosphorus to produce more flower - the part of the plant that houses CBD, THC and cannabinoids. Not only did it prove ineffective in terms of yield, but Westmoreland said using less phosphorus can have a huge impact environmentally.

"The implications are huge just because phosphorus is a huge pollutant," he said. "It's polluting the lakes and the rivers, and people just dump it on in agriculture. Very rarely do you see phosphorus toxicity (in plants) so there's really no harm to over-applying, at least to the farmer, but the downstream effects are huge."

For example, high amounts of nitrogen and phosphorus in lakes and water sources can lead to increased algal bloom, which can then choke out other aquatic species like fish.

Similar to the indoor, controlled research, the cannabis old-wives' tales have proven false in the outdoor fields helmed by Dr. Matt Yost, an assistant professor and the agroclimate specialist for USU Extension, and grad student Tina Sullivan. At least, those that have been tested.

While the indoor greenhouses can be tailored to control for nearly every aspect of the plant's life, the outdoor research has seen a steeper learning curve.

Many farmers decided to try their hand at growing hemp for CBD after the Farm Bill legalizing hemp production passed in 2018. But like USU's researchers, it was a new product and not all fields had a profitable outcome.

"We got approval to study it in the field in April, and we planted in May," Yost said.Another problem outdoor growers are seeing is that hemp is "finicky," Sullivan said. In addition to farmers' only option for herbicides being pre-emergent - as hemp generally needs to be planted from cloned cultivars to exclude male plants from crops - it needs massive care.

Market fluctuations have also come into play. "Back when this was legalized, you know, two years ago, a year and a half ago, the price was around $20 a pound, so it was worth it for a lot of people to go into it," Westmoreland said. "Since the market was saturated with growers across the nation growing for CBD, the price has gone down to about $5 a pound."