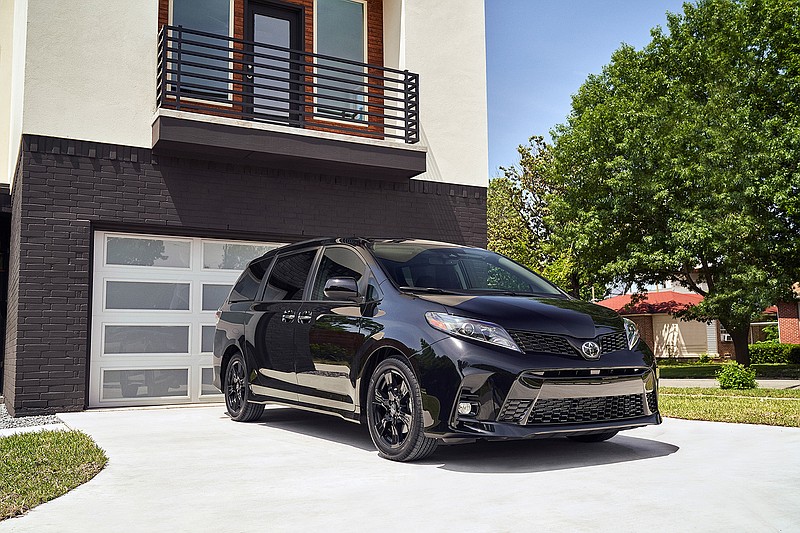 If you like a reliable vehicle with a great track record, say hello to the Toyota Sienna AWD. (Toyota/TNS)

2020 Toyota Sienna SE Premium AWD: You won't but you should.

Conventional wisdom: "It's not cool, so we need an SUV."

Marketer's pitch: You shouldn't care about that, and, no, you don't need an SUV.

No, you don't: I reside in the hinterlands of Chester County, Pa. Plowing used to be a thing, but then it mostly seems to have stopped, or else it doesn't happen when I need it to (late, late at night).

If I've survived without an SUV, you can, too. Climate change may finally render this judgment obsolete - we may ALL need SUVs, or amphibious vehicles, or Sherman tanks - but right now, anything all-wheel drive works just fine for most situations.

Cue the angry emails: Yes, of course, you need an SUV. And you. And I'm well aware that SUVs are now 50% of auto sales, so half of all car buyers now want to smack me. (And SUVs are not inherently evil; I'm driving a Lexus UX right now that gets 41 mpg.)

But most of us still don't need one.

The Great White North: Don't believe me? I had a chance in November to take the 2020 Sienna to the backwoods of New Hampshire and Vermont. I ventured onto snow-covered dirt roads. It performed beautifully in about an inch or two of white powder, up hills, down hills, on curves - never even a slip.

Now, the person I was visiting owned a Jeep Wrangler, and I'm sure at some point, she'll need it. But most of us don't.

What's new: So, I didn't come here just to annoy you. I also come here to highlight what's new in vehicles, and obviously the Sienna is not all that new - it's looked pretty much the same since its last redesign in 2011 (which happens to be the year of the Sturgis Family Sienna). But it's come a long way.

On the road: This remains the most noticeable improvement. The Sienna doesn't handle like a walrus anymore, flipping and flopping around winding roads. There's also a Sport mode that makes the steering even more taut and renders the handling seamless. It's not fun, but it's fun enough.

Friends and stuff: My wife and I spent some long hours headed to New England and back, and the comfort was superb.

The second and third rows are also as roomy as ever, and the cargo capacity is the biggest of all SUVs and minivans - 150 cubic feet. We fit in a 60-inch round dining-room tabletop, eight moving boxes, and lots of luggage and gifts, and we still had room for more.

Up to speed: The Sienna is no slouch getting on the highway either. The 3.5-liter V-6 creates 296 horsepower. That's on par with muscle cars of 50 years ago, and they are cool. And this minivan hits 60 mph in 7.1 seconds, according to a 2018 test by Motor Trend.

Shifty: The 8-speed transmission functions just as well as the 6-speed in the 2011. It's mainly unobtrusive but occasionally adds a little jolt here and there, usually on curves or hard turns when accelerating.

Play some tunes: Toyota has finally tuned up the stereo. The Premium JBL audio performs far better than the system in the Sturgis family Sienna. I won't even play some songs in our model because the performance is so bad.

Dials control the volume and tuning, and the touchscreen is Toyota's standard simple control.

Fuel economy: I averaged a consistent 21.6 mpg when running the Sienna on the highways during a trip to New England. It fell a few tenths in Philadelphia.

Complaint department: I always had a problem filling the gas tank on this model. It would hit about three-quarters and decide it was full.

Something else Toyota should have addressed a long time ago - the gas tank lever and the hood lever may be a couple of inches apart, but they are identical levers. This is dangerous. Even after owning a Sienna for years, I find myself concerned I may have pulled the wrong one.

I was reminded of this when I noticed the Sienna hood starting to shake a bit on the interstate. Either I pulled the lever - and I'm 99% certain I didn't - or someone before me did, and I'd already put more than 500 miles on it that way. Eek.

Where it's built: Princeton, Ind.

In the end: If you like a reliable vehicle with a great track record, lots of space, and some winter performance, here's the model for you. But Chrysler is planning an all-wheel drive Pacifica, and Mr. Driver's Seat's practical little heart is already lusting.