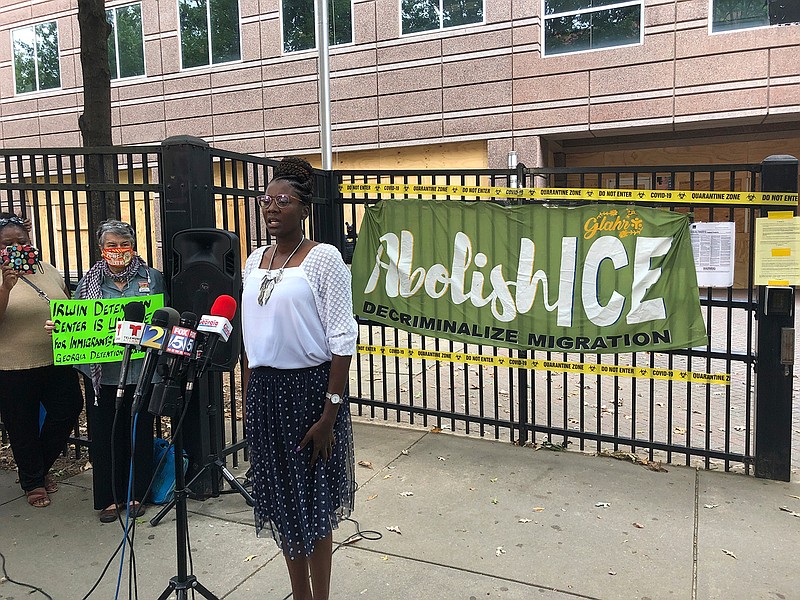 In this Tuesday, Sept. 15, 2020, file photo, Dawn Wooten, a nurse at Irwin County Detention Center in Ocilla, Ga.,, speaks at a news conference in Atlanta protesting conditions at the immigration jail. An Associated Press review of medical records for four detained immigrant women at the detention center and interviews with lawyers have revealed growing allegations that a gynecologist performed surgeries that the women never sought or didn't fully understand. (AP Photo/Jeff Amy, File)

WASHINGTON - Medical mismanagement and falsified records may have contributed to the deaths of immigrants held at for-profit detention centers that are run under contract with the federal government, according to a report released Thursday by the House Oversight and Reform Committee.

The report, based on a yearlong investigation by Democratic committee staffers, recounts numerous examples of medical misdiagnoses, incomplete or incorrect treatment for chronic illnesses and "grossly negligent" responses to infectious diseases including hepatitis, tuberculosis, meningitis and HIV. It also notes severe delays in emergency response to strokes and heart attacks, negligent suicide watches and deficiencies in psychiatric care that led one detainee to self-mutilate.

The investigation focused on facilities under the authority of two Homeland Security agencies, Immigration and Customs Enforcement, and Customs and Border Protection.

The investigation was launched in July 2019 by Maloney's predecessor, the late Elijah E. Cummings of Maryland.

The report cites, for instance, falsification of records involving Jean Carlos Jimenez-Joseph, a 27-year-old Panamanian migrant who committed suicide in May 2017 at ICE's Stewart Detention Center in Georgia after reporting hallucinations and suicidal thoughts.

Jimenez-Joseph was a recipient of Deferred Action for Childhood Arrivals, an Obama-era program that allows undocumented immigrants who came to the country as children the ability to live and work in the United States. He was detained 69 days at the Georgia facility, which is run by private prison company CoreCivic, after being arrested for a misdemeanor in 2017.

The House Oversight reports also cites a review by Homeland Security's Office for Civil Rights and Civil Liberties of the Adelanto detention center, a California facility run by the company GEO Group. That review reported that a "failure to hire an effective and qualified clinical leader contributed to the inadequate detainee medical care that resulted in medical injuries, including bone deformities and detainee deaths."

Medical care in ICE custody also has been under intense scrutiny during the pandemic, as the number of positive cases of COVID-19 has steadily climbed since March. The report notes that as of Sept. 23, more than 6,000 detainees and 45 employees at ICE detention centers nationwide have tested positive. This includes 16 facilities run by GEO Group and another 16 facilities run by CoreCivic.

According to the report, employees at a CoreCivic facility in Mississippi tried to impede congressional inspection during a delegation visit after a detainee tried to flag down committee staff to complain about abuse and humiliation.

Despite issues revealed through internal audits and reviews, since 2017 "the Trump Administration has awarded its two biggest detention contractors, CoreCivic and GEO Group, more than $5 billion in contracts to operate private detention facilities," the report said.

An ICE spokesperson released a statement saying that all of its facilities go through an "aggressive inspections program," and that a majority of the inspections are conducted by a third-party contractor. The spokesperson also pointed to a 2018 Office of Inspector General report that found that ICE's Office of Detention Oversight "uses effective methods and processes to thoroughly inspect facilities and identify deficiencies."

However, that same report noted that those inspections were "too infrequent to ensure the facilities implement all corrections" and that ICE "does not adequately follow up on identified deficiencies or systematically hold facilities accountable for correcting deficiencies." In addition, the report found that the third-party inspections were "not consistently thorough."

CoreCivic spokeswoman Amanda Gilchrist told CQ Roll Call that the company had not received a copy of the report Thursday and could not comment on details.

She noted that prior to November 2018, CoreCivic did not provide medical services at Georgia's Stewart center and attributed the responsibility of that care to ICE's Health Service Corps. She said the congressional tour at the Adams County Correctional Center in Mississippi "was facilitated by our government partner."

GEO spokesman Pablo Paez said the company denied the report's "baseless allegations, which are part of another politically driven report that ignores more than three decades of providing high-quality services to those in our care."

The House Oversight report follows a whistleblower complaint filed to the Homeland Security inspector general alleging "jarring medical neglect" and mismanagement of the COVID-19 crisis at an ICE facility in Georgia. The complaint included comments from detainees and a nurse, Dawn Wooten, employed at the facility until July 2020, who alleged that hysterectomies were conducted on some women without proper consent.

At his Senate nomination hearing Wednesday, acting Homeland Security Secretary Chad Wolf said the "dramatic allegations" in that complaint were being investigated by the department's inspector general.

A separate report issued earlier this week by the House Homeland Security Committee found similar issues with medical care in ICE detention. It also found evidence that segregation was "frequently used as a form of threat or retaliation to assert control and gain compliance."