Honeybees dying off? It depends on whom you ask 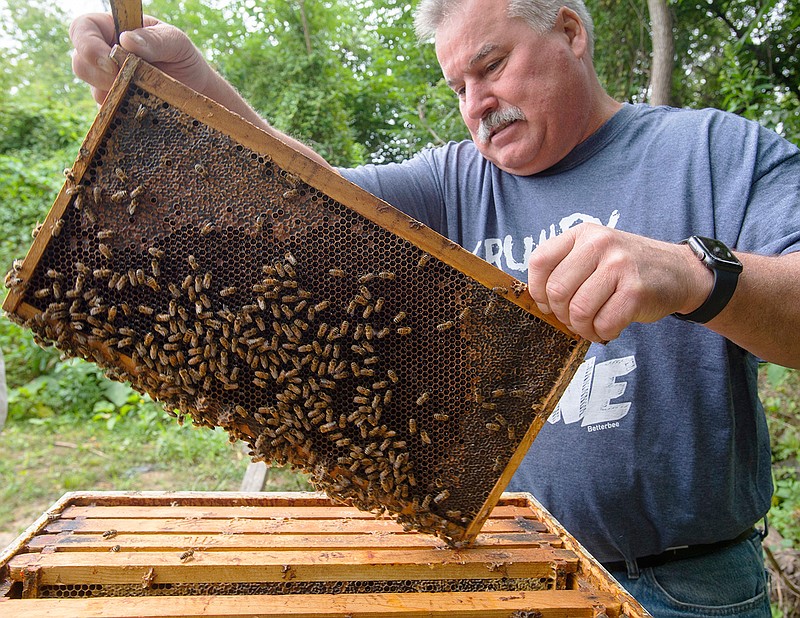 Paul Snellen, master beekeeper of the Pennsylvania Beekeepers Association, pulls one of the boards covered with bees Wednesday, Aug. 4, 2021, in Allentown, Pa. Beekeepers in the U.S. lost an estimated 45.5% of their managed honeybee colonies last year, according to a survey conducted by the nonprofit Bee Informed Partnership. Pennsylvania's beekeepers reported a 54% annual loss, and Snellen estimates Lehigh Valley losses at around 30%-40% or more. (Rick Kintzel/The Morning Call via AP)

ALLENTOWN, Pa. - Talk to a local beekeeper, and the potential consequences of the decline of the honeybee population are alarming, causing problems for pollination and sending ripple effects through the food supply chain and the entire ecosystem.

Talk to a different beekeeper, and the deaths of honeybees may be overexaggerated, misleading the public about the supposed peril of billions of the hive-dwelling insects bred for crop pollination and honey production across the state and around the world.

For all the beekeepers can agree on - that bees themselves perform the daily tasks of keeping the hive running, from attending to the queen to building the comb and defending the nest - they differ on their methods to circumvent decline and protect the insects supporting the state's biodiversity and agricultural industries.

People like Bethlehem's Paul Snellen teach and embrace the rituals of conventional beekeeping, including hive treatment options that Snellen acknowledges can have some adverse effects. Others, like Rodale Institute's Mike Schmaeling, prioritize a chemical-free method focusing on the resilience of bees and innovative breeding techniques.

But overall, as beekeepers work collectively to manage colony health, they're still fighting an uphill battle.

Beekeepers in the United States lost an estimated 45.5% of their managed honeybee colonies last year, according to a survey conducted by the nonprofit Bee Informed Partnership. Pennsylvania's beekeepers reported a 54% annual loss, and Snellen estimates Lehigh Valley losses at around 30%-40% or more.

The numbers prove beekeepers are encountering mass demise and must constantly work to restore honeybee numbers. They can only do so by honing in on the main causes of colony loss in their operations.

In 2017, beekeepers, researchers and conservationists from across the state gathered to write the Pennsylvania Pollinator Protection Plan. It outlined threats facing the honeybees and offered advice on how best to protect them.

The recommendations, which included best practices for beekeepers and pesticide use, were spurred by threats to pollinators. During the winter of 2016-17, beekeepers across the commonwealth reported 52% losses in their colonies. Other pollinators, like some species of butterflies, moths and bumblebees were found to be at risk, too.

However, beekeepers' losses have remained steady over the last five years, with beekeepers losing about half their honeybee colonies annually.

It's not just Pennsylvania feeling the economic and environmental impact as colonies collapse. Honeybees are moved around the country to pollinate crops such as blueberries, almonds and apples. That's why it's important to ensure the health of both commercial and backyard honeybee colonies critical to food production and supply.

Today, Snellen and other local experts point to a handful of key factors responsible for the largest die-offs:

Over the last few decades, pesticides have become what beekeepers say are a necessary evil among crop farmers. But those chemicals coat the seeds of many crops, and the amount of pesticides that reside on plants that honeybees pollinate is a huge factor in bees dying off.

"That land has just been treated and tilled and sprayed. There's nothing in there that's beneficial," Schmaeling said during a recent interview on Rodale Institute's Kutztown campus. "And all (the conventional farmers) are relying on is that the seed in the ground is treated and genetically modified to grow. But there's nothing else (the soil) doesn't have any health or life in it."

Scientists have found that when bees consume pesticides, it can impair their ability to navigate, reproduce and communicate with other bees.

"If these bees are, you know, buzzed with certain types of insecticides, then they don't have to be dead - but if their nervous system isn't working properly, combine that with viruses, combine that with the fact that their strength is not up there because of mites, these things kind of accumulate and can cause problems," said Marten Edwards, chair of Muhlenberg College's biology department.

The parasitic bee mite, varroa destructor, is cited by the USDA as one of the most serious pests of the honeybee.

Female mites attach to the adult bees, feeding on their hemolymph, a fluid equivalent to blood found in invertebrates, according to the agency. And, when there are a lot of mites present in a colony, they can create malformations like shortened abdomens, misshapen wings, deformed legs or even result in the death of the pupa, the early, immature life stage of a bee.

"So it's not like we can just ban a certain type of insecticide and we'll be fine," Edwards said. "It's not that we can cure the varroa mite problem and we'll be fine. There are many complex challenges that are really hard to separate from each other."

As the state's agriculture industry grows and farmers work to increase yields, both native pollinators and managed, nonnative honeybees are losing their habitats, another key issue when researchers and scientists look at colony collapses and annual losses.

"Agricultural practices have changed that there's almost no weeds on the borders of our fields, in the fields," Edwards said. "And if you're a farmer, that's a good thing. If you're a farmer, you don't want to have lots of weeds in your fields - I get it."

But it's not good for the bees - what might look like a just a patch of weeds to people is home for the honeybees and vital to other native pollinators, he said.

Dense agricultural areas, like in Monroe County, have proven to be an issue for honeybees, Jeremy White of Pocono Apiaries said. He lost about 50% of his bees last year, and said other beekeepers in the area are facing similar losses.

"We need those farms, for sure," he said, explaining that corn and alfalfa are good crops for people and the agricultural industry. "But that is not good for the bees."

The Lehigh Valley Beekeepers Association has bolstered its ranks to almost 300 members from Lehigh, Northampton, Carbon, Berks, Bucks and surrounding counties. The group's mission is to promote the art and science of beekeeping, and Snellen is among its master beekeepers - those considered to have extensive knowledge of honeybee biology and expertise in the proper practices of beekeeping.

Even as a hobbyist, Snellen takes the job seriously. He builds his own beekeeping boxes, and his diverse operation in East Allentown includes treating and feeding thousands of honeybees (upward of 40,000 per box currently, while those populations can be much higher at other parts of the year).

When honeybees are not able to collect enough food through natural sources, which is known as a dearth, people like Snellen step in. "For a colony low on food, at a time of year when you have that dearth and there are no flowers and nothing to pollinate, that sugar water can mean the difference between life and death," Snellen said, while noting the practice creates division among beekeepers and depends on the location and condition of each colony.

The sharing of such techniques and information among local beekeepers is imperative to sustaining honeybee populations, Snellen said, noting there is really no oversight for bad backyard beekeepers. While some practices on managing hives can be polarizing, complete neglect and a lack of proper inspections of hives is an even bigger problem.

"I believe if you can afford to buy bees, you can afford to manage them properly," he said. "By not properly maintaining your hives, you are contributing to this continuous cycle of issues. Educate yourself and take the proper actions to become a responsible beekeeper."