No bail for capital murder suspect accused in September shooting in Texarkana, Arkansas 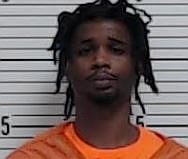 TEXARKANA, Arkansas -- A man arrested in Tennessee in October on a capital murder warrant stemming from a fatal shooting in Texarkana in September is being held without bail in the Miller County jail.

Cornell Brown, 30, is accused of shooting 40-year-old Keith McFadden on Sept. 20. McFadden, of Texarkana, Texas, was found suffering from a gunshot wound in a yard on East 11th Street in Texarkana, Arkansas, and died shortly after he was discovered, according to earlier reports. Emergency calls regarding gunfire in the area of East 11th and California streets were received shortly before 9 p.m. Sept. 20.

A warrant was issued for Brown's arrest Oct. 8.

Jail records show Brown was booked into the Miller County jail Nov. 30. He made an initial court appearance Friday before Miller County District Judge Tommy Potter, who ordered that Brown will be held without bond.

If convicted of capital murder, Brown faces life in prison without parole or a death sentence.