Hoping for a dog phone? You may have a long wait 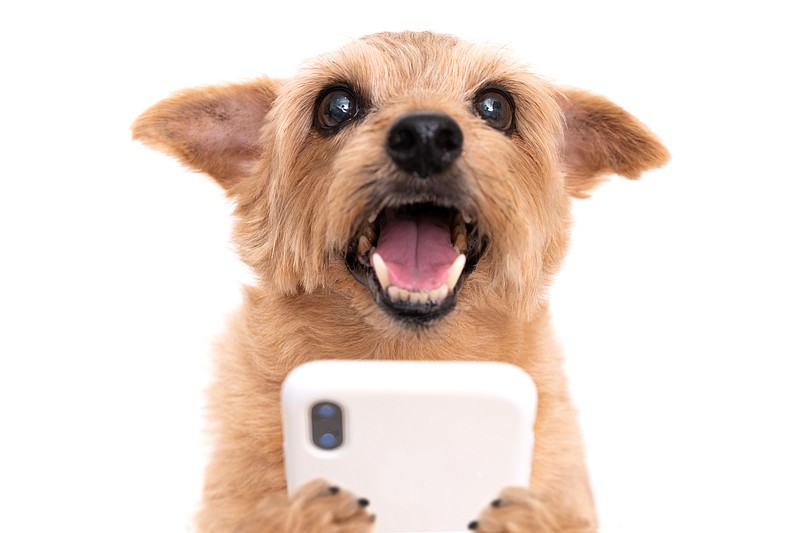 Away from home, dog owners can use technology to talk to their pets, track their every movement, launch projectile treats into the air and even spy on them while they're sleeping.

Dogs themselves can't do much more than watch longingly out the window. Maybe that's why the possibility of a "DogPhone" briefly entranced the media world. Who wouldn't want to take that call?

But the new research that inspired those stories, led by Ilyena Hirskyj-Douglas, an assistant professor at the University of Glasgow, was mostly aspirational.

The study involved only one dog. The device was not an actual phone, nor is anything of the kind close to market. And the results were, at best, inconclusive.

Using a ball equipped with a motion-detecting device that triggers video calling, Hirskyj-Douglas, whose specialty is animal-computer interaction, gave her 10-year-old Labrador retriever, Zack, the power to call her by just moving his toy.

"I thought something like this could help dogs in some way to have more control and have choices," Hirskyj-Douglas said in an interview. "We decide so much of their lives that maybe having this choice alone is kind of exciting in itself."

The research, published last month in the journal Proceedings of the ACM on Human-Computer Interaction, took place over the course of 16 days, with variations in the sensitivity of the device. Zack was not trained to use the so-called DogPhone, the researchers said.

During the experiment, Zack called Hirskyj-Douglas about five times a day and more than 50 times in all. Almost all of the calls appeared to have been made by accident, the study said.

"Dog was playing with his pig and accidentally nudged the ball," the record of one 30-second call reads.

"Dog called by accident (climbing onto sofa) and then went to sleep," reads the next, lasting 16 seconds.

And in dozens of calls, the dog was asleep when he nudged the motion sensor into action. "Dog sleeping cuddling the ball."

A leading animal behaviorist, Patricia McConnell, was skeptical about the study. "A sample of one -- one person and one dog -- does not a study make," McConnell said, "and I wish there had been more effort to train the dog to use the device instead of hoping he'd figure it out."

But she said the authors were "to be commended for their interest in finding ways to give dogs more agency in their lives, especially when left home alone."

She said the study raises interesting issues. "Do our dogs want to hear from us when we're away from home? Or would they say, 'Don't call me, I'll call you?'"

In the paper, Hirskyj-Douglas and her colleagues acknowledged their limits in understanding what a dog meant, or didn't mean, to do. "It is possible that we humans might not know what an animal's intentions are, or how they would interact with computer systems intentionally," they wrote.

In the study's final days, interactions with Zack were longer, and he called more often, whatever his intent.

During their video calls, Hirskyj-Douglas told Zack about her day and talked about upcoming dog park visits. He was especially engaged, she said, when she flipped her camera to show him the city that she was moving through, walking past buskers and commuting underground.

He was not always so engaged. "Dog rang me but was not interested in our call instead was checking for things in his bed," Hirskyj-Douglas wrote of one call. "He was busy elsewhere."

She noted that Zack never picked up when she called.

Hirskyj-Douglas said that although her research did not reveal what Zack meant to do, it demonstrated that dogs could use an interactive digital device such as hers, if they are given the option.

"They don't always have to be these passive users of technology that we're making, and yet all technology that mostly comes out is passive usage," she said, adding that her research "showed the future of dog technology can be very different from what it currently is."

The pet surveillance business is booming. As products with cameras, speakers and GPS devices have proliferated, an increasing number of pet owners are turning to devices that let them be with their pets, even when they're not physically in the room.

Last year, the pet tech market value topped $5.5 billion, according to an industry report by the research firm Global Market Insights, which projects that the market will swell to more than $20 billion by 2027. Top-selling products include collars and toys equipped with GPS trackers.

Hirskyj-Douglas said that technology such as her device, which was not developed for sale, could potentially help assuage isolation and separation anxiety in pets -- a problem that many pet owners have noted over the course of the coronavirus pandemic.

Experts said it was unclear to what extent dog technology products could help.

McConnell, a retired professor from the University of Wisconsin-Madison, and Dr. Andrea Tu, a behavior veterinarian who was also not involved with the research, said there was very little research about technology made for dogs.

Current products on the market, such as video cameras, could be great for some pets, but could create more anxiety in others, they said. They also noted inconclusive research about whether dogs could fully recognize human faces on screens.

"Dogs are so variable, they're just like us," McConnell said. She said she was fascinated to see more research on the agency and autonomy of pets, and how it might change human relationships to dogs.

Hirskyj-Douglas, who dedicated the study to her dog, said she hoped there would be a shift to the use of networked devices to expand a pet's world and give a greater sense of freedom.

"I'm a crazy dog lady who would love to see more dog-controlled technology," she said.

Print Headline: Hoping for a dog phone? You may have a long wait