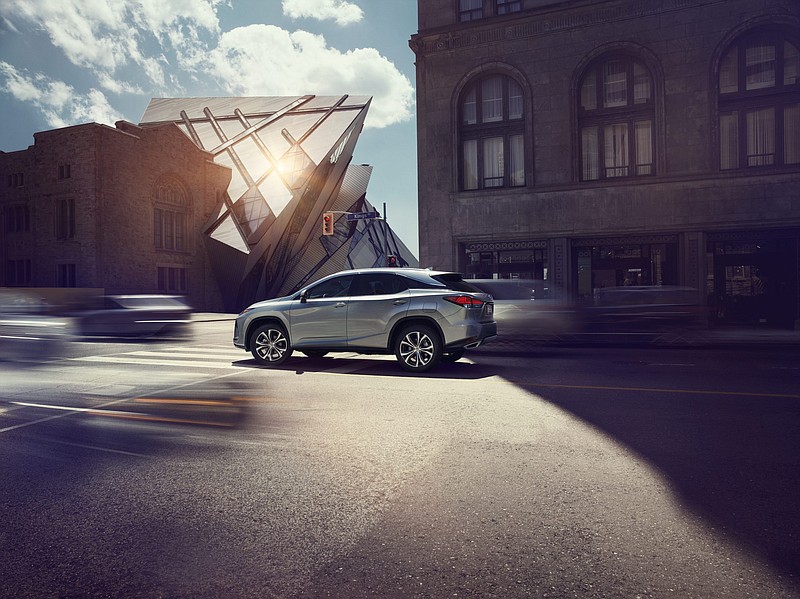 One might find a quieter, more luxurious, more rewarding, more reliable, more fuel-efficient midsize luxury SUV than the Lexus RX 450 hybrid, but it would cost twice as much.

The Lexus RX series, starting around $45,320 is based on Toyota's desirable and worthy Highlander Hybrid, which starts at around $35,205. More than any other luxury line of a mainstream automaker, Lexus earns its premium with exquisite attention to detail. Tolerances and alignment are spot-on, materials feel genuine and handcrafted, everything one touches, sees, and feels has the whisper of quality.

"It makes me feel special," said Blonde Bride as she snatched the key and headed out on yet another errand.

That, my friends, is the magic of Lexus.

Consider the Cadillac XT6, based on the same hardware as the Chevy Traverse, GMC Acadia, and Buick Enclave. It looks quite lovely when all gussied up. The front is dramatic, but from the side, the Caddy looks like just enough Chevy. Worse, the XT6 does not surpass its cousins' dreadful fuel economy and reliability record.

Then, there is the very good Acura MDX, a luxury trimmed version of Honda's quite excellent Pilot. While the RX consistently ranks in the top tier among reputable rating services, such as Consumer Reports and U.S. News and World Report, the more-expensive MDX comes in a notch or two below.

What separates the RX from the MDX?

Both are built well, have the best safety gear and the latest driver-assist tech, both are loaded with desirable features. Disaggregate the data, and one discovers the big difference comes in owner satisfaction. Acura's scores there are above average, but Lexus' are sky-high. Add in a fantastic dealership experience, bulletproof reliability, and strong resale values, and Lexus owners are happy campers.

In terms of attracting buyers, Lexus wins the value equation by giving luxury buyers more of what they are looking for than pricier rivals. The only competitor that consistently outscores the RX is the BMW X5, the best-handling SUV in this solar system. The X5, which has received high praise in this space, costs between $60,000 and $106,000 and is significantly less reliable.

No, the RX does not handle anywhere near as well as the X5, even with the optional F Sport package. Then again, few folks buy a Lexus to run time trials.

The RX hybrid version, our tester this week, delivers an EPA-estimated 30 mpg, about double what we got out of a recently tested X6 and roughly a third better than the best of its gas-only competitors. That gets the hybrid Lexus compared to things like the all-electric Tesla Model X, ($80,000 to $120,00), the Jaguar I-Pace ($70,000 - $81,000), and the Porsche Cayenne Hybrid $82,000 - $167,000). Those apples may be better than Lexus' oranges, but buyers of those nameplates are on a different spiritual path.

For the record, let me add that it is misleading and confusing to compare base-electric vehicles, which depend on charging stations, to hybrids, which can go anywhere there is a gas station.

Automakers, power companies, private investors, and the government are industriously building out the nation's charging network, but the technology is new and there is a long way to go.

Hybrids, in which an electric motor assists the gas engine, charge their batteries. The technology has been around for years. In my driveway sits a 14-year-old Highlander Hybrid that runs like a top, doesn't leak a drop of anything, and still delivers nearly 30 mpg.

The 2022 RX 450h is much better. It pairs a 3.5-liter V6 gasoline engine with two drive motor-generators for a combined 308 hp. The electrics deliver instant torque, meaning instant acceleration from a dead start and when passing. Instead of transfer gears and a driveshaft, the second motor drives the rear wheels, when needed, to help maintain optimal traction.

Pressing the throttle is like sleeping in silk sheets: stable, secure, coddled.

The RX is not without its faults.

One is that it was initially designed to be a five-seater and a third row was added to broaden its appeal. The result is that third-row seating is cramped, and cargo space is crimped.

These vehicles work best for smaller families. Our Highlander's third row is rarely up. The resulting cargo space feels like an enclosed pickup bed and frequently is used that way. Rocking chairs, dressers, plants, have all traveled back there. Hey, it all comes out with a good vacuum, preferably someone else's vacuum.

The biggest flaw in this and every Lexus is the boneheaded infotainment system. Everyone, I think even the Pope, has told them to get rid of the goofy touchpad thingy that seems always to land the cursor in the wrong spot and, indeed, turns the driver into a curser.

After years spent trying to get the thing to work in scores of Lexuses, I've adopted the Nancy Reagan approach. Just say no.

The good news: The voice command system is as good as it gets. Forget clicking screen icons. Just tell the thing where you want to go, where to set the thermostat, and what you want to listen to along the way. It will even find gas stations and restaurants for you.

Safety is an area where Lexus soars above the crowd.

In addition to top-drawer crash scores, the RX surrounds occupants with a rich array of advanced safety features, such as daytime bicyclist detection, low-light pedestrian detection, road sign assist, lane tracing assist, blind-spot monitoring, and rear cross-traffic alert. It easily keeps itself a safe distance behind traffic ahead and in its lane.

One should expect no less from a properly raised luxury car these days. 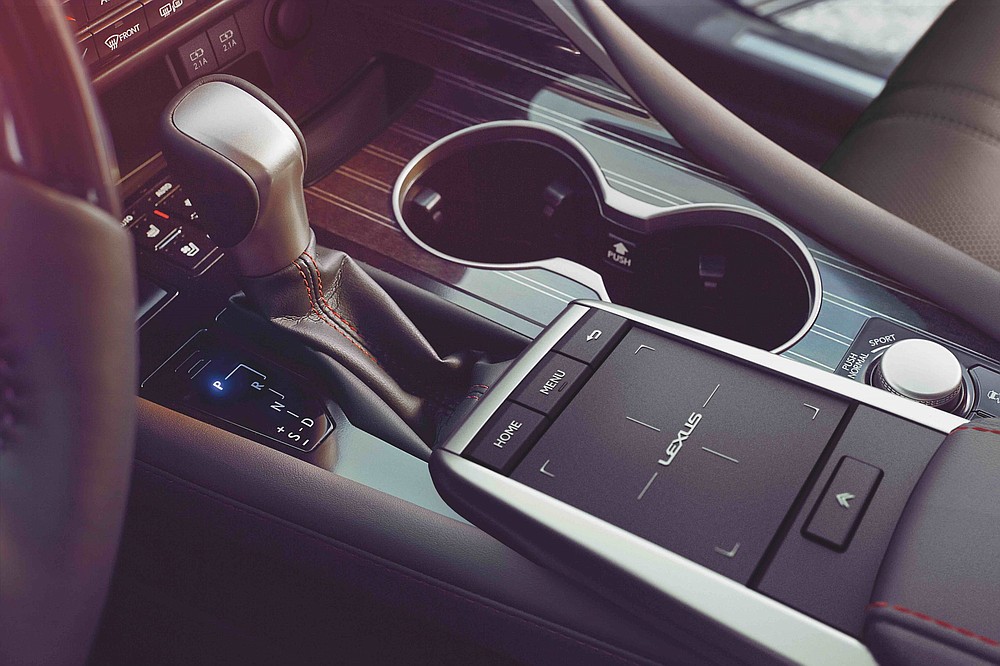 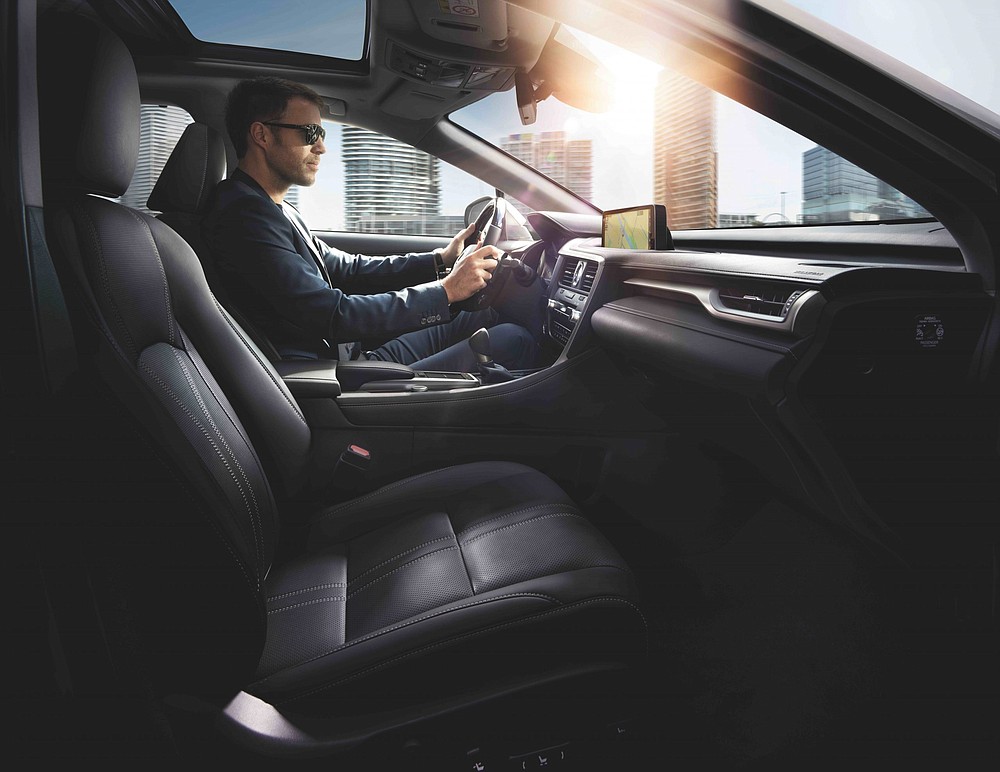