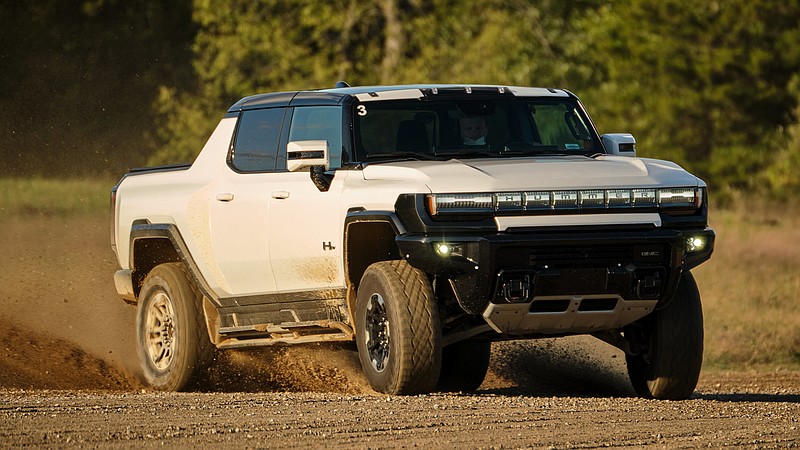 The Detroit News got a rare opportunity behind the wheel of the mega-ute at General Motors' 4,000-acre Milford Proving Grounds, where it showed off its bag of tricks. Reborn as an electric vehicle 30 years after it invaded U.S. roads as a military-Humvee-turned-SUV, the upcoming GMC Hummer aims to be the General's halo for a new generation of electron-powered autos.

A halo performance pickup? It's true. The Hummer EV truck, expected to hit dealerships by year's end, is being produced in the automaker's Factory Zero at Detroit-Hamtramck Assembly Center. Overall, GM is investing $35 billion through 2025 in electric and autonomous technologies, and plans to have 30 EVs globally in that time frame.

Brands have used super cars to showcase their best engineering, but battery size (the Hummer reportedly weighs more than 9,000 pounds) can inhibit sports cars compared with their lighter gas peers. Enter the electric super truck, which doesn't sweat the added weight -- and even benefits from the battery pack's location between chassis frame rails to lower the center of gravity for better handling. Armed with three electric motors, 1,000 horsepower and state-of-the-art electronics, the 2022 First Edition model should come with a cape.

I mashed the accelerator and the Hummer EV's jaw jutted upward. Then it devoured a gravel and dirt road, evenly distributing torque between its four 35-inch off-road tires. Then this elephant in tennis shoes showed off some circus tricks.

I rotated the beast in a 37-foot circle -- equivalent to a much smaller Chevy Equinox -- then pitched it through a tight slalom like a sedan.

Credit all-wheel-steer that can angle rear wheels up to 10 degrees. It's reminiscent of the Ford Bronco's Trial Turn Assist, which brakes the inside front wheel to achieve similar results. Turn off Traction Control and Hummer will do dirt doughnuts. The maneuverability is assisted by the Hummer's independent rear suspension -- a novelty (the Ford F-150 Lightning EV also has it) among full-size trucks that prefer solid rear axles to maximize towing but sacrifice handling. Hummer's priorities lie elsewhere.

If the original military Humvee was armored for battle, Hummer EV is built for the Outback.

Its extreme suspension travel allows the elephant to hike its skirt 16 inches off the ground (from a normal 10.5), as well as provide a ridiculous 50-inch approach angle to manage tough terrain. In Terrain mode, I utilized 18 camera views -- two of them under the truck's belly -- to pick through a rock pile. From the 13.4-inch console screen, I monitored camera views above, below and beside the Hummer.

Inevitable slips off rocks were cushioned by the truck's sturdy frame rails and full underbody armor. Such capability is familiar to other off-road trucks -- Hummer smooths the experience with instant electric torque at my right foot.

The pickups' signature "CrabWalk" mode can be activated via the console's rotary dial. The system steers front and rear wheels at parallel angles, allowing me to escape sideways -- crab-like -- from tight spots.

Some of Hummer's EV compatriots -- think Rivian R1T pickup -- put a motor at each wheel to do derring-do like tank turns. Hummer's engineering team chose the more conventional route of e-motors mounted amidships.

"We did it for efficiency," said chief engineer Al Oppenheiser, who knows something about power, having developed the Chevy Camaro. "It's easier to move torque between the motors and it's more affordable."

Maximize torque to all three motors in the First Edition and you get GM's "Watts to Freedom" acceleration to 60 mph in just three seconds. That's on par with my electric Tesla Model 3 Performance, which weighs half as much as Hummer.

Prep Watts to Freedom with two taps of the Traction Control Button. The beast crouches on all fours. The driver's seat begins to vibrate ("Like a rollercoaster ride," grins Oppenheiser). The vibration grows stronger. Flatten the throttle pedal on GM's asphalt oval test track, and the truck explodes forward -- 60 mph goes by in a blur.

"We couldn't have done it without these tools," lead development engineer Aaron Pfau said. "It gets us 95% to where we need to be before a model hits the road."

That speed to market -- the $112,595 First Edition should make deliveries before year's end (standard $80,000 models in the first quarter of 2022) -- is guaranteed even with the semiconductor crisis plaguing industry production.

"Our volume is protected," Oppenheiser said. "For chips, seat foam, steel ... anything affected by the pandemic."

Little would seem to affect Hummer on road -- the air suspension smooths the ladder frame even at highway speeds. Like its predecessor, it is intimidating -- its broad shoulders and tall stance reflected in celebrity spokesman LeBron James. Get outta the way when Hummer wants to dunk.

Unlike its spartan predecessor, the Hummer EV's interior is a swank game room. Materials are first-rate, seats comfortable, ergonomics well-thought-out. It's capped off by two huge screens: instrument (12.3 inches) and infotainment (13.4 inches). Both are run by Epic Games' 3D Unreal Engine rendering software -- the same Epic Games behind PlayStation graphics and PC game hits like "Fortnite."

My time in the pickup was brief and performance-focused. I could have stayed longer, exploring its interior options, big backseat, six-way Multi-Pro tailgate. And then I could have removed the roof panels and spent the night star-gazing.

The panels can be stored in the frunk (front trunk), where the gas engine used to be. This isn't your father's Hummer.

Henry Payne is auto critic for The Detroit News. Find him at hpaynedetroitnews.com or Twitter HenryEPayne.