Texas defense needs quick fix ahead of No. 12 Oklahoma State 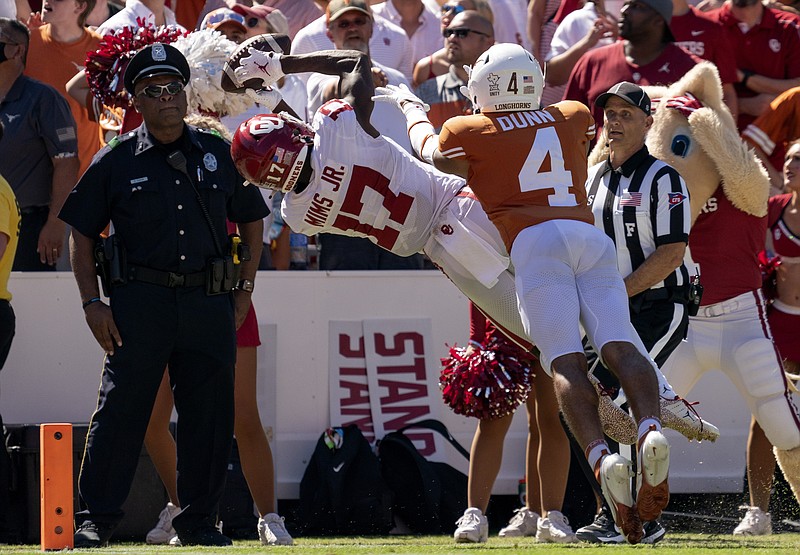 Oklahoma wide receiver Marvin Mims (17) makes a diving catch for a touchdown in front of Texas defensive back Darion Dunn (4) during the fourth quarter of an NCAA college football game at the Cotton Bowl, Saturday, Oct. 9, 2021, in Dallas. (AP Photo/Jeffrey McWhorter)

AUSTIN -- There were plenty of warning signs about the Texas defense, from big-play scores to the late-game touchdown drives, that had been overlooked in three consecutive wins.

Then came a second-half meltdown against Oklahoma that was just too much to overcome in a 55-48 loss on Saturday.

Still, Longhorns players and coach Steve Sarkisian insist there is no crisis of confidence ahead of Saturday's matchup with No. 12 Oklahoma State (5-0, 2-0). There is definitely a need for some urgency, however, if the No. 25 Longhorns (4-2, 2-1) plan to fight their way back into the Big 12 title game by season's end.

"Everybody's mad," defensive tackle Keondre Coburn said. "But we have to move on. We can look forward into December and all that, but right now have to focus on Oklahoma State."

Tackling is a troublesome for Texas right now. Longhorns defenders consistently whiffed on big plays that sparked the Sooners' comeback from deficits of 21 points in the second quarter and 18 points in the third.

"We definitely missed too many tackles at all three levels," Sarkisian said. "We practice tackling every week. We're a physical program. We work on it. Tackling's not all about the 'want to.' Our guys want to get them on the ground. it's getting back to proper fundamentals and technique to do it."

The Sooners' rally included touchdown runs of 66 and 33 yards that gashed the heart of the defense, and a 52-yard scoring catch. What looked like a bend-but-don't-break mindset while Oklahoma kicked two short field goals in the third quarter ended in a defense that was completely shattered by the end.

The Longhorns surrendered 662 total yards, 339 on the ground. Of that, 33 came on the final game-winning touchdown run by Kennedy Brooks, who ran for 217 in all.

"I think we were just trying to survive in the second half, trying to just hold the lead," senior safety Brandon Jones said.

Texas' three-man rush never applied consistent pressure to Oklahoma freshman quarterback Caleb Williams. Nor did defensive coordinator Pete Kwiatkowski, hired away from Washington at $1.7 million per year, try to rattle him with blitzes.

"That's gotta be P.K.'s call at the end of the day. I'm not the authority figure in the room," Texas defensive lineman Moro Ojomo said. "He gets paid millions of dollars and has been doing this for 20 years. What he believes we should do is what we're gonna do. We're gonna be a team."

Sarkisian noted the Longhorns "weren't able to make it uncomfortable enough" for Williams.

Texas dropped to No. 106 in the nation in total defense and the tendency to get pushed around late in games is a worry with Oklahoma State's bruising running game, where quarterback Spencer Sanders can also break free as a runner, up next.

The Longhorns will be without starting defensive tackle Jacoby Jones, who needs surgery have leaving the Oklahoma game with a foot injury. That should mean more playing time for second-year player Alfred Collins, a former 5-star recruit who is tied for the team lead with two sacks.