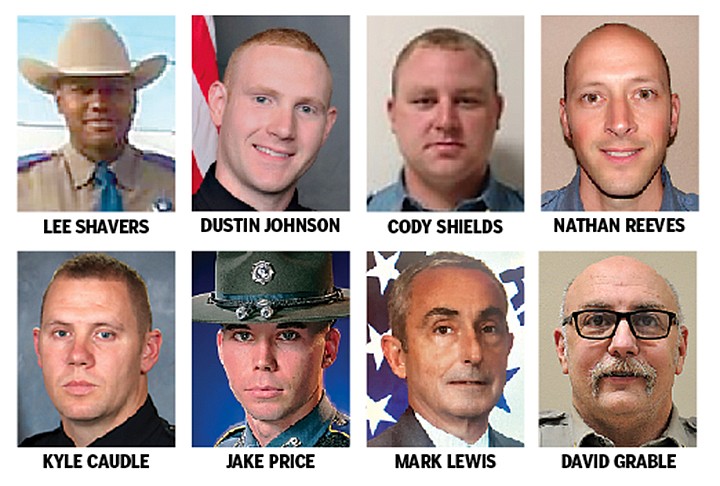 TEXARKANA -- The Wilbur Smith Rotary Club has announced this year's honorees of its Public Safety Officers of the Year Awards.

Each year, the club recognizes police officers and firefighters from both sides of the state line.

No lunch or ceremony was held this year due to COVID-19, but officers and firefighters from eight departments are still being honored.

This year's honorees are:

Texas Department of Public Safety --Trooper Lee Shavers with the Highway Patrol Division. Shavers began his career with the Department in 2014. During that time, he has exemplified the core values of integrity, excellence, accountability and teamwork, according to his supervisors.

In October 2020, Shavers was working traffic enforcement in rural Bowie County when he observed a car driving erratically. He initiated a traffic stop on the car and came in contact with a female driver who appeared to be in the midst of a medical emergency and was on the way to a hospital in Oklahoma. There were several inconsistencies with the situation, but Shavers gathered as much information as he could while also providing the medical attention necessary. A short time after this traffic stop, Shavers was notified of an ongoing homicide investigation occurring not far from his location and the driver from his stop matched the description of the suspect. Thanks to this skilled investigation as well as his attention to detail, he proved to be a valuable asset to the investigation.

Less than a month later, Shavers was dispatched to a vehicle crash. The car was upside down and submerged in Hooks Bayou. Three teen girls died in the crash. Shavers exemplified professionalism and skilled investigation in his delicate handling of the scene and later investigation of the crash.

Texarkana Texas Police Department -- Officer Dustin Johnson has served with the department for three years. He serves as a patrol officer in the operations division.

In May, Johnson recognized that his beat area was being plagued by vehicle burglars, specifically in one of the local apartment complexes. Johnson investigated and discovered what he believed to be a trail used by thieves to travel without notice in and out of the complex. He then got with his partners on the shift and developed a preventive patrol plan. On May 23, he was on foot patrol in the complex when he located vehicle burglary suspects. Officer were able to arrest the thieves by intercepting them on the very trail discovered by Officer Johnson.

Three days later, Johnson was working interdiction on U.S.Highway 59 when he stopped and arrested suspects transporting 26 pounds of cocaine. Johnson is a team player who's work ethic is second to none, according to his supervisors.

Texarkana Texas Fire Department -- Firefighter Cody Shields was selected for this honor by his peers for his outstanding service on a recent medical call. On Aug. 5, Shields and his crew were dispatched to a call where a woman was in active labor. When the crew arrived on scene Shields determined that delivery was imminent. He and the ambulance crew departed for the hospital, and while en route, Shields delivered the baby while the paramedic attended to the mother.

Shields has been with TTFD for four years and has a record of hard work and a desire to help everyone he comes in contact with. Cody holds certifications as a structural firefighter and wildland firefighter with the Texas Commission on Fire Protection and is a certified EMT.

Texarkana Arkansas Fire Department --Firefighter Nathan Reeves has served the city as a certified firefighter and licensed EMT for 17 years. On Jan.4, B-Crew was dispatched to a house fire. The structure was heavily involved with fire. Neighbors advised that a resident was possibly still inside. The crew made entry to perform a primary search and fire attack. Conditions deteriorated quickly leading to the crew been called out of the structure. While exiting, the porch suffered a total collapse trapping Reeves. He suffered multiple injuries including an extensive injury to his leg. This injury required a lengthy rehab to return to duty but, as is his nature, he returned to full duty earlier than expected. On Sept.11, he represented the department by climbing 110 stories in the 9/11 Memorial Stair Climb. This event honors the firefighters killed at the World Trade Center.

Texarkana Arkansas Police Department -- Sergeant Kyle Caudle. Caudle has been assigned to the narcotics unit, as well as other units within the agency. He leads by example and wins over the confidence of his officers. Sergeant Caudle does not mind working side by side with his officers. He is fair with his officers but also has high expectations for their performance, according to his supervisors. Caudle was asked to take over operations in the narcotics unit while the unit had gone through massive turnover and had all new detectives. He took all these changes head on with a good attitude.

In September, Caudle's work resulted in the arrest of a large-scale methamphetamine supplier. As a result of his work, the narcotics unit was able to seize approximately one kilo of suspected methamphetamine, three and a half pounds of marijuana, seven guns, including one stolen assault rifle and $24,000 in currency. The defendant was charged with 14 felony charges.

Arkansas State Police -- Trooper Jake Price. Price is assigned to Troop G and stationed in Nevada County. Trooper Price goes above and beyond in assisting the other agencies that are in his assigned county and the surrounding counties, according to his supervisors. Price has been assigned to Nevada County for one year. During that time, he has made 87 felony arrests, 175 misdemeanor arrests, served 110 warrants, arrested 19 impaired drivers, issued 810 citations, given 988 warnings, and assisted 96 motorists that were needing assistance. He also investigated 50 motor vehicle collisions, seized 460 pounds of marijuana, one pound of methamphetamine and two ounces of cocaine.

Miller County Sheriff's Office -- Chief Deputy Mark Lewis has lived in Miller County 35 years and served the citizens of Miller County and Texarkana. His career included serving as a detective with the narcotics gang unit, a commander of CID and a commander. Lewis came on board with Miller County to simply be a training liaison but accepted the position of Chief Deputy when the department was without one. Since then, he has not only remained in the position for four years but has excelled in it, thus creating a successful and safer environment for not only the residents of Miller County but the members of the Sheriff's Office as well, said Sheriff Jackie Runion.

During the past year while many administrators were challenged by trying to run agencies during a pandemic, Lewis continued the growth and betterment of the agency without sacrificing the safety of the citizens or staff. He has helped develop and implement procedures that have aided in creating a more proficient operational environment in the patrol division. Lewis has not only helped increase the success of the agency in terms of operations which led to a safer county, but he has been instrumental in building a better agency environment for the staff which translates to a better workforce for the county. These improvements range from increases in pay to better and up to date equipment. He has been apart of budgeting, planning, developing, and ensuring implementation of critical aspects for all sections of the Sheriff's Office, He He has also devoted his personal time to ensure consistent representation for the department at Quorum Court meetings and meetings with state and local level entities that may be making decisions that effect the operations of the Sheriff's Office.

Bowie County Sheriff's Office -- Capt.David Grable has been with the BCSO for 16 years and has always served the office with integrity and dedication, said Sheriff Jeff Neal. Grable is the commander of the patrol division, a unit that has been decimated by COVID-19 and shortages in qualified personnel. Grable has worked to adjust schedules to work with quarantines, sometimes with only a few hours notice. He also added himself into patrol shift vacancies and kept deputies from working shifts without backup.