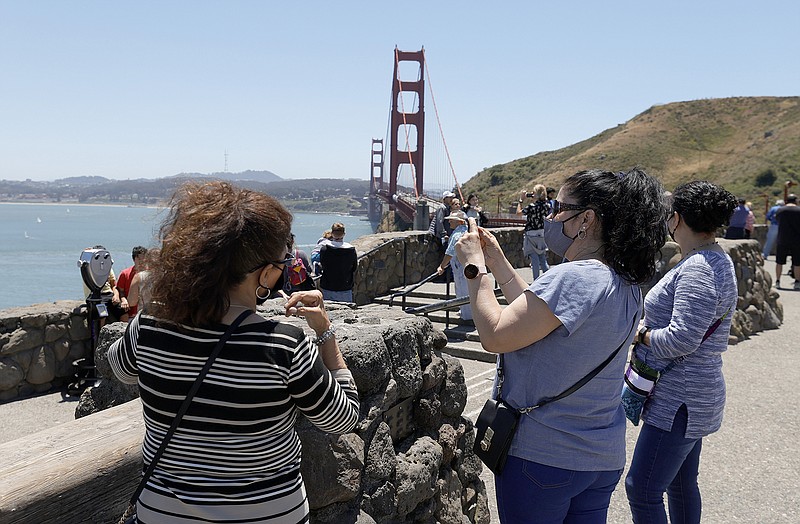 At tables overlooking the San Francisco Bay on a recent, unseasonably warm Saturday afternoon, diners slurped down oysters, cut into crepes, and shared bottles of rosé chilling on ice. The stands of the Ferry Plaza's weekend farmer's market teemed with fresh artichokes, leeks, and oranges; the empanada vendor was sold out by 1 p.m. In between the foodies was a sea of baseball fans rushing to a Giants game at Oracle Park.

Watching the bustling scene, it's easy to forget that San Francisco has had one of the slowest recoveries of any U.S. city coming out of the pandemic and was the country's worst-performing tourism market last year. Much of its tech workforce continues to work remotely, tourism from Asia has yet to rebound, and business travel has all but evaporated.

It's not just an economic toll: Drug overdoses killed more San Franciscans than COVID in 2021, and the city's homelessness problem, already exacerbated by high housing costs, has only deepened in the last few years. The downtown Tenderloin district has been hit especially hard. In a bid to turn the city's image around, Mayor London Breed recently went on a 10-day tour of Europe to attract foreign visitors and promote events.

But those grim statistics bely the much sunnier picture emerging on the ground. Vaccination rates are high, with 83% of the population fully inoculated against COVID-19. Masking requirements fell away in February and vax requirements disappeared in March, helping bars, restaurants, and museums bounce back. Even busier are the city's plentiful parks, like Mission Dolores, Buena Vista, and Alamo Square, where the mild weather brings out crowds to drink and picnic, do acro-yoga, and let their dogs run free.

Forget (most of) what you've heard about San Francisco's demise and come see for yourself.

Faced with rolling pandemic restrictions and steep rents, at least 120 San Francisco restaurants closed during the pandemic, according to SFGate. But many others thrived, thanks to the city's embrace of outdoor dining, made easier by its mild year-round climate.

Eateries on Valencia Street in the Mission District have stayed lively, in part because of their prime location on one of the city's new car-free zones. Starting Thursday nights and running through the weekends, the area--already lined with outdoor dining sheds--is taken over by pedestrians, buskers, and bikers.

Many new restaurants play off this spirit. Bao, a dumpling spot that opened in 2021, features a wide window where pedestrians can watch chefs hand-prepare shumai and red bean dumplings with panda faces ($7 for three). Next door, a cocktail bar reopened last year under a new name, Chezchez, and changed its vibe to embrace "terrace" culture: Although the indoor bar is open, most people prefer grabbing an aperitivo of tinned fish, fresh bread, and pungent cheese at the outdoor tables, washed down with inventive Bloody Marys ($15) and spritzes.

The enduring satisfaction of El Farolito and Gordo Taqueria--famed burrito spots where your only real option is getting a "super" stuffed with sour cream, rice, and guac--is one thing the pandemic hasn't changed. But for a twist, try a Filipino-style burrito filled with sweet pork at Señor Sisig, which started as a food truck and opened a brick-and-mortar location at the end of 2019.

After 15 months of dark stages, there's a bevy of events to bookmark this spring and summer, including the June productions of Don Giovanni and Dream of the Red Chamber at the San Francisco Opera. A retrospective at the Cartoon Art Museum will feature the work of Black cartoonist Keith Knight, whose comics formed the basis for the Hulu series Woke. And in place of the Museum of Ice Cream is another just-as-twee experiential (and Instagrammable) exhibit running through May: The Art of the Brick, featuring elaborate Lego creations.

Here are more options, depending on your comfort levels right now.

If you're still COVID-wary: It's possible to go an entire trip to the Bay Area and spend most of it outdoors. Post up on a bench atop the 5.4-acre Salesforce Park, which, after a rocky opening in 2018, has become a green rooftop oasis amid the skyscrapers of SoMa. Or visit the 7-acre Crane Cove Park, which was transformed from a shipbuilding site into one of the city's newest recreation spaces. Opened in the fall of 2020, it comes complete with a lush lawn, a small sandy beach, and structural homages to its former industrial identity.

If you have a whole day to kill and you're feeling ambitious, try following all or part of the newly-minted, 17-mile Crosstown Trail. It slices diagonally through the city, from Candlestick Park all the way to Land's End, hitting secret stairways, residential neighborhoods, and green pockets along the way.

For a classic day trip, you can also drive across the Golden Gate Bridge to Sausalito and rent stand-up paddle boards or kayaks from Sea Trek for $30 an hour. Continue on to Muir Woods National Monument and marvel at the redwood trees. Or head to Tomales Bay to find the Boat Oyster Bar, a reservation-only outdoor cafe open Fridays through Sundays at Hog Island's oyster farm, famous for its barbecued bivalves.

If you need a gentle reentry: Before the dry late summer brings the threat of wildfires to wine country again, hop on the Napa Valley Wine Train. Its full day winery tour, which bypasses the need for a designated driver and includes tastings and a four-course meal, is fully booked weeks in advance and is selling for upwards of $600 in the upcoming peak season.

Or join the city's outdoorsy masses. Watching or running the Bay to Breakers in May might be be a great way to feel the energy of a crowd without the claustrophobia. The 12-kilometer (7.5-mile), century-old race is expected to attract as many as 100,000 spectators watching 50,000 costumed joggers and revelers from the eastern edge of San Francisco to the Pacific Ocean.

If you want to pretend the pandemic never happened: The Golden State Warriors are playing their first-ever playoff season in the brand-new Chase Center, where only unvaccinated people are required to wear masks. Don't know what a 10-second violation is? Come to feed off the energy of 40,000 basketball fans, the $55 bottomless beer buffet at the Modelo Cantina, or an always-changing kaleidoscope of delicacies at La Cocina, which features a rotation of women- and immigrant-owned food businesses.

This is famously a morning-person city--so rather than go out all night, the ultimate party requires waking up for Saturday brunch. The rowdiest (and most fun) option is The Lookout, which features drag and burlesque performances that send cheers echoing throughout the historically gay Castro District.

And don't forget the Outside Lands Music Festival, back at Golden Gate Park this August after a three-year hiatus. Headliners this year include Green Day, Post Malone, and SZA.

Bay Area Rapid Transit, the subway network that connects San Francisco with the rest of the Bay Area, including Oakland and Berkeley, easily gets travelers downtown from San Francisco International Airport in as little as 25 minutes. As of March, overall ridership is still at only 32% of pre-pandemic levels, but weekends are busier than weekdays. Along with the Muni system, which operates buses, cable cars, and trains across a wider radius for commuters, BART now accepts Apple Pay and Google Pay. (Note that masks are still required.)

This being the country's tech hub, there's both a robust bike-sharing network that riders can access through the Lyft app; these days, it's easier to find e-bikes at many stations. They cost an extra few cents a minute but provide a much-needed boost up all those hills.

Of course there's always Uber, Lyft, and traditional cabs. Mask requirements just dropped, but you might want to crack a window to comply with local norms.

Although the city's strict lockdown-era rules are a thing of the past, locals aren't ready to shed their cautious stance entirely. Restaurants and cultural establishments can still ask for vaccination status at the door, and many do. And you'll still see some people sporting face coverings outside and inside by choice--along with some others walking down the street wearing nothing at all. That's San Francisco for you!

Sarah Holder is a CityLab reporter based in Bloomberg's San Francisco bureau.

Print Headline: What it's like to visit San Francisco now