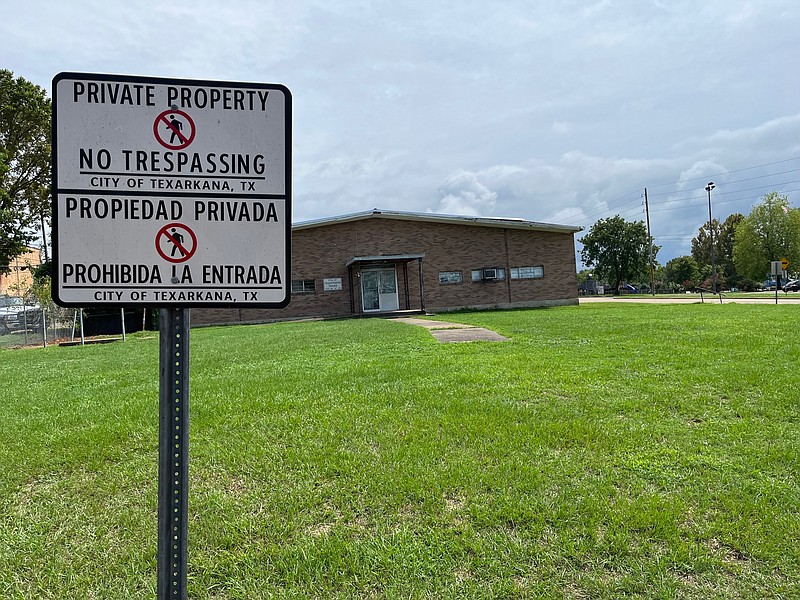 The exterior of the Texarkana, Texas, stray dog kennel is shown Thursday, Aug. 18, 2022, at West Fourth and Oak streets. The building has no signage denoting it as a place where dogs are kept. (Staff photo by James Bright)

TEXARKANA, Texas -- City officials are exploring a number of changes regarding animal control.

The Gazette reported in March on a city-controlled kennel with shoe-polished windows and little information relating to animal control posted on the structure. Not much has changed in the building's appearance, but officials have started to look at new ways to combat the city's stray dog problem.

Assistant City Manager and Public Works Director Dusty Henslee said he hopes in the near future the city will pass a measure in parity with Texarkana, Arkansas' recently approved spay and neuter ordinance.

"Our hope is we will have something before Council in September," he said.

Henslee said mirroring that ordinance is on his agenda, but the timetable for implementation on the Texas side is fluid.

The city also provided the Gazette with three inspections showing the facility was up to state codes. The most recent inspection was performed Dec. 3, 2021.

Public Information Officer Lisa Thompson said the city does have software for tracking the intake and disposition procedure for each canine under city control, addressing previous comments about a lack of tracking and bringing the city into compliance with Title 25 of the Texas Administrative Code.

"There is a system, and we do keep up with animals on case-by-case basis," she said. "It's just that, getting a report out of that system is not as easy as I would have hoped."

Henslee elaborated that the city is working to improve their tracking platform, MyGov.in, over the coming months.

"That is our work order system, and our permit and inspection system, too, and we're going to upgrade where they're at now to where hopefully, not with just this situation right here, but it'll help rectify some reporting, even from our public works standpoint, too," he said.

Not using a system for tracking impoundment and disposition of animals taken by a city violates state Department of Health Services regulations, according to Regional State Public Health Veterinarian Dr. Brent Moore. But if the city is not in compliance with Title 25, there are no vehicles for enforcement, he said.

The city's website still states there is no shelter in Texarkana, Texas, and does not elaborate on the kennel's location, but Henslee said there have been some preliminary talks with Texarkana, Arkansas, on a partnership regarding animal control and impoundment.

"Right now it's still in the topics stage," he said about a potential partnership.

Texarkana, Arkansas, City Manager Jay Ellington said he is sure there will be more discussion in the future, but his initial focus has been on the spay-and-neuter ordinance the city passed Monday.

"We have had some initial discussions on what a partnership may look like," he said.

At the moment, the Texarkana, Arkansas, Animal Care and Adoption Center is full, according to Ellington.

Stray and feral cats are still concerns for the Texas side, which does not take in felines under any circumstances, according to Thompson.

"We do not pick up cats because we do not have a place to keep them," she said. "If we can, we try to get with rescues for some situations, i.e., someone dies with a pet cat."

Thompson said the city is also complying with state euthanasia laws and has one employee who is certified and responsible for humanely putting dogs down. Currently, she said Texarkana, Texas, euthanizes an average of 25 dogs a month.

"I was amazed when I heard how many dogs we take in," Thompson said. "Yes, we're short staffed, but really, even if we were at full staff, we would still have an issue taking care of all the stray dogs we find. And until we really take responsibility as a community and do something about it, it's always going to be an issue. It really is an ownership issue."

Staffing continues to be a problem for the department, too, with only one employee working animal control in addition to other assigned tasks.

Henslee, who started his role as assistant city manager in June, said he was not ready to commit to whether he thinks the city is appropriating enough resources to manage animal control.

"I will say that we are looking at some reorganization within staffing to help with this department, and we are also trying to look at some plans for some improvements of some things," he said.

Moore said there are no state guidelines on how much cities should spend on animal control services.

Those looking for a lost pet or interested in adopting an animal from Texarkana, Texas, should call 903-798-3535.