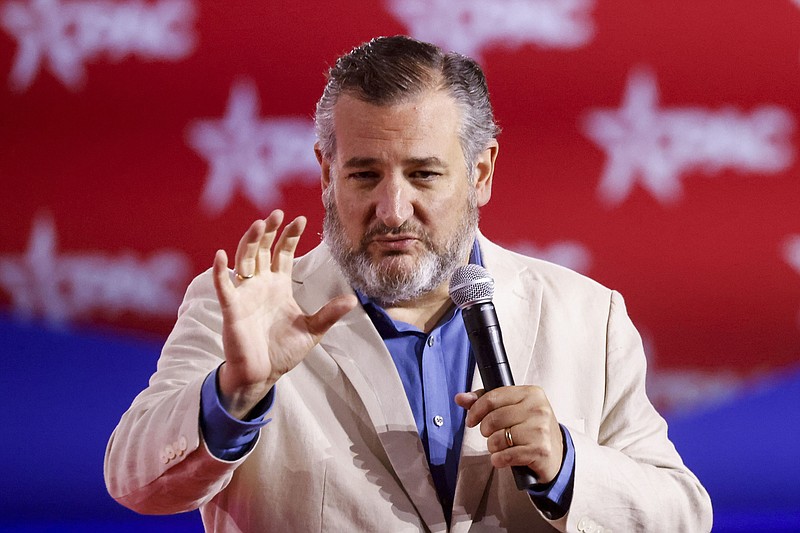 WASHINGTON -- Sen. Ted Cruz made an audition tape for The Simpsons while running for president. He read Green Eggs and Ham during an overnight filibuster, and he peppers speeches with movie references.

But lately his humor has grown more crude, with jests suggesting that Sen. Elizabeth Warren has a penis and that Al Franken, the comic and former senator, is sexually obsessed with him.

Cruz defends his crassness as a good-natured way to lampoon liberal foibles. But while the Texas Republican's provocations make him a fan favorite on the right, critics see mean-spirited humor that spreads transphobia and homophobia in the guise of championing traditional values.

"What is wrong with him?" George Takei, Star Trek's "Sulu" and a vocal gay activist, tweeted after Cruz's comments about Warren.

"Elizabeth Warren told reporters that a guy came up to her and said, `I would have voted for you if only you had a penis,'" Cruz recounted Aug. 13 at a GOP rally in Nevada. "In today's Democrat Party, how do we know she doesn't?"

Suggestions that Warren, a grandmother, is better endowed below the belt than Texas' junior senator quickly proliferated on social media.

So did jabs about Cruz kowtowing to former President Donald Trump after calling him a "pathological liar" during their bitter 2016 rivalry.

Cruz "may think Elizabeth Warren has a penis," tweeted one progressive detractor, "but we all know Donald Trump took Ted's when he emasculated him in public by insulting his wife and claiming his father was involved in the JFK assassination. Trump probably kept it in the safe at Mar-a-Lago and now the FBI has it."

The uproar gained steam days later when Franken guest hosted Jimmy Kimmel Live! The former Saturday Night Live writer overlapped in the Senate with Cruz for five years and resigned his Minnesota seat amid allegations of inappropriate conduct in early 2018.

"I really think that one of the most serious issues facing our country today is just how big a d--- Ted Cruz is," Franken said during his monologue, contending that Cruz's prominence in the Senate stems from the fact that "he's a huge d---."

"Serial groper... & disgraced, unemployed socialist... is now guest hosting on national television and fantasizing about my genitalia. Stop catcalling me, Al. I don't want (to) date you," Cruz responded on Twitter.

That response to Franken's juvenile insult struck Matthew Pressman, a Seton Hall University professor who has studied the rise of vulgarity in political discourse, as remarkable.

"Normally the thing politicians would do is stay above the fray," he said.

But voters "relish that kind of combativeness," he said, adding "there's a much greater tendency today than in the pre-Trump years for politicians to embrace the opportunity to trade vulgar insults" with detractors.

At the Human Rights Campaign, Justin Unga, director of strategic initiatives, asserted that "Sen. Cruz's dangerous anti-LGBTQ propaganda leads to stigma and violence against trans and non-binary people.... Cruz is willing to say or do anything to rile up the most radical segments of his fan base in order to hold on to power."

Cruz's office declined to offer a comment. In the past, the senator has indicated that the vilification he whips up only proves his point.

"What Hollywood says and what the left says on the question of gender, I think has gotten really nutty," he said at a Texas Tribune Festival in September 2020, defending a joke he made after late-night host Trevor Noah satirized "gender reveal" parties.

A smoke bomb at a California party had just sparked a deadly wildfire. Noah said the tragedy could have been avoided if only the parents had delayed telling friends if their newborn would be a boy or girl until "the child is old enough to know their actual gender."

"I was making a joke," he said later.

The jokes dovetail with policy stances that critics view as intrusive and bigoted.

Cruz has argued, for instance, that if transgender individuals are allowed to use public bathrooms that don't match the gender on their birth certificates, that is "opening the door for predators" by allowing "grown men ...into the little girls' bathroom."

At a Tampa event in late July with young conservatives, Cruz said he "celebrates" the left's overreach on gender issues because it awakens voters, "accelerating the country coming back."

But some of his jokes seem gratuitous, such as mocking transgender NCAA champion swimmer Lia Thomas for masculinity akin to that of Olympic star Michael Phelps.

"If you see someone with a beard and chest hair and a voice like Barry White, that's a dude," Cruz told the crowd at the Conservative Political Action Conference in Dallas this month.

At both events, as at campaign rallies around the country ahead of the midterms, he introduced himself by mocking the "woke" practice of declaring one's pronouns to avoid assumptions about gender identity.

"My name is Ted Cruz, and my pronouns are `kiss my ass,' " he said, drawing laughs.

The riff is aimed at tapping discomfort with evolving norms on transgender issues. And with Cruz possibly targeting a second White House run, the crassness could be an appeal to voters who found the most recent Republican president's vulgarity authentic.

"Trump crossed what many people thought were lines of propriety -- on the campaign trail, in his everyday conduct in office -- and it didn't hurt his popularity," Pressman said. "Maybe it contributed to it."

Cruz, son of a preacher, relies on support from religious and cultural conservatives, and he generally avoids foul language.

But he's not averse to alluding to cuss words, which lets him present himself as upstanding while also getting away with saying "nasty and inappropriate stuff," Pressman said.

That's how Cruz has handled the "Let's Go Brandon!" meme -- a thinly veiled way for conservatives to say "F--- Joe Biden!" that began when a sportscaster misinterpreted NASCAR fans' chant after a Brandon Brown victory at Talladega.

At Game 2 of the World Series a few weeks later, Cruz posed with a man holding a sign featuring the phrase and its shorthand translation, "FJB." Cruz is smiling broadly in the photo, which he eagerly shared on social media.

"Find me one person on planet earth who doesn't know what 'Let's Go Brandon' means," he told CPAC in Orlando in February, relishing the thought of Americans hurling an expletive at the president. "That is powerful."