The dish on dishwashers 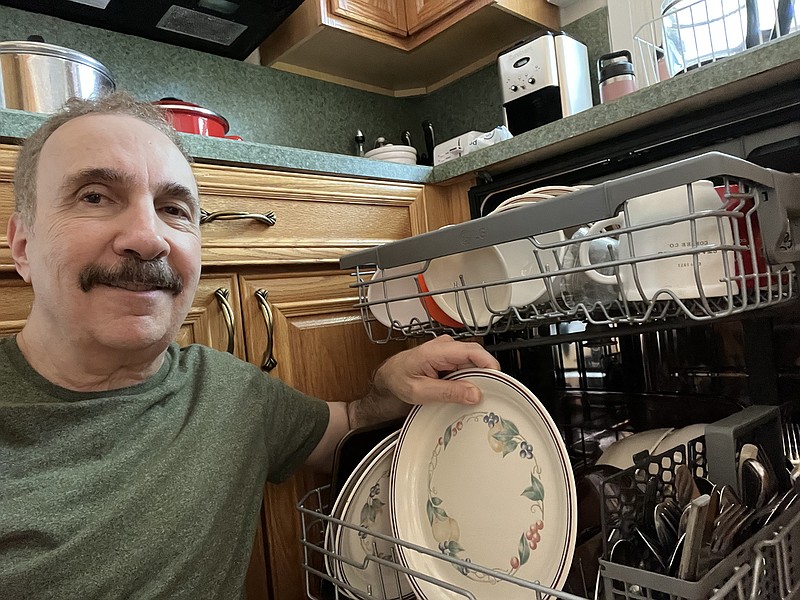 Take it from a man with dishpan hands: One of the great mysteries of the universe doesn't involve flying saucers, though they are frequently spotted with coffee stains and break into tiny pieces if they fly off the kitchen counter.

No, the question that has baffled husbands for decades is this: If you have to wash the dishes before you put them in the dishwasher, why do you need a dishwasher?

The brilliant response, usually from the man's wife, is: "Because."

I may not be the chief cook in our house (my wife, Sue, stands over a hot stove and prepares delicious meals daily, otherwise I would have starved to death long ago), but I am the chief bottle washer.

That's why I accepted the sad fact that we needed a new dishwasher.

Our old dishwasher was without doubt the worst appliance ever made. It leaked so much we had to put a towel in front of it to soak up all the water. I suggested we could increase the value of our house by having an indoor swimming pool, but Sue nixed the idea because she would have to make dinner in scuba gear.

So we went shopping.

Our first stop was a home improvement store where we had bought not one but two refrigerators because both of our old units -- one in the kitchen, the other in a storage area of the garage -- conked out at the same time, probably from double pneumonia.

"Why," I asked Anita, the appliance specialist who sold us the two fridges, "am I supposed to wash the dishes before putting them in the dishwasher?"

"You don't have to," Anita replied, "but you should rinse them off or wipe them off if they still have food on them. Some people don't do that and let them sit in the sink for a couple of days. Then they have to wash them before putting them in the dishwasher."

"I wash the dishes in our house," I said. "And I have dishpan hands."

"Is it true that men don't know how to load the dishwasher properly?" I wanted to know.

"After Jerry puts the dishes in the dishwasher, I have to rearrange them," Sue said.

We thanked Anita and went to an appliance store that was having a sale.

"We don't have any," he said, explaining that white dishwashers aren't in demand anymore. "You'll have to order one. And it costs a lot more than a stainless steel dishwasher, which is now in style."

"But stainless steel won't match the sink and the oven," Sue said.

"We're going to need a new sink," I chimed in, noting that ours is old, white and chipped.

"They don't make sinks in white nowadays, either," Cirilo said.

"And we'll have to replace the faucet, which is old and gold," I went on. "So after this, we might as well get a stainless steel sink and faucet to match the dishwasher."

Sue raised her eyebrows in astonishment and declared, "For once in your life, you make sense."

So we bought a stainless steel dishwasher and called the A-Team -- Anthony (our contractor) and Andy (plumber and handyman extraordinaire) -- to install it.

"Do you guys do the dishes?" I asked.

"My wife does the dishes, but sometimes I load the dishwasher," said Anthony. "And my wife will always say, 'You're not doing it right.' "

After he and Andy removed the old dishwasher, they put in the new one. As he was checking the hose under the sink, Anthony yelled, "Jerry! Quick! Turn off the water!"

I clutched my chest.

There was no flood. And, after a test run, no leakage.

"Make sure Jerry loads it the right way," Anthony told her. "And buy some gloves for his dishpan hands."

Jerry Zezima writes a humor column for Tribune News Service and is the author of six books. His latest is "One for the Ageless: How to Stay Young and Immature Even If You're Really Old." Email: [email protected] Blog: jerryzezima.blogspot.com.

Print Headline: The dish on dishwashers