Breaking down the final six games, can the Dallas Cowboys win out? 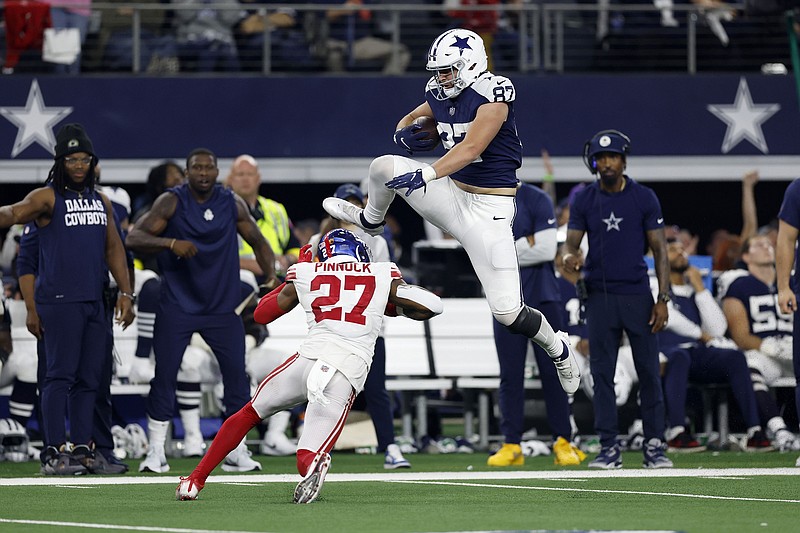 Jake Ferguson (87) of the Dallas Cowboys jumps over Jason Pinnock (27) of the New York Giants during the second half at AT&amp;T Stadium on November 24, 2022, in Arlington, Texas. (Wesley Hitt/Getty Images/TNS)

ARLINGTON, Texas -- That the Dallas Cowboys were discussing end zone celebrations earlier in the week before Thursday's 28-20 victory against the New York Giants speaks volumes about how good this team feels about itself.

The whack-a-mole celebration that set the households across the nation on fire while people were just sitting down to enjoy a piece of sweet potato pie was only given a green light if the Cowboys were up by two touchdowns.

Imagine thinking you are going to be up by two touchdowns against a divisional rival with the same identical 7-3 record as you have and allow four relatively obscure tight ends to pre-plan a celebration. That is proof enough that the Cowboys have it going good.

Just four days after a 40-3 dismantling of the Minnesota Vikings, who have the league's second best record at 9-2 after a 33-26 Thanksgiving Day victory against the New England Patriots, the Cowboys put the whack-a-mole on the Giants.

For the record, the score was 28-13 in the fourth quarter when the celebration occurred, so the rules were followed. And the Giants got a late touchdown in the final seconds to make sure the score was closer than it appears.

No team has had back-to-back dominant victories over a pair of contending teams this season. Although the Cowboys don't have the best record in the NFL, they are playing as well as any team in the league and that includes 10-1 Philadelphia Eagles as well as the 9-2 Kansas City Chiefs and the 9-3 Buffalo Bills, not to mention the Vikings.

Now the Cowboys have a 10-day layoff before resuming play against Indianapolis Colts tonight, beginning a six-game stretch to end the season.

As it stands now, they likely will be favored in every game and the question is can the Cowboys win out and run down the Eagles for the NFC East crown as well as the best record in the NFC.

Well, a lot is left to be decided and the showdown against the Eagles at AT&T Stadium on Christmas Eve will be a key factor.

But there is no question that the Cowboys, who were without quarterback Dak Prescott for five games in September and October, are a team that is peaking at the right time and seemingly getting better.

The team's success has been founded on a defense that tops the NFL in sacks, led by linebacker Micah Parsons, the leading candidate for NFL Defensive Player of the Year who is second in the league with 12 sacks.

Now the offense is doing its part.

The Cowboys totaled 430 yards against the Giants, as they went over 400 yards of total offense for the fourth straight game and the just fourth time all season.

It's not a coincidence.

The Cowboys are 4-1 since Prescott returned in Week 7. They are averaging an NFL-best 33.8 points per game in that time.

That the team is anticipating the return of Pro Bowl left tackle Tyron Smith in December and looking to add free agent receiver Odell Beckham Jr. means there is a chance the Cowboys could get even better.

So how will it shake out?

The Colts are 4-7-1 and have already fired their head coach. The Cowboys will have to stop running back Jonathan Taylor but this should be a win. WIN

This would could turn into a glorified preseason game early. The 1-9-1 Texans are the worst team in NFL and could be firing their head coach for the second straight season. WIN

A third straight game against a team with the losing record should the Cowboys on a five-game winning streak. Jacksonville is 4-7 and have yet to show signs of significant improvement. WIN

This is the showdown everyone has anticipated. Look for Santa Clause to get is work done early so he can watch this one. With quarterback Dak Prescott back in the fold, the Cowboys should come out top and tighten the NFC East race. WIN

This game could be the biggest challenge of the final stretch for the Cowboys as it comes after the emotional game against the Eagles and the suspect run defense faces rushing champ Derrick Henry. LOSS

The season finale could be meaningless as far as the standings are concerned but the Cowboys need momentum heading into the playoffs. They should be playing this game to win. WIN

Print Headline: Breaking down the final six games, can the Dallas Cowboys win out?