Landmark resort reopens as The Boca Raton, a blend of 1920s glamour and 21st century playground 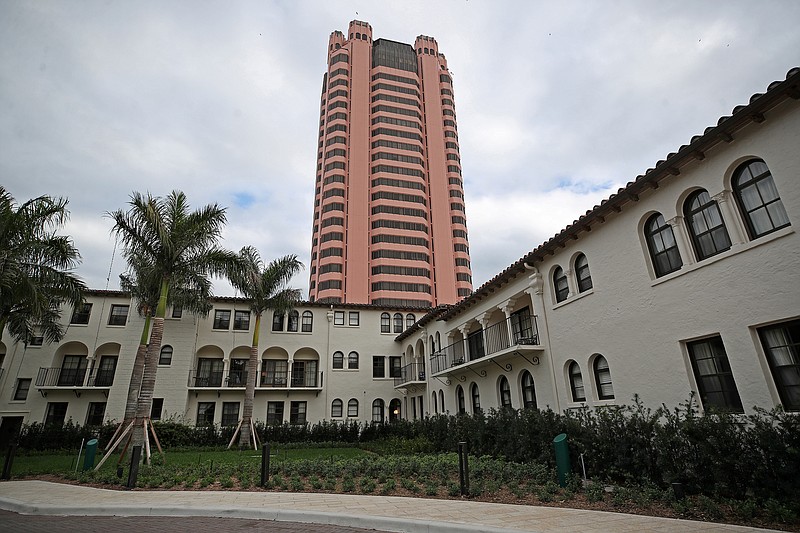 The luxury hotel tower at The Boca Raton on Jan. 3, 2022, in Boca Raton, Florida. The near century-old resort has nearly completed a $200 million renovation. (John McCall/South Florida Sun Sentinel/TNS)

BOCA RATON, Fla. -- It's been nearly a century since the Roaring '20s, but the owners of Boca Raton's fabled resort, now dubbed The Boca Raton, are close to capping a $200 million renovation that pays homage to the life, times and Mediterranean style of architect Addison Mizner, who designed the original circa-1926 resort, but also plays to the city's upswing.

The property, home to a vast suite of hotels and toney restaurants, started entertaining guests over the Christmas holiday after shutting for a yearlong-plus redevelopment that has seen its Great Hall supplanted by a sleek inner sanctum of pools, bars, a waterslide and other aquatic attractions called the Harborside Pool Club.

Management designated Jan. 4 as its formal reopening day. The resort's landmark 27-story tower will reopen on April 1. The tower will serve as the resort's fifth hotel option.

And while other resort buildings have been repainted to revert to their original "coastal sand" color from the Mizner days, the high rise will retain its signature pink.

"The storied architecture of The Boca Raton is a critical aspect of our brand DNA, and a unique point of differentiation," said Daniel A. Hostettler in an emailed response to questions submitted Monday by the South Florida Sun Sentinel.

"We're committed to preserving the past as we lead the property into the future," he added. "In order to do that authentically, we've been working with the Boca Raton Historical Society to ensure that our design plans complement the original vision for the resort."

He said planners "spent countless hours studying the resort's original designs" which were part and parcel of Mizner's architectural vision, based mainly on Mediterranean and Spanish colonial styles.

The overhaul comes at a time when the city of Boca Raton is undergoing a makeover of its own that includes a building boom with high-rise condos and luxury apartments, new shops and restaurants, and eventually a Brightline station for travelers seeking high-speed rail trips to other parts of South Florida and to Orlando.

"It's a huge asset for the city," said Jessica Del Vecchio, the city's economic development manager, who added that the resort and its storied history can be a bit of a calling card. "A technology company moved here from California. They wanted to know more about the resort."

As if on cue for the opening, Bloomberg listed the city as one of 25 top leisure destinations worldwide for 2022. It equated the city with such places as Doha, the capital of Qatar; Vienna, Austria; the Galapagos Islands off Ecuador and Italy's Amalfi Coast.

Reviewers specifically called out The Boca Raton as its city's "Exhibit A."

"Is it a retirement haven or an extension of Miami's party scene?" the article asked. "Boca Raton is looking more like the latter these days, luring a younger, permanent crowd during the pandemic and spurring the development of dinner spots that don't trade in early-bird specials."

The resort, the article says, is a place "where membership has risen among fortysomething professionals with kids."

Between 2009 and last year, the resort was affiliated with the Waldorf Astoria. But the ties were cut after the new owners, MSD Partners of Santa Monica, Calif., an investment group led by computer mogul Michael Dell, elected to create their own independent brand.

So they reverted to the name used by 1940s-era owners J. Myer Schine and his socialite wife, Hildegarde. It was Mrs. Schine's affinity for the color pink that led to the hotel being painted that color.

But only club members and resort guests will get to use them.

The majority of the visitors are from the Northeast, "including multi-generational families looking for sun and beach," Hostettler said.

Many are couples who prefer a stay at the resort's new luxury Yacht Club. "We also have many guests from the Midwest who drive down for extended lengths of stay," he said.

On Dec. 1, the resort unveiled the MB Supper Club, a nod to the golden age of supper clubs in the 1930s and 1940s, when high society frequented coveted establishments for dinner and a show, the resort said last month.

The club is a tribute to the former Monkey Bar, a cocktail lounge dedicated to Mizner, an animal lover who owned a monkey named Johnnie Brown. The restaurant now sports gold monkey sconces, as well as whimsical-looking creatures appearing to romp on red wallpaper.

Hostettler said the resort unveiled the Cloister hotel at the end of December, "which serves as the heart of Harborside" and offers several new dining concepts.

They include Sadelle's in partnership with Major Food Group, and Palm Court cocktail lounge, in addition to a redesign of the wellness venue Spa Palmera.

Timeline: On approach to a century

1926: The resort opens as The Cloister Inn

1927: Sells at auction to Clarence Geist, a golf enthusiast and utilities magnate from Philadelphia, after money troubles arise from bottoming of the Florida land boom

1930: Reopens as The Boca Raton Club as Geist's "winter club" from January to March for members

1942 -- 1944: U.S. Army buys and occupies the club to house its Air Corps trainees, becoming a training ground and barracks for thousands of troops

1944: Hotelier J. Myer Schine and his socialite wife, Hildegarde, acquire the hotel and change the name from The Boca Raton Club to The Boca Raton. Mrs. Schine's affinity for the color pink led to the hotel's being painted that color.

1969: Tower is built; the Golf Villas, now the Bungalows, are completed.

1980: Boca Beach Club opens; 212 guestrooms and a half mile of private beach, with transportation provided aboard a 44-foot pink yacht, "Mizner's Dream."

2019: MSD Partners, headed by computer entrepreneur Michal Dell of California, purchases the property an embarks on a $200 million redevelopment. 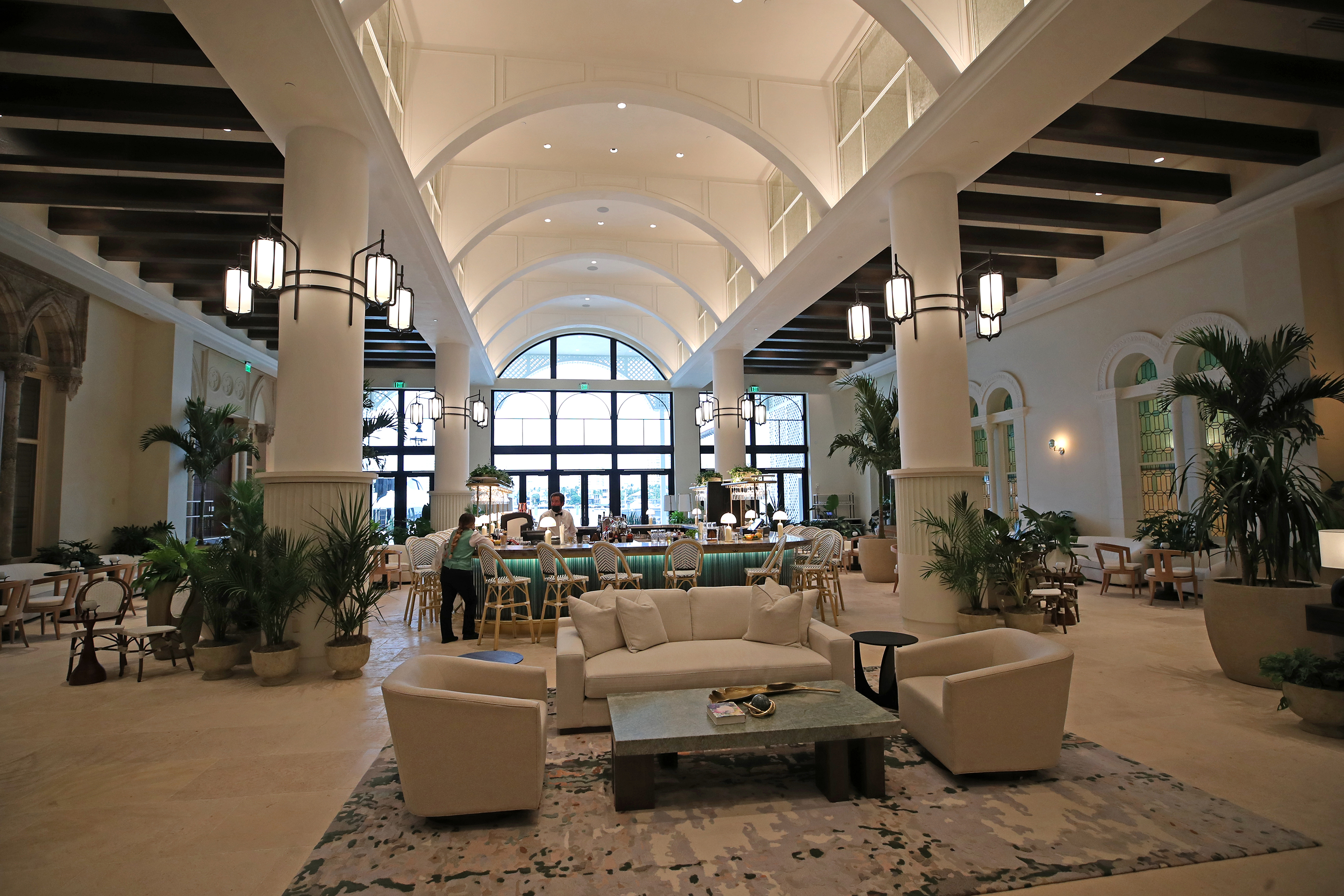 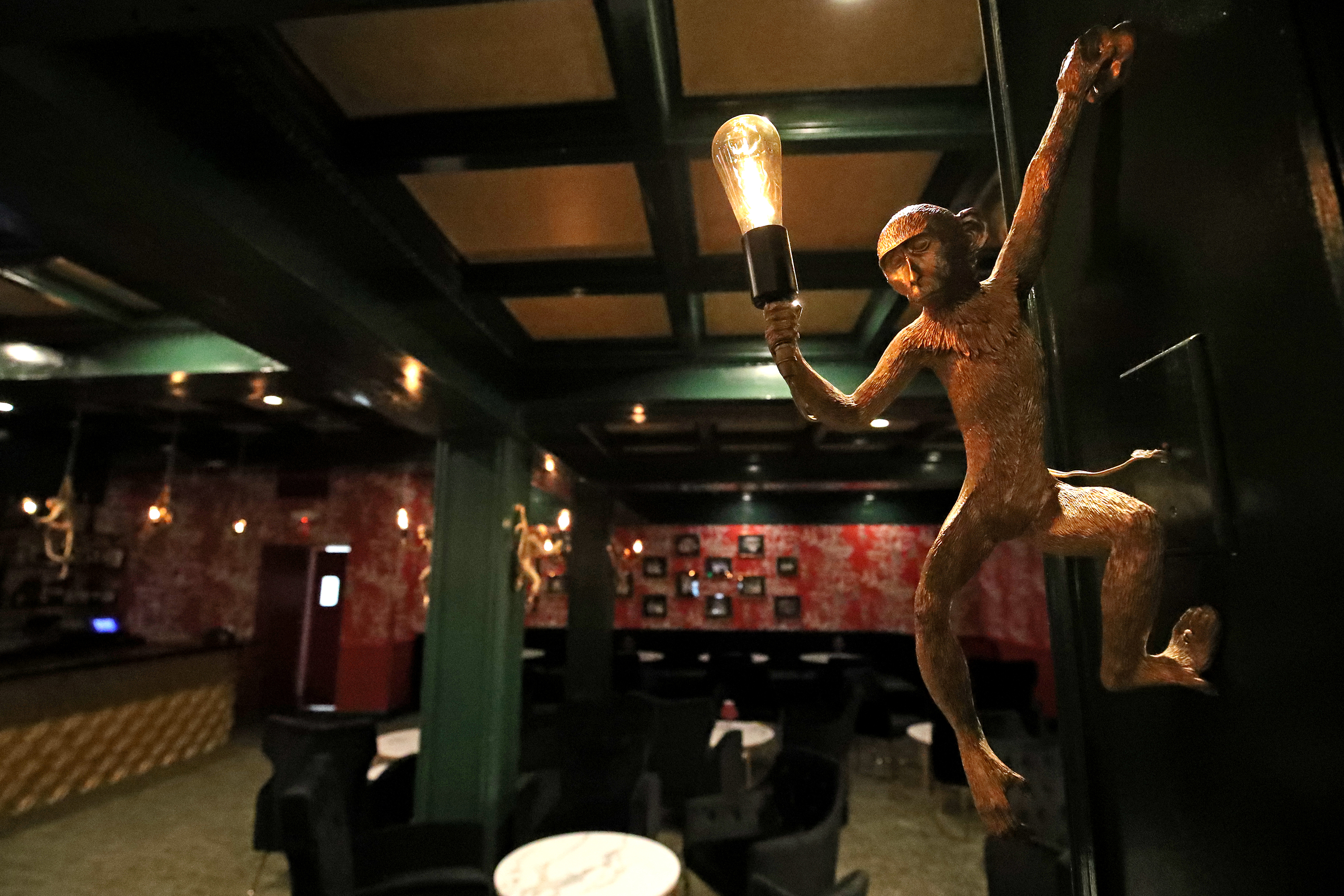 A dancing monkey is depicted on a romp at the MB Supper Club at The Boca Raton on Jan. 3, 2022. Resort architect Addison Mizner, known for his fondness for animals, owned a monkey named Johnnie Brown in the 1920s. (John McCall/South Florida Sun Sentinel/TNS)