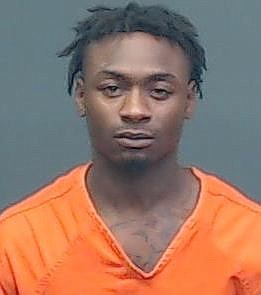 TEXARKANA, Arkansas -- A theft charge has been filed in Miller County against a Texarkana man who allegedly led officers on a high-speed chase from Hope, Arkansas, into Texarkana, Texas, in December.

Rodrick O'neal Vann Jr., 24, was allegedly one of multiple men who fled the scene of an attempted ATM break-in at Bank of the Ozarks in Hope in the early hours of Dec. 17, according to a probable cause affidavit. Officers with the Hope Police Department responded to a call at the bank at 600 South Main Street at 4:43 a.m.

"The caller advised there were four males in a maroon flatbed pickup truck actively attempting to break into the ATM," the affidavit states.

Officers attempted to stop the maroon, 1992 Ford F-250 as it left the area of the ATM. Instead of pulling over, the driver disobeyed traffic lights and a pursuit wound through Hope and continued as the truck entered the westbound lane of Interstate 30.

The truck allegedly traveled toward Texarkana at speeds over 100 miles per hour with a chain dragging behind. Arkansas State Police took over the pursuit as the truck entered Texarkana, Arkansas, and traveled onto Highway 59 in Texarkana, Texas.

Trooper Dale Young used a "Precision Immobilization Technique" or P.I.T. to stop the fleeing truck. A P.I.T. involves bumping the rear of a fleeing vehicle in a manner that causes it to spin and come to a halt.

Two men reportedly fled after the truck came to a stop. Texarkana, Arkansas, Officer Tanner Freeman and his police canine were able to track one of the men who was identified later as Vann.

The maroon truck was determined to have been stolen earlier the same morning from an industrial services company in Horatio, Arkansas.

Vann has been held in the Bowie County, Texas, jail since his arrest Dec. 17. Records show he was booked on a misdemeanor charge of evading arrest which is still pending. Court records show Vann entered a plea of not guilty to the charge Friday at a hearing before County Court at Law Judge Craig Henry.

Records show that holds for fleeing and breaking and entering were placed on Vann for Hope police at the time of his arrest in December. Vann was free on bonds totaling $5,000 for misdemeanor charges of assault and possession of marijuana when he was taken into custody in December. The assault and marijuana charges stem from an arrest by Texarkana, Texas, police in October.

He is scheduled to appear before Henry on those charges later this month.

A warrant for felony theft by receiving has been issued for Vann in Miller County.