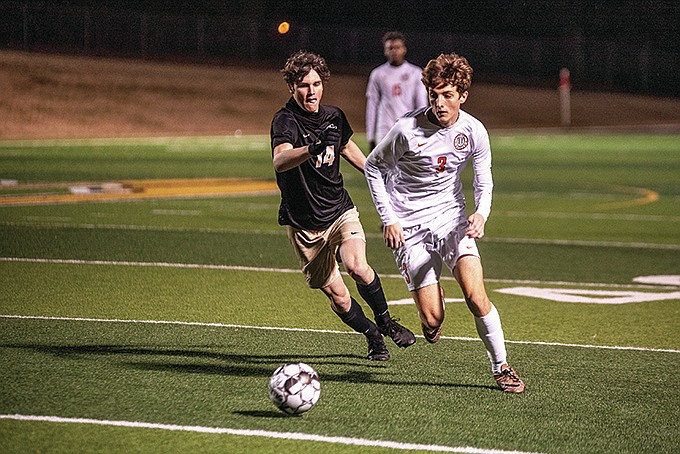 TEXARKANA, Texas -- The Pleasant Grove and Texas High School boys soccer teams are set to clash in a rivalry matchup at Grim Stadium at 7:15 p.m.

Texas High (6-0) and PG (2-2) are both nearing the end of their non-district schedules and are looking forward to the challenge of facing each other to get prepared for junior district play.

While they may be in new positions, both coaches have become very familiar with the importance of this rivalry.

"This has been the most talked about game since the moment I stepped onto this campus. And honestly, I'm just as excited as (the players) are," Henry said. "The kids play with each other in their club teams, so it's kind of just bragging rights for the year.

"And it's always a good contest for us to play a bigger school that obviously has a bigger population of kids to choose from. It's going to be a good challenge for us. And who wouldn't want to beat the crosstown rivals?"

McCarthy said this game just means more due to the relationships between the players on both teams.

"I think it's exciting because all these kids grew up with each other," he said. "This is a chance for them to represent their school, and it brings a lot of school spirit and pride. So any time that is shown, it's a great thing. Every year, it's one of the exciting things for the soccer community here."

After losing a good group of seniors from last season, Henry said the Hawks' new group of veterans has stepped up to the plate.

"We have a great group of seniors this year," she said. "They've bought into everything that we've been implementing. The quality is there, and now we're just working on the culture part and getting these kids to believe that they are capable winners."

Henry said her team is going to have to be fundamentally sound and versatile when it comes to their formations, but she is confident in their talent level.

McCarthy's squad has a ton of veteran leadership, as the team is mostly made up of juniors and seniors. He said it will be important to keep up with PG's pace in this game because they are a team that is always in great shape.

"I'm looking for us to execute our game to a higher standard," he said. "It's an important game because it's a rivalry game, but in my eyes we're still preparing for the main dish, which is district play. We want to succeed in district play and right the wrongs of last year.

"So, I want to see us improve on the things we've been practicing and implement tactical things at a higher standard than what we've already been doing. Each game, we should be getting a little bit better than how we were in the last game."

The junior varsity game, originally scheduled to be played prior to this game, was canceled.