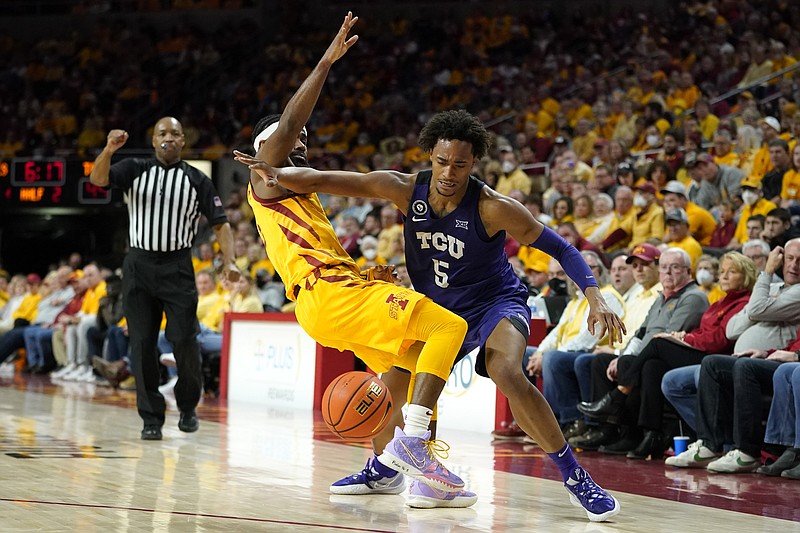 For the Horned Frogs, winning eased the disappointment of a 57-56 defeat at Oklahoma State three days earlier.

"I just loved how we handled the preparation after a devastating loss," TCU coach Jamie Dixon said. "But it wasn't devastating. It got us better."

Iowa State (14-5, 2-5) struggled to get anything going offensively, hitting just 31% of its shots and committing 11 turnovers.

Izaiah Brockington led the Cyclones with 19 points and 12 rebounds, marking his seven double-double of the season.

"That's not an acceptable effort," Iowa State coach T.J. Otzelberger said. "Not at any point and time, based on the way we work in our program."

"That was probably our best chance," Brockington said of a possible Cyclone comeback. "But we can't dig ourselves a hole like that in the first place."

TCU hit just two of its first nine shots but ended the slump with 3-pointers by Emanuel Miller and Baugh.

The Horned Frogs put together an 11-4 run and built a 15-8 lead. The margin grew to 34-23 by halftime, with Baugh closing out the period with a jumper.

"He's getting better and better," Dixon said of Baugh. "The shooting is really the only thing that's not great right now. But he's a great defender has great energy. He's a leader."

Iowa State came into Saturday needing a win to steady its NCAA Tournament hopes after losing four of six games following a 12-0 start. TCU's previous three games were decided by a total of 5 points.