Boston up to 12 straight double-doubles for No. 1 Gamecocks 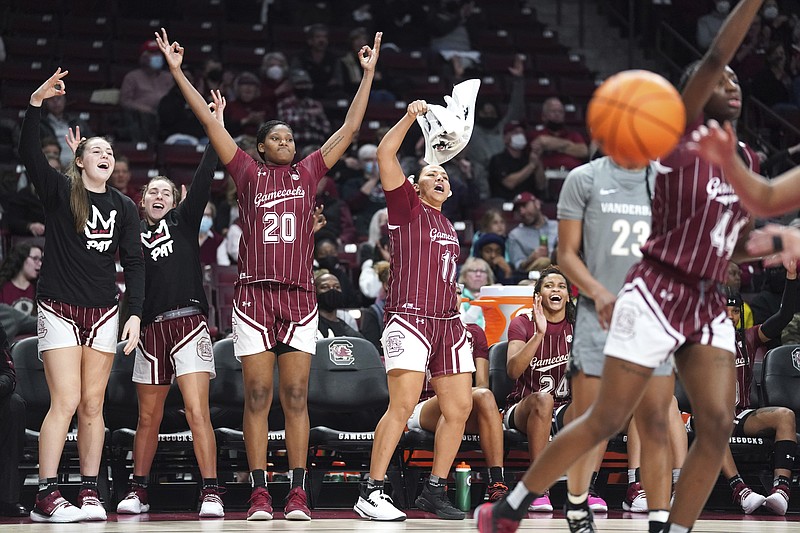 COLUMBIA, S.C. -- LeLe Grissett scored a season-high 14 points, Aliyah Boston is up to 12 straight games with a double-double, and No. 1 South Carolina got its 14th consecutive win over Vanderbilt in a 85-30 victory Monday night.

Grissett, a fifth-year senior, made her first start of the season in place of injured Zia Cooke and made a quick impact for the Gamecocks (18-1, 6-1 Southeastern Conference). Boston finished with 11 points, 12 rebounds, four assists, four steals and two blocks.

Brinae Alexander had 10 points to lead the Commodores (10-10, 1-5), who were held to their lowest point total of the season.

Behind Grissett's seven first-quarter points, South Carolina led 19-8 after 10 minutes and 42-15 by halftime.

The only drama on Monday was whether Boston, the 6-foot-5 All-American who had just six points and four rebounds at the break, would continue her dominating run.

ANN ARBOR, Mich. -- Naz Hillmon scored 32 points and had 12 rebounds, and No. 7 Michigan dominated Purdue in the paint for the win.

The Wolverines took control of the game a little more than halfway through the first quarter and never relinquished it, leading Purdue by as much as 17.

Rickie Woltman was the leading scorer for the Boilermakers (12-7, 3-5) with 11 points. She also had a team-high seven rebounds.

Purdue's Jeanae Terry made a jumper with just under eight minutes left in the third quarter to cut Michigan's lead to 40-38. The Wolverines responded quickly, with Kiser making a layup, but Purdue drew within two points again about a minute later with a layup from Woltman.

Maddie Nolan then hit a pair of 3-pointers in quick succession, effectively halting the Boilermakers' momentum.

PROVO, Utah -- Shaylee Gonzales scored 20 points, Lauren Gustin had 10 points and 13 rebounds, and No. 16 BYU beat San Diego for its second victory over the Toreros in two days.

Gonzales scored 29 points in BYU's 74-63 victory over San Diego on Saturday. She was 7 of 14 from the floor with five rebounds and five assists in the rematch.

Gonzales and Harding combined to score 10 points during BYU's game-opening 10-0 run, and Gustin scored 10 of the Cougars' opening 14 points of the second quarter to build a double-digit lead they would not give up.

BYU pulled away with another 10-0 run at the start of the third quarter, with five points from Gonzales.

The teams combined for 43 turnovers.

Print Headline: Boston up to 12 straight double-doubles for No. 1 Gamecocks