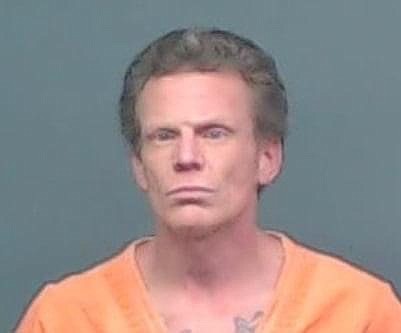 TEXARKANA, Texas -- A man has been arrested for allegedly breaking into a car wash by entering through a hole in the roof.

When the suspect refused to come down off the roof after police arrived, the Texarkana Texas Fire Department responded with a ladder truck to get him down.

Wayde Land, 37, was arrested on charges of burglary of a building and possession of a controlled substance. His bail for the two charges was set at $25,000, according to the Texarkana Texas Police Department.

Land was arrested early Saturday after police received an alarm call at 4:15 a.m. Saturday at the Baywash Car Wash in the 4200 block of North State Line Avenue. While checking the property, they heard movement coming from up on the roof. When Land allegedly refused to come down on his own, police called the Texarkana Texas Fire Department, who brought out a ladder truck that officers used to climb up and take Land into custody.

Land had allegedly used a grinder saw to cut a hole in the roof that was just big enough for him to slip through and get inside the building. Once he got in, he allegedly loaded up several tools he found and also broke into one of the vending machines on the wall too.

Land was booked into the Bi-State Jail and charged with Burglary of a Building and Possession of a Controlled Substance. His total bond for the two charges was set at $25,000.