Hornets' 158 points season-high in NBA, most for franchise 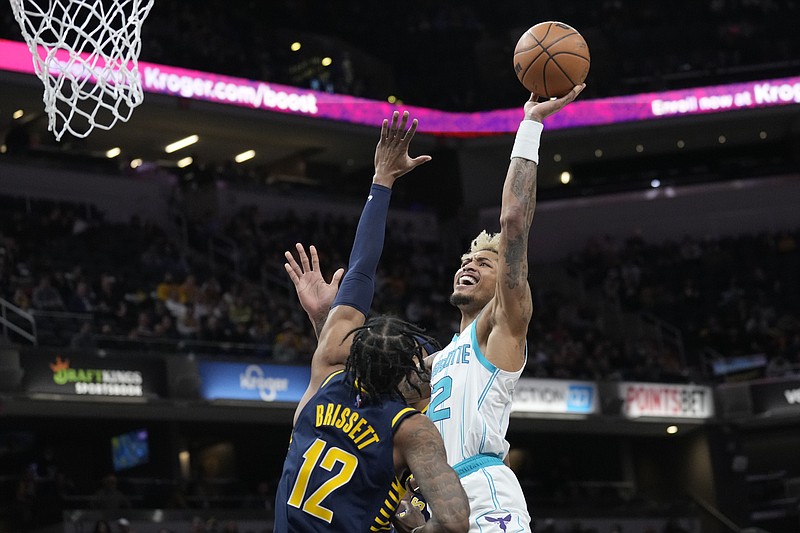 INDIANAPOLIS -- The Charlotte Hornets broke the franchise's single-game scoring record on Wednesday night and notched the highest point total in the NBA this season in their 158-126 rout of the Indiana Pacers.

Kelly Oubre Jr. had a career-high 39 points, going 10 of 15 on 3s -- also a career best. LaMelo Ball had his fourth triple double of the season with 29 points, 13 assists and 10 rebounds. Four players had 20 or more points, and the Hornets matched a season-best by making 24 3s.

With the victory, Charlotte snapped a two-game losing streak and pulled off a four-game sweep of the injury-depleted Pacers.

Indiana was led by Goga Bitdaze and rookie Isaiah Jackson, who both scored 17 points. The Pacers have lost three in a row and seven of nine.

The Cavs made 19 3-pointers, won for the eighth time in nine games and leap-frogged Milwaukee in the Eastern Conference standings. Darius Garland scored 19 and rookie Evan Mobley had 16 for the Cavs.

Giannis Antetokounmpo scored 26 points after missing a game with knee soreness, but had seven of Milwaukee's 19 turnovers that led to 31 points for Cleveland. Bobby Portis added 22 points and Khris Middleton 21 for the Bucks.

The Clippers were down by maximum of 14 points on Wednesday, and trailed by two to start the fourth quarter, in which they outscored the Magic 35-24.

Will Barton had 21 points and 10 rebounds and DeMarcus Cousins chipped in 13 points off the bench for the Nuggets.

The Nets were playing without All-Star guard James Harden, who got the night off to rest an ailing left hamstring a day after playing 38 minutes in Tuesday's loss against the Los Angeles Lakers.

ATLANTA -- Bogdan Bogdanovic scored 18 points in his return from a knee injury, Onyeka Okongwu also scored 18 off the bench and Atlanta recovered from a slow start to beat Sacramento.

The Hawks relied on their backups for their fifth consecutive win. Atlanta's bench outscored Sacramento's backups 70-24, including a 41-11 advantage in the first half. Harrison Barnes led Sacramento with 28 points.

The Kings suffered their fifth consecutive loss overall and 10th straight on the road.

Trae Young scored 17 points with 10 assists for Atlanta, which led 67-50 at halftime after trailing by 14 in the first quarter.

Chicago opened the game on a 14-2 run and didn't miss a field goal attempt through the first six minutes. The Bulls finished the first quarter shooting 66.7% from the floor.

Jimmy Butler added 22 points, Tyler Herro scored 21 and P.J. Tucker had 20 for the Eastern Division-leading Heat, who have won eight of 10.

Miami never trailed and maintained a double-digit advantage after outscoring New York 30-16 in the first quarter. Dewayne Dedmon's two free throws late in the third quarter gave the Heat their largest lead at 88-58.

Although he was limited to six points, Bam Adebayo had 11 assists and eight rebounds for Miami, which won its sixth straight at home against New York.

Print Headline: Hornets' 158 points season-high in NBA, most for franchise