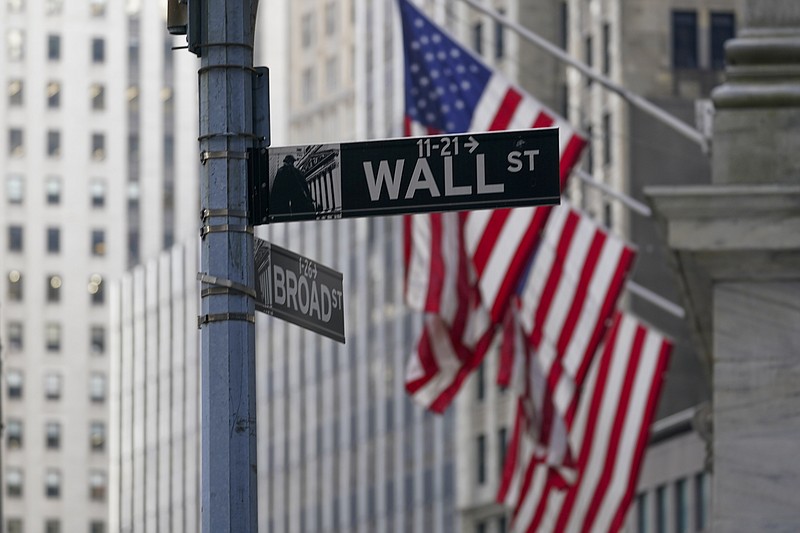 An early rally on Wall Street gave way to a broad slide for stocks and a surge in bond yields Wednesday after the Federal Reserve signaled it plans to begin raising interest rates "soon" to fight a spike in inflation that the central bank says is probably getting worse.

The S&P 500 fell 0.1% after having been up 2.2% earlier in the day. The Dow Jones Industrial Average fell 0.4% after swinging more than 900 points from its high for the day. The Nasdaq ended little changed, shedding most of a 3.4% gain.

Bond yields rose, including the yield on the 10-year Treasury note, which climbed to 1.87% from 1.78% late Tuesday. Yields affect rates on mortgages and other consumer loans.

In a statement issued after its latest policy meeting, the Fed said it "expects it will soon be appropriate" to raise rates. Investors expect the first in a series of rate hikes to happen in March. The Fed also said it would phase out its monthly bond purchases, which have been intended to lower longer-term rates, in March.

The major stock indexes initially rose after the 2 p.m. Eastern release of the Fed statement, but shed most of their gains as Fed Chair Jerome Powell took repeated questions about how and when the central bank will start letting its balance sheet shrink after buying trillions of dollars of bonds through the pandemic. A reduction in the central bank's balance sheet would have a similar effect as additional rate increases.

The selling accelerated as Powell acknowledged that the high inflation that has squeezed businesses and consumers isn't getting better, which could force the Fed to get even more aggressive about raising interest rates and removing the support it put in place for markets.

"Since the December meeting, I'd say the inflation situation is about the same but probably slightly worse," he said. "It hasn't gotten better. It's probably gotten just a bit worse, and that's been the pattern."

Powell also said that there's room to raise interest rates without hurting the labor market, and wouldn't rule out the possibility that the Fed could raise short-term rates at any of its seven remaining meetings this year or opt for a larger-than-usual increase at any one of them.

Those comments sent a signal to Wall Street that the Fed may be more hawkish when it comes to tackling inflation, said Willie Delwiche, investment strategist at All Star Charts.

"In the market's mind, that's more rate hikes, and while he was clear to say that the economy is strong enough to handle those rate hikes, from a strictly (stock) market perspective, higher rates weigh on expensive stocks," Delwiche said.

For nearly two years, investors had poured money into stocks, confident that the Federal Reserve would help keep share prices upright. With that support going away, markets have been hit with a bout of volatility. The S&P 500 has fallen 9.3% after closing at an all-time high on Jan 3.

Markets have been on edge since early January when minutes released from the Fed's December meeting suggested policymakers may be more zealous about fighting inflation through higher interest rates than many had been expecting.

It was at the December meeting that the Fed said it was likely to be quicker than in the past to reduce its huge holdings of bonds it had bought up through the pandemic to keep longer-term interest rates low. A balance sheet reduction would also put upward pressure on interest rates.

Powell said Wednesday that policy makers have not set a timetable for when the Fed will start reducing its balance sheet and that the Fed sees short-term rates as the main lever it will use to adjust monetary policy. But he also acknowledged that the balance sheet is "substantially larger" than it needs to be and that the economy no longer needs to have such highly supportive action. That could lead the Fed to move sooner and faster in shrinking its balance sheet.

The last time the Fed was raising rates and shrinking its balance sheet at the same time was in late 2018. The S&P 500 lost nearly 20%.

"Chair Powell seems more confident than the market that the labor market can tolerate a number of rate hikes this year," said Brian Jacobsen, senior investment strategist at Allspring Global Investments. "The market has voted that he's been tone deaf to some of the lingering economic problems."