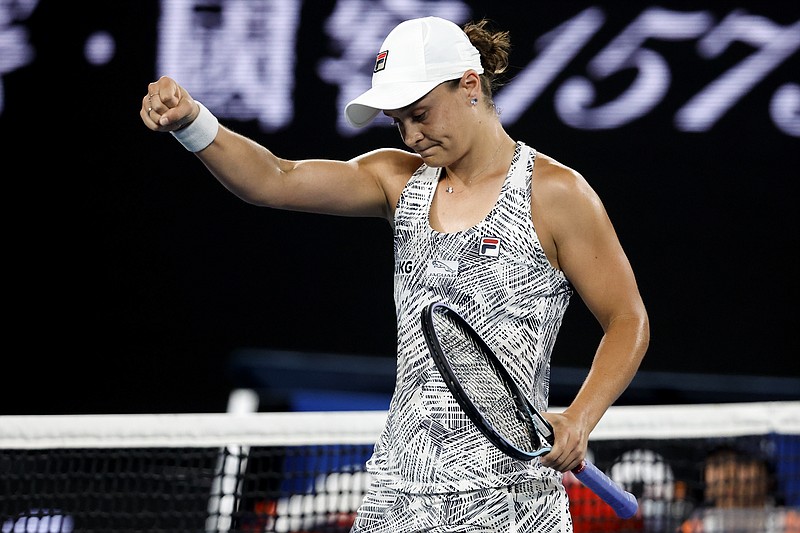 Ash Barty of Australia reacts after defeating Madison Keys of the U.S. in their semifinal match at the Australian Open tennis championships in Melbourne, Australia, Thursday, Jan. 27, 2022. (AP Photo/Hamish Blair)

MELBOURNE, Australia -- Ash Barty was the crowd favorite at Melbourne Park long before she ended a 42-year drought by reaching the Australian Open final.

Danielle Collins said it'll be "spectacular" to take on the women's No. 1-ranked player in the final of her home Grand Slam event on Saturday.

The 28-year-old American got a little taste of what to expect in her first Grand Slam final as she left the court on Thursday following her 6-4, 6-1 semifinal win over seventh-seeded Iga Swiatek.

Barty beat Madison Keys 6-1, 6-3 in 62 minutes in the first of the semifinals, and Collins wrapped up the night by beating 2020 French Open champion Swiatek in 78 minutes.

Predictably, there were boos after Collins finished her on-court TV interview. Not too loud or long, but an indication of things to come nonetheless.

Barty won her first major title on clay at Roland Garros in 2019 and her second on grass at Wimbledon last year. Now that she's become the first Australian woman into the final here since Wendy Turnbull in 1980, Barty has a good chance to claim her first on a hard court. She's only too aware, though, that no Australian woman since Chris O'Neil in 1978 has won the singles title here.

"As an Aussie, we're exceptionally spoiled we get to play in our own backyard," the 25-year-old Barty said. "Now we have a chance to play for a title. It's unreal."

Barty lost to eventual champion Sofia Kenin in 2020 the last time she reached the Australian Open semifinals. She said she's learned from that kind of pressure as much as winning other Grand Slams.

"Absolutely embrace it," she said of the home expectations. "You have to. It's fun. It's brilliant to be playing in the business end of your home Slam. I'm not gonna lie about that -- it's amazing."

Keys is just the latest in a line of rivals to explain how she had few answers to Barty's slice backhand and wide variety of serves.

Barty hit 20 winners to only eight for Keys, who was playing in the Australian Open semifinals for the first time since 2015. She lost that year to eventual champion Serena Williams, who was the last No. 1 seed to win the women's title at Melbourne Park.

Barty converted four of her six break-point opportunities and saved the only two break points she faced on her serve against the 2017 U.S. Open champion runner-up. In six matches so far at the tournament, she has dropped one service game.

The 27th-seeded Collins relies on a power game and imposes a relentless energy on every contest.

Her forehand cross-court winner to set up her first match points was typical of her semifinal form. She hit 27 winners and had only 13 unforced errors. She opened each set with a break of serve and raced to 4-0 leads both times.

Collins delayed her professional career by playing in the U.S. college system, and said it gave her a good grounding in handling what she calls "adverse" crowds.

Playing in empty stadiums during the COVID-19 pandemic has given her an appreciation of crowds, whether the fans support her, are against her or are neutral.

"That's something that I really thrive in, whether I have a full crowd going for me or whether I have the opposite," she said. "I really just love the energy. I'm just really excited to go out there and compete.

"I realize that there is going to be a lot of people supporting Ash. It's all in good spirit."

Collins' run to the semifinals in 2019 was her best previous result at a Grand Slam tournament. After undergoing surgery last year to treat endometriosis, she's in less pain and said she's in better shape to win.

Keys was on a career-best 10-match winning streak ahead of the semifinals, including a run to the title in a tune-up tournament in Adelaide -- her first WTA title since 2019. Her full tally of 11 match wins this month already equals her total for 2021, when she dropped into the 50s in the rankings. She's expected to return to the top 30 next week.

The stadium was limited to two-thirds capacity, with the state government allowing an increase from the earlier 50% restriction on ticketed courts late this week as part of the easing of rules in place for the COVID-19 pandemic.

Most of the support in the first match, obviously, was for Barty. Chants of "Let's go Barty, Let's go!" -- combined with coordinated clapping -- were regular at each changeover, with pockets of fans wearing the yellow shirt synonymous with the Australian player scattered around arena. Rod Laver, the aging Australian tennis great, was in the stadium himself.

While Barty is one win away from giving the host nation a title, there's a guaranteed win in another competition.

Nick Kyrgios and Thanasi Kokkinakis, dubbed "Special K," ensured an all-Australian men's doubles final with 7-6 (4), 6-4 win over third-seeded Marcel Granollers and Horacio Zeballos in a nearly full Rod Laver Arena. Fans were allowed into the main stadium with grounds passes during the day session and didn't need stadium tickets for the afternoon session.

Also on Day 11, Dylan Alcott's farewell tournament ended with a loss in the wheelchair quad final to Sam Schroder of the Netherlands.

Alcott was named Australian of the Year at celebrations for the national day and attended a ceremony in the capital of Canberra between his win in the semifinals and the final.

After her win, Barty paid tribute: "He's inspired a nation ... I couldn't be more proud of him." 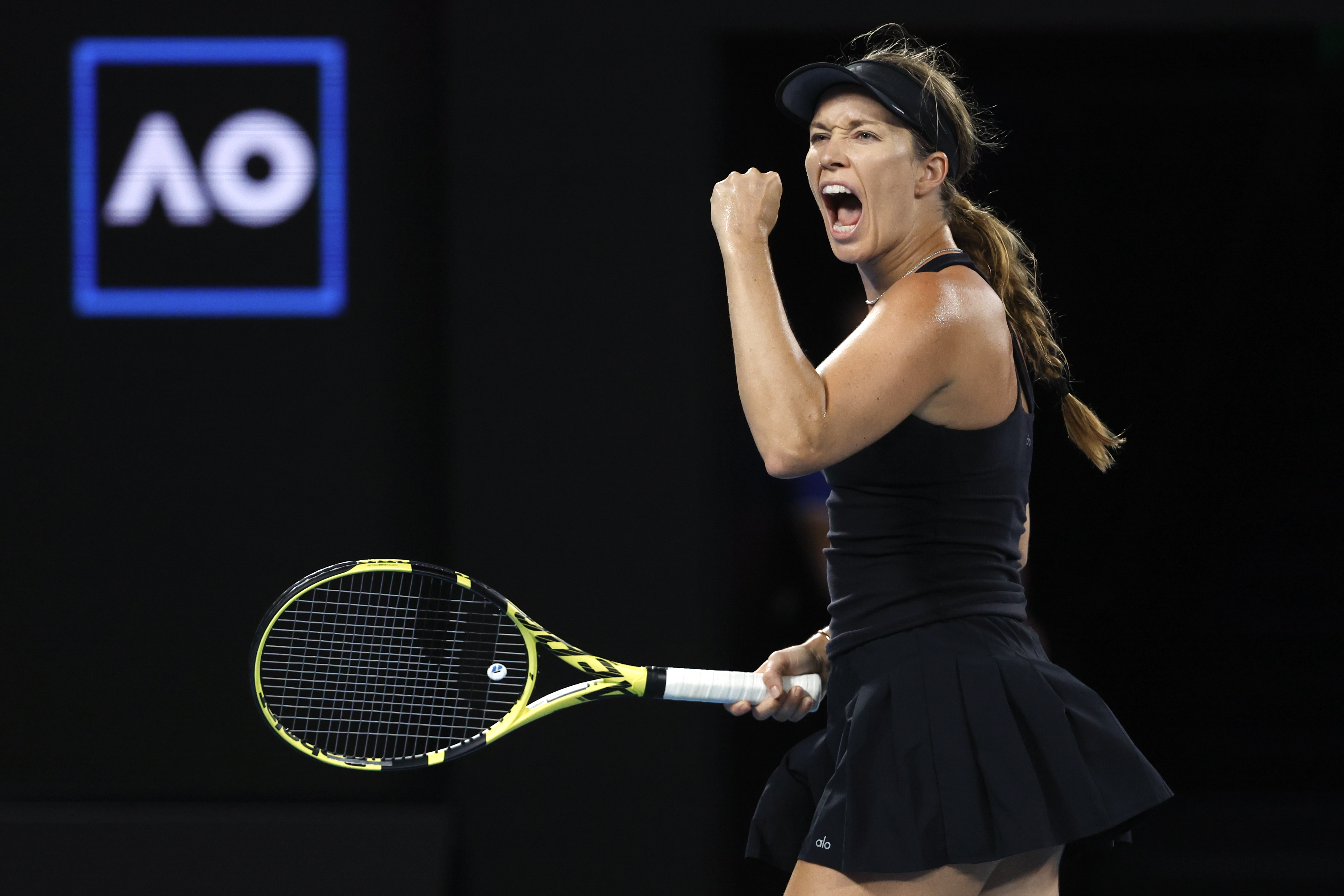 Danielle Collins of the U.S. reacts after winning a point against Iga Swiatek of Poland during their semifinal match at the Australian Open tennis championships in Melbourne, Australia, Thursday, Jan. 27, 2022. (AP Photo/Hamish Blair) 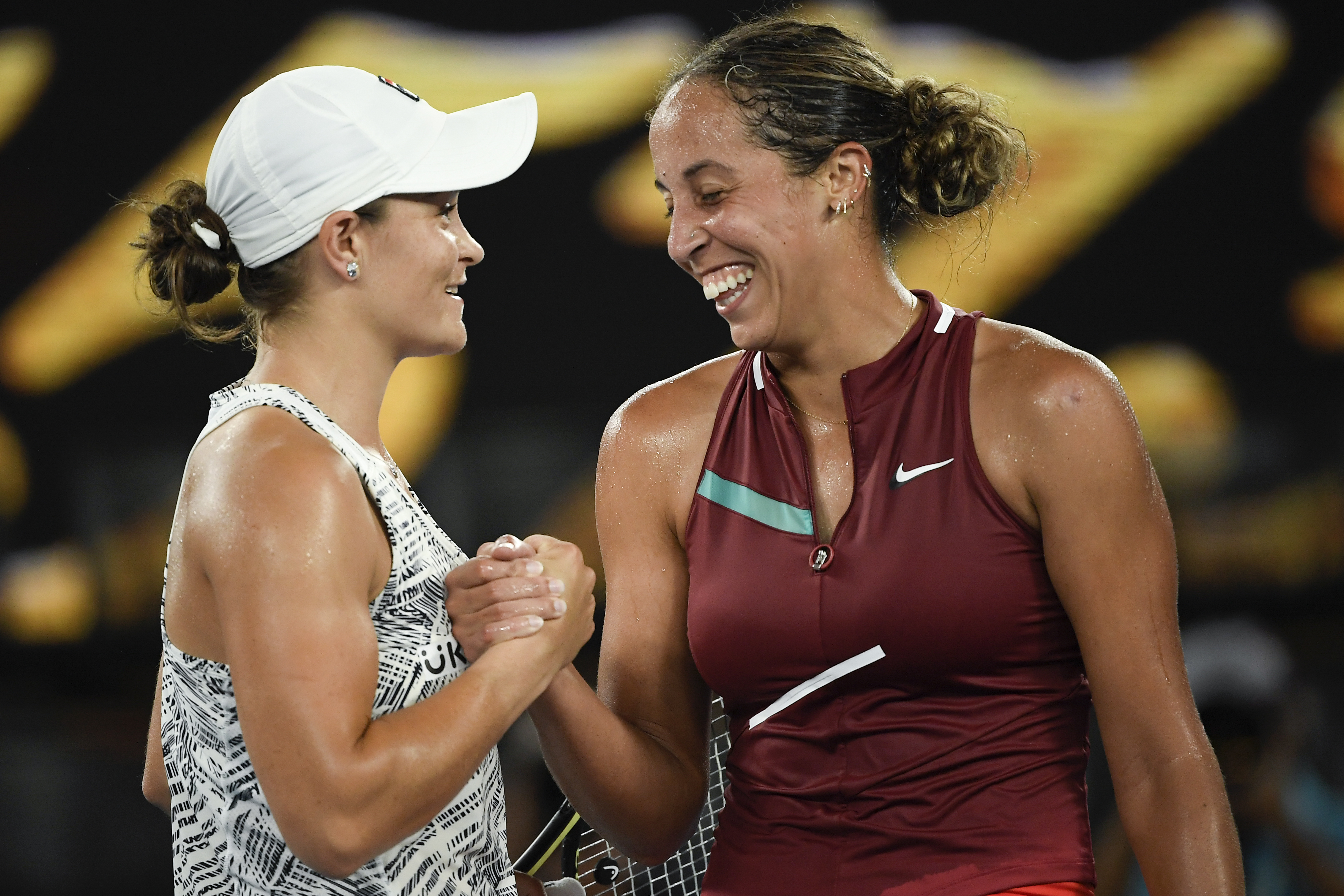