Linden park's drainage project to be finished by end of July 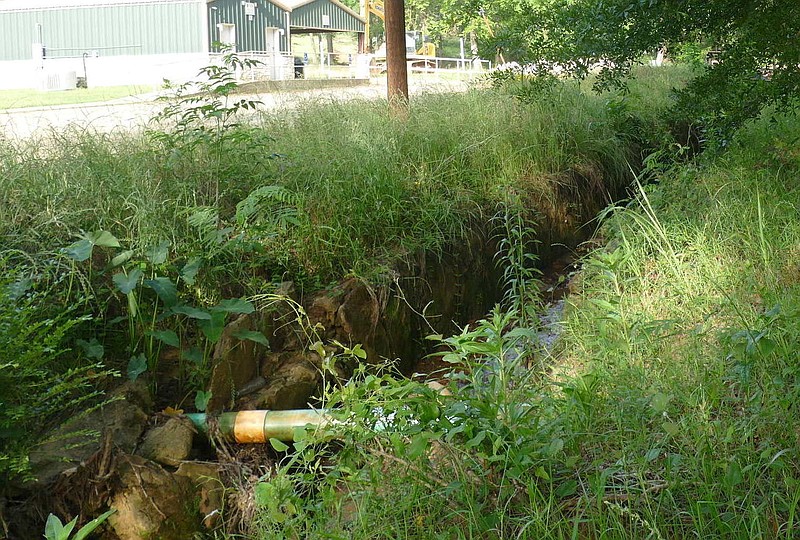 As a reminder, this is how the drainage ditch looked recently flowing through the bottom portion of Linden City Park. The long-lasting ditch with its rock sides had been built years before by the Civilian Conservation Corps. (Staff photo by Neil Abeles)

Linden is getting a more scenic city park as a $2 million storm drainage project nears its finish July 30.

The layering of white riprap stone on the shore of channel, pond and dam has created a continuous view of stone, land and water as the drain curves along the southern side of the park.

The last of the stones were being placed last week by the big machinery of the A. L. Franks Engineering company of Texarkana, Arkansas, contractor for the work. The crews were also replacing the foot bridges over the channel. Straw paths along its sides were placed to prevent erosion.

The scene is one of calm, relaxed pleasure when viewed either from the senior citizens center, the park itself or from the distant grounds of the newly constructed elementary school for the Linden-Kildare Consolidated Independent School District.

Moreover, the terracing of the park's hillside slope, which was also part of the storm drainage project, has created an unusual venue for public gatherings such as family picnics or outdoor community concerts. Lighted community buildings, rest rooms, sanded volleyball court and walking paths are already located here as well.

"We were especially interested in the natural look. That's why you're seeing all the rock, grass and terracing," Linden City Administrator Lee Elliott said.

He quickly gave commendation to Linden assistant city manager and secretary Allie Anderson for her lead in overseeing the drainage project which was as environmentally friendly as possible and of minimum impact upon the drainage infrastructure.

Citizens and city officials have begun meeting to consider community usage of a hiking or biking trail that would connect the channel and its pond, the natural park and its wet habitat with the school and then the Main Street downtown district of Linden.

The storm drainage project had been funded with a $2 million grant by the Texas General Land Office (GLO). The purpose of GLO grants is to restore infrastructure for communities impacted by the floods of 2016. Such funds were awarded by the U. S. Department of Housing and Urban Development through the Community Development Block Grant Program.

The project for Linden involved creating a proper channel for water coming from the town's center to run into a large holding pond located behind the senior citizens center.To create the pond, an earthen dam was stretched across the southern end of the channel. With culvert four feet in diameter and a spillway, the pond will allow for the proper and regular flow of water away from the town's business and residential areas.

By having such a pond, water gets off streets more quickly and with less depreciation of roads. It also improves public safety, city officials noted. 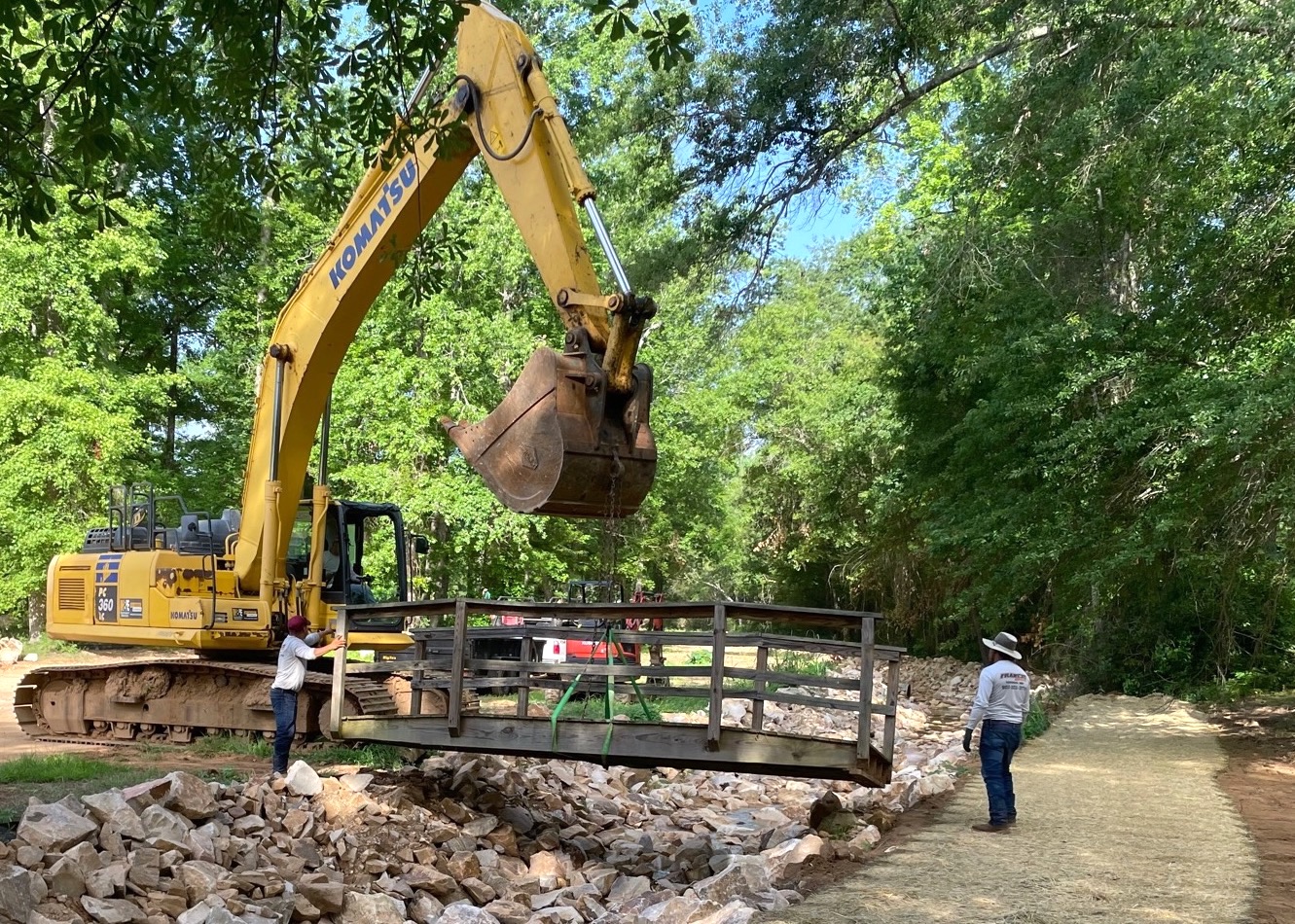 The huge shovel is lifting one of two bridges at Linden City Park back into place after being taken aside while the area’s drainage channel, dam and holding pond were built. The white stone is from an Oklahoma quarry. (Staff photo by Neil Abeles) 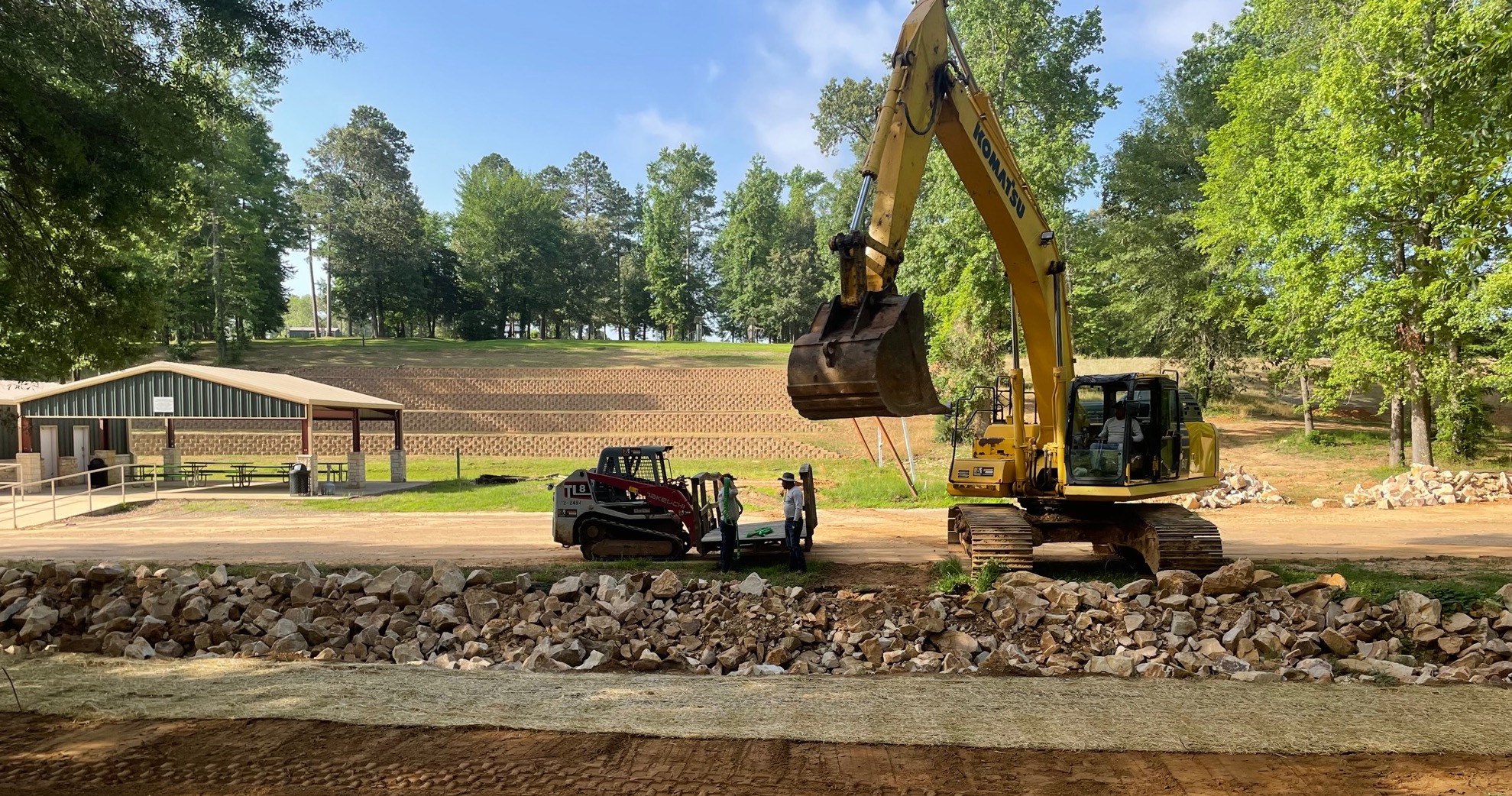 An impressive scene greets the citizen coming to Linden City Park. The view is of huge machinery which is being used to distribute the riprap stone along the storm channel for water drainage. The channel is bordered by straw for erosion control. In the background are community buildings and park landscaping also created for drainage control and terracing which could be used for outdoor stage performances. (Staff photo by Neil Abeles) 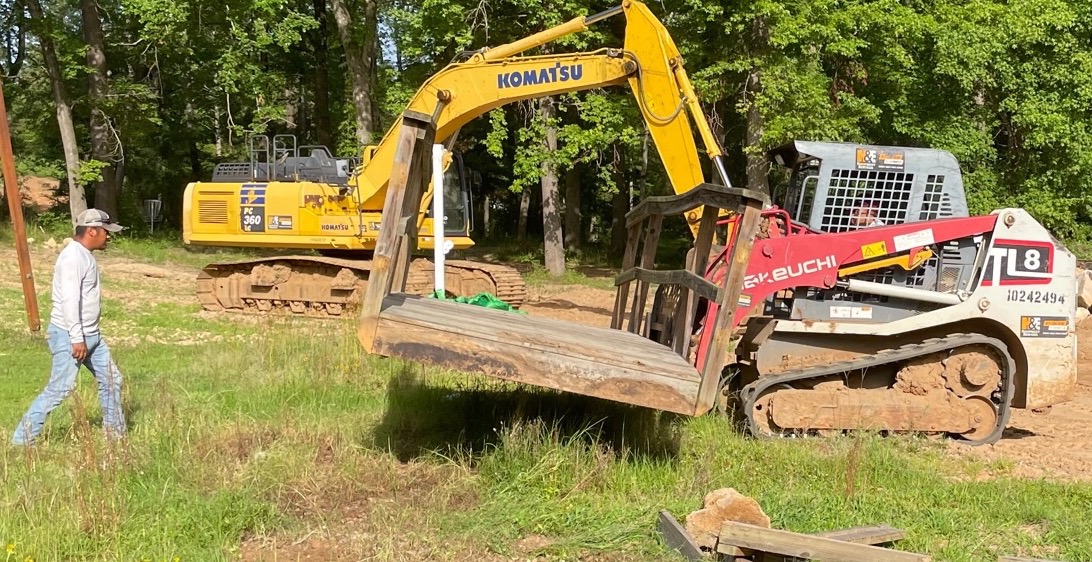 A small size earth moving machine is being used to pick up a wooden walk bridge which had been set aside. The machine will take the bridge back to its place over the storm drainage ditch. (Staff photo by Neil Abeles) 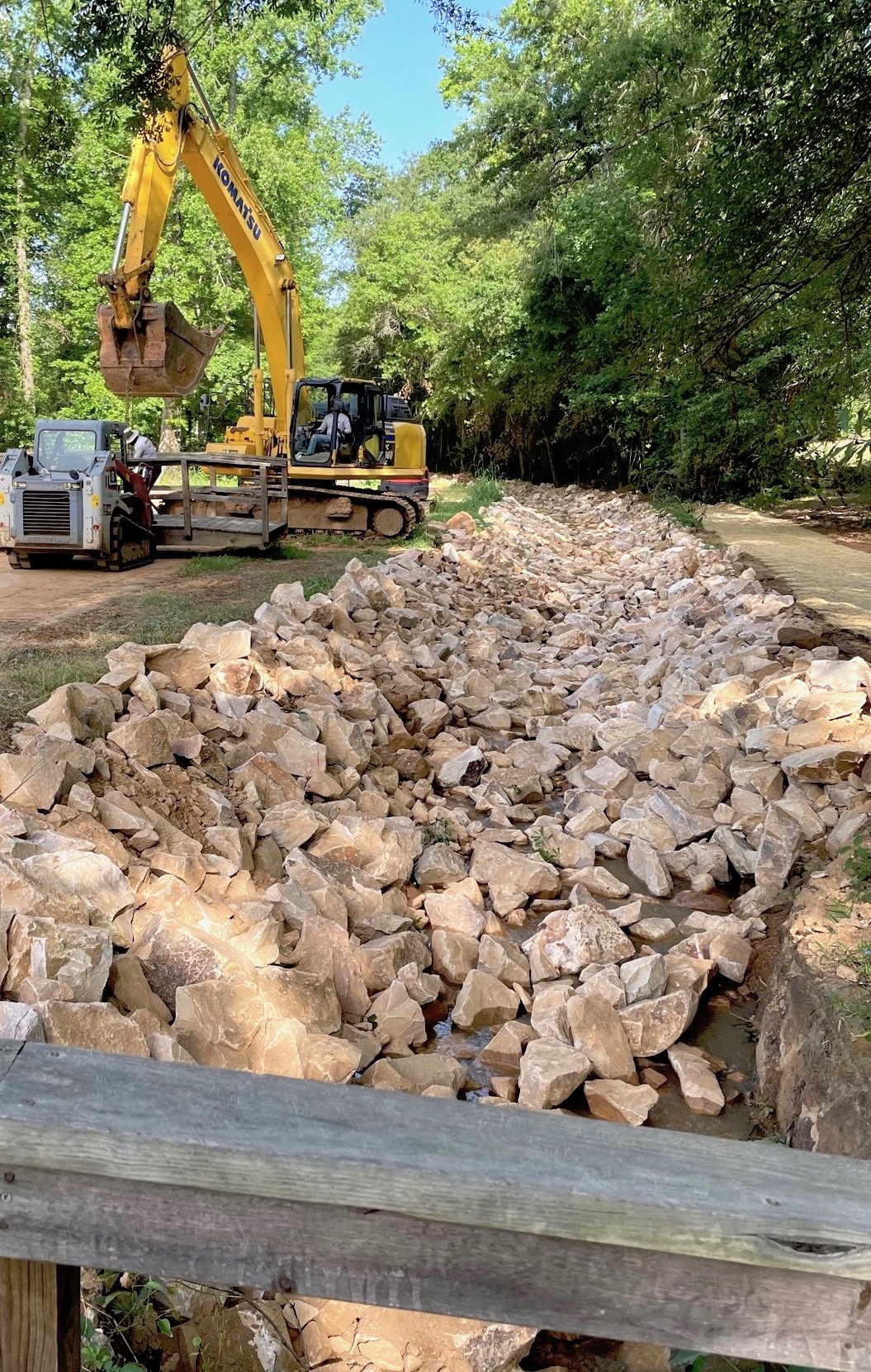 Linden’s City Park look has taken on the appearance of a clean and impressive drainage channel. The view is from a small wooden bridge over the channel. At right what looks like a path is actually straw for erosion control. (Staff photo by Neil Abeles)

Print Headline: Linden park's drainage project to be finished by end of July