A night to remember with crowns all around 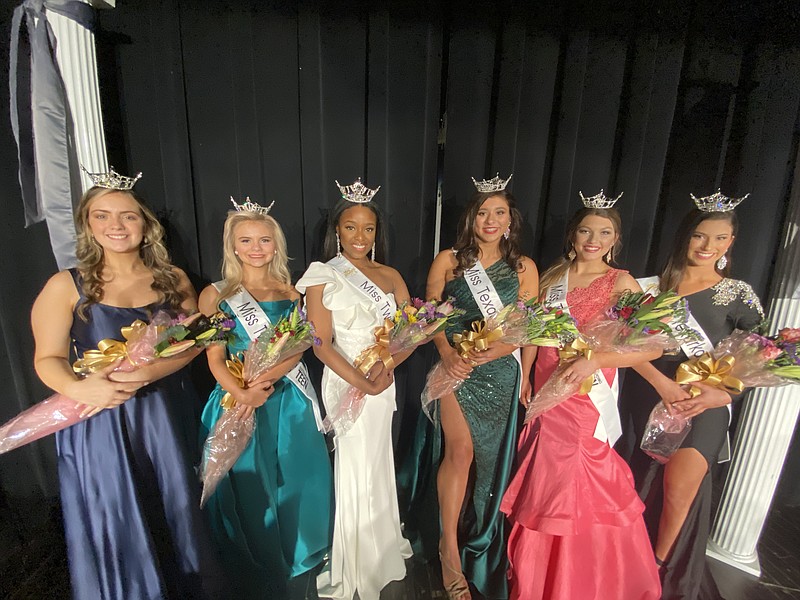 The stage lights were turned bright Saturday, Feb. 26 for Miss Texarkana Twin Rivers candidates as scholarships, crowns and titles were up for grabs on both sides of the state line.

The pageant was held at Arkansas High School.

Catey Lindsey, the co-director for the pageant and her mother, Cristi Hooks, executive director of the pageant, have taken the place of long-time pageant directors, Donna and Mike Berry.

New Miss Texarkana Lizzie Smith will represent the region in Miss Texas. Lizzie, a senior at Texas High School, is a member of the varsity softball team. She said she had practice at 6:30 a.m. the Monday after the competition and did not know how she would be able to sleep when she got home.

Lizzie said this was her fifth year to compete but her first title.

Miss Texarkana Twin Rivers, who will also be representing the region at Miss Texas, is Taylor Nkollo. Taylor is a law student at Southern Methodist University and said she was thrilled to be able to talk about her platform.

"When you learn, teach and when you get, give," she said, describing her platform. "I'm so happy right now and grateful."

Taylor also took home the Miss Congeniality Award and the Most Photogenic Award along with Best Interview and tied with candidate Jordan Jones for Best Overall Evening Gown.

Miss Texarkana Twin Rivers, which will represent the region in Miss Arkansas, is Jordan Jones. In addition to tying with Taylor for Best Evening Gown winner, she won the Overall Talent and the Overall Dancer award.

In the teen competition, Claire Hodge was named Twin Rivers Outstanding Teen. Hodge received an award for the Overall Fitness and Overall Dancer in her category. She also won the Most Photogenic award for her category.

Hannah Crook was named Miss Texarkana Outstanding Teen. She received the Overall Talent award and the Overall Alpha Award, which is for someone who has never competed in Miss America locally.

"I am proud of being named Miss Congeniality because that shows that people are taking me as I hope to come off," she said. "When I get nervous, I tend to make jokes and so it calms me and others down."

The pageant is open to young women ages 13 to 18, and 18 to 26 and those candidates will compete in separate categories.

"The mission of Miss America, Miss Texas/Arkansas, and our program is to prepare great women for the world, and the world for great women," Lindsey said. "We are able to accomplish this mission by providing scholarships to women, opportunities to serve their local communities, and by empowering our titleholders to pursue their greatest aspirations.

The history of the Miss Texarkana Twin Rivers Organization is rich.

Originally there were no competitions based on the states as there are Miss Texas and Miss Arkansas now and so just one selected Miss Texarkana went to Miss America, she explained.

There were 19 candidates in the Feb. 26 pageant.

In addition to other prizes, there were $900 in cash scholarships, including a scholarship for the interview section of the pageant from the Potter and Marks law firm. The overall evening gown for the Miss and Teen competitions was sponsored by the Gracyn Elizabeth bridal store.

Catey, who spent five years competing, was awarded approximately $30,000 in scholarships. She said the best part of holding her titles was having the opportunity to speak to thousands of students and adults on the topics of bullying and fire safety.

Catey, who is from Hooks, had an experience with bullying in high school that caused her to fear for her safety and to lose someone she had once had as a friend.

"I've always said a crown will get you 10 seconds with anyone and if I get those 10 seconds, I can help them and the way they thought about bullying," she said. "If a child told me they felt like they were being bullied, I could talk to them and I could talk to counselors in the school who maybe hadn't thought about bullying in a certain way. All those interactions were made possible by the title."

Catey said it is no different with the candidates this year as they are already getting opportunities to do something good with their crown and title.

She said Lizzie already had a speaking engagement lined up at Texas High. It is the Leadership in Me luncheon and she will be the keynote speaker.

The other winners have a group engagement as well, Catey said.

"They are going to go to a dance at the Runnin WJ Ranch where they will be escorting and dancing the night away with attendees at the Unlimited Dreams Prom (March 5)," she said.

Catey said moments after the pageant that she felt "relived," that it was over. She called it a positive night and she was looking forward to a good year with the new title holders.

"I think we've got a great group of girls and I think it's going to be a good year. It's just been working up until now," Catey said. "We had an excellent turnout and the girls did an excellent job."

Donna Berry, former director of the pageants for about forty years, said she had never competed in pageants but loved working with all the young ladies she met over the years. Her husband Mike was thanked by many of the outgoing title holders for taking their picture and making them laugh. Donna Berry was thanked with flowers, well wishes and applause during the pageant. Shawn Edmonds, longtime co-director, was also mentioned.

Donna Berry said the media, specifically members of the Texarkana Gazette staff, have had a huge role in the success of the long-established pageant. She mentioned Aaron Brand, the arts and entertainment reporter who died suddenly last year, and longtime editor Les Minor, who just retired.

"Aaron Brand is one of the main reasons it existed so long, along with the whole Gazette staff," she said. 'Les and Aaron were so instrumental in our success. I have asked Les so many times to judge Miss Texarkana and he always said no."

When she first started her job, she did not suspect that being a director of a pageant such as Miss Texarkana Twin Rivers would be as difficult as it was.

Print Headline: A night to remember with crowns all around